Video and autofocus don’s usually go hand in hand. After all, focus is a creative decision and the camera, sophisticated as it may be, can’t know where you want to focus in a scene. 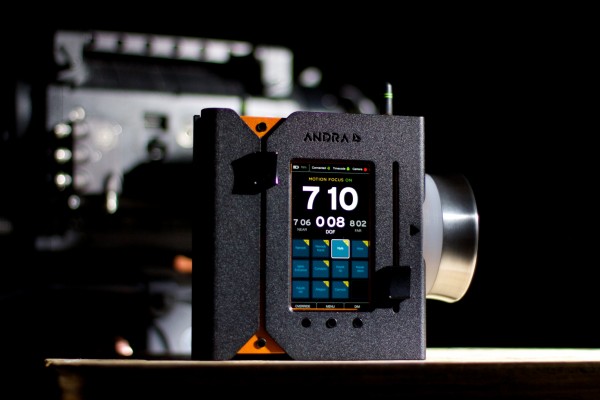 What you usually do is pre-mark focus points and change between them using a programmable follow focus or a focus puller (think a person dedicated for shifting focus).

Andra seemed to have solved both issues in an ingenious way. It provides state-of-the-art iPad controlled follow focus, which is nice, but not new. What’s new is the way they pull autofocus and focus shifting. Rather than pre-focus key elements of the shot and mark them, the Andra system allows using a small sensor to continuously monitor a an object in space.

This makes the Andra ideal for freestyle shots like when shooting mounted on a MŌVI when camera to subject distance is not 100% accurate.

Another interesting use case would be a live session where actors don’t have to be 100% on their marks.

The system is essentially a hybridization of a motion capture system and a remote focus pulling system. Using a portable and easy to set up magnetic mo-cap system we’re able to very accurately track subjects and cameras in real time and use that data to drive a lens control motor. The mo-cap side of the system uses very small sensors which can be mounted to the performer beneath clothing, just like a lavalier microphone. The user can then decide where they want the focal point, relative to that sensor, and the system does the rest. We are able to get very impressive accuracy which, most importantly allows you to get really crisp eye focus. We don’t just target the general area of a person, we get the focus right where you want it.

There are two ways to interface with the system. The basic approach to use an iPad, which opens up a whole new world of creative options. Another option is to use the hand unit (The Arc) which is similar to hand units currently on the market except that it has a touch screen interface and offers an incredible range of new features, like the ability to simply sequence between desired focal points by simply hitting a button or turning the dial back and forth.

Range and versatility of the device is impressive, according to news shooter:

The Standard Package uses two sources on a boom pole mount which gives a 24 ft x 16 ft area of coverage. This means that subjects can get up to 24 feet from camera. However, it is possible to use fixed nodes at longer distances, where depth of field is more forgiving, which allows performers to move in and out of the capture range

Here are some of the more interesting features of the system:

The system has been in development for 4 year which along with the high end control may explain the price point – about $12,000 for a full system (not including the iPad), but not yet available for pre-order. Luckily it if you visit NAB (booth C9548) you can have a go at trying to challenge it.

« “Louisville In Motion” – An Incredibly Cinematic Time-Lapse Video
Creating A Blurred Soft Look With A Smartphone For 0.1 Cent »