The Universal Serial Bus has come a long way as a technology; it is now a standard in today’s electronics and gadgets for work and play.

Computers and peripherals interact through USB ports. As you can see here, legacy serial and parallel ports once dominated the scene. Under this setup, a keyboard, mouse, external monitor, printer, and all other PC accessories have a corresponding custom port to communicate with the computer.

There were, however, problems with the usage of such legacy computer ports. For starters, peripherals might have been incompatible with the ports available. Data transfer also lagged with mere kilobytes per second although, between parallel and serial ports, parallel ports boasted faster transmission speed. Not all computer ports could run at once when in use under this scenario.

USB came along in the 1990s and changed computers and devices forever. There’s the standardization of ports replacing some, if not all, old computer sockets with a uniform one with supported cables and connectors. Data storage, transmission, and portability have also received a boost from USB.

Surely, you want to brush up on your knowledge about USB, the nitty-gritty of this handy, everyday technology from its history to terminology. And because electronics that use USB run aplenty, learning more about the versions, types, and solutions is indispensable. This technology is evolving to respond to ever-changing times, and you are on the right page.

What does a USB do?

From a then-struggling standard, USB has lived up to the universal in its name as millions, if not billions, of devices have adopted it.

What’s in it for you?

Versions of USB: History of releases and revisions

A summary: Ajay Bhatt and his team invented USB, whose development began in 1994. The first version, USB 1.0, was released in 1996, but it was USB 1.1, which debuted in 1998, that gained extensive usage. The rest is history, as follows.

This version is historic because it led to the creation of legacy-free PCs, whose legacy ports were replaced with USB ports or rendered obsolete. One stellar example is Apple’s iMac G3, which was released that same year; the computer lacked a floppy disk drive and featured USB 1.1 ports instead.

With USB 3.2 superseding the older 3.x specifications, things are bound to get confusing with the names. Accordingly, the USB group has come up with the following guideline: 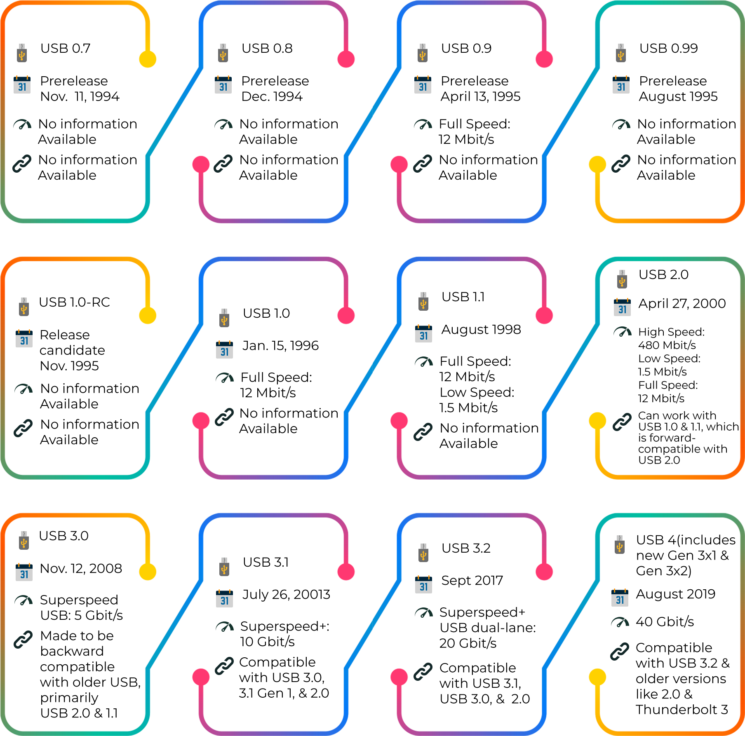 USB: Getting to know the hardware

Since you now know the technologies behind USB, it’s time to focus on the physical things that make the connections. This section covers the following:

ou can identify USB by its type, which refers to the cable and the plug found at the end of the cable itself. This free-hanging plug is called a male connector and is inserted into a port or receptacle called a female connector, which is embedded on the device. Shapes, colors, and sizes are used to classify USB connectors whose speed of data transfer relies on the version of the USB technology.

The standard connectors are the default size used in computers, printers, and other gadgets.

USB Micro-A and B connectors have superseded mini-USB because of their size (they can fit into thinner devices) and durability of 10,000 cycles, twice as much as that of the mini-B variant.

Through this specification, a device that is not a computer can function as a host to another device. For instance, a smartphone can read data from a USB flash drive.

Not all Android devices support OTG. If your device has the functionality, you will find a receptacle for micro-USB or USB-C. In the alternative, use an adapter for full-size USB ports.

USB OTG has a Micro-AB receptacle, which superseded Mini-AB, as noted above. This port accepts a Micro-A or Micro-B plug.

USB 3.0 and onward introduced SuperSpeed, and this development brought its standard and microsize connectors.

Can you identify connector plugs?

The pinout, or pin connection, is integral for the connectors to support the speed and performance of the underlying specification. 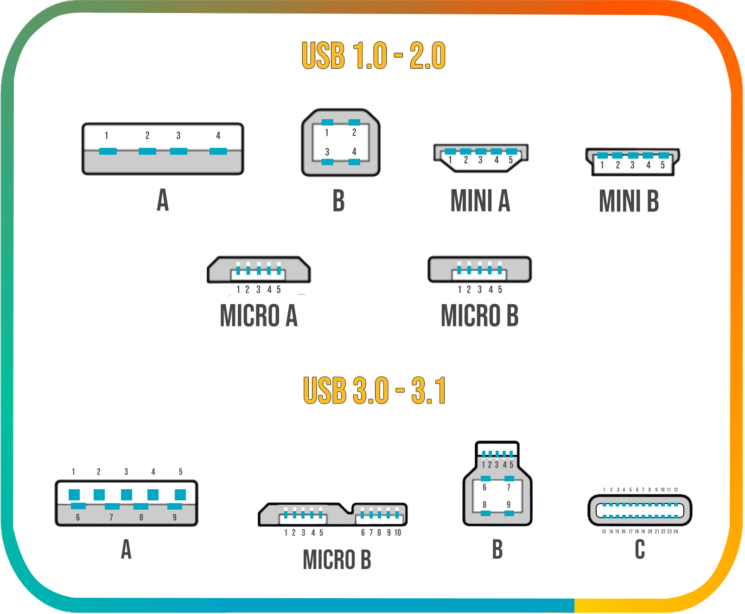 Ports and plugs go together. Connectors work in tandem with the one found in the cable or board-mounted (as in the case of USB memory sticks) and the other on the host device to enable mating.

Aside from USB Type-C, some connectors, like Micro-B, can be reversible. Otherwise, most connectors contain labels or symbols to orient the user on which way to insert the plug into the port.

Another way to distinguish USB connectors is through colors. This color-coding scheme is not imposed but recommended.

Naming conventions for USB cables are as follows:

So a cable that has Type-A and Type-C connectors is called a Type-C cable. Your Android phone has a micro-USB cable, and so on. When the cable has both Type-A connectors (male to male), then it is called Type-A cable.

You can also use USB extension cables, such as USB 2.0 Type-A Male to Type-A Female. Interestingly, cable lengths matter to older USB standards. Under USB 1.1, devices that operate at Full Speed can have a cable that spans five meters at most; devices at Low Speed, three meters. When USB 2.0 came along, cables could run up to five meters for devices operating on High Speed.

The maximum cable length does not matter as much to USB 3.0, whose primary requirement is for the cable to meet electrical specifications. After all, SuperSpeed requires differential pairs of wires to transmit information, and a USB 3.0 cable contains more wires than USB 2.0 does. Nonetheless, experts note that USB 3.0 cables using 26 AWG can have a maximum length of three meters.

When you hear the term USB, you think of devices that are attached to or plugged into the computer. Such attachments are classified as functions and hubs and are collectively known as devices.

This USB-C adapter, for example, has three USB 3.0 ports, an HDMI port (thus USB-C to HDMI), a Gigabit Ethernet port, memory card readers, and a USB-C PD input. Moreover, hubs can be passive or active. They are called bus-powered when they derive power from the host computer; they’re self-powered when they have an external power supply.

A USB charger has a cable with a Type-A connector that is inserted into the charger’s body and another connector, such as Type-C, that is plugged into the device. Airports, malls, and other public spaces typically have USB sockets for charging.

When you attach a device to a USB system, it gets assigned with an address that is unique at the time it was connected. The USB device has endpoints, or data buffers, and each endpoint has a pipe where the transfer of data between the USB device and the USB host happens.

Now, USB data is transmitted in packets that are then bundled or grouped into frames to complete a message. In the transmission of data where it is broken into bytes and bits, the least significant bit always goes out first.

There are four main types of packets:

USB drives offer to store large amounts of data in removable, portable, and durable (sometimes aesthetically appealing) solutions. You surely have ways to access, save, and send files online, but you always have USB flash drives to back up virtually all kinds of electronic files.

Common misconceptions about Thunderbolt3 and USB-C

Thunderbolt is a trademarked technology that offers fast data transmission and charging power. The first two versions have Mini DisplayPort interface, while the third one has a USB connector.

USB-C and Thunderbolt 3 Are Interchangeable and Function Similarly

Thunderbolt 3 is a USB-C port but faster, more versatile, and more powerful. Here’s a quick comparison of the two’s properties:

*The data connection speed of 40 Gbps works as long as the cable is 1.6 feet or shorter.

Thunderbolt Is Exclusive to Apple

Intel indeed developed Thunderbolt with Apple, which has carried such ports on its laptops and desktop computers like the MacBook Pro and MacBook Air. Intel, however, wants more products to incorporate the protocol.

What’s next for USB?

USB4: Coming to Devices near You

Offering the fastest data transfer rate to date and other capabilities, USB4 is the subject of much anticipation. However, consumers will likely see the first batch of USB4 devices sometime late 2020 or early 2021 as it can take 18 months for devices to adopt a specification following publication.

USB-C: The Present and Future of Port

Wired reported on USB-C’s rising popularity with the latest (at the time of writing) from Microsoft Surface, Kindle, and PlayStation. The most recent iPhones still trail behind, although the iPhone 11 Pros have a USB-C-to-Lightning cable so you can charge the phone into the MacBook Pro’s USB-C port.

As it is, USB-C has killed the headphone jack with Samsung embracing the connector standard in Galaxy Note10. The company is the biggest smartphone maker with a 23 per cent global market as of the second quarter of 2019.

USB has been hailed as the king of connectors or the port that changed everything. But at the end of the day, it is that cable or port that makes your life easier as you charge your phone, save files, or access your peripherals on your laptop.

You can be sure to find the most up-to-date and powerful USB hubs and docking stations at Juiced Systems. Whether you have a USB-C laptop or one with ports on USB 3.0 standard, come and check the collection of multiport adapters for a more productive lifestyle.

Established in 2008, Juiced Systems is a developer and manufacturer of USB devices including docking stations, hubs, adapters, power supplies and various other devices. You can find out more about them and their products on the Juiced Systems website. This article was also published here and shared with permission.

USB4 is coming, with a Type-C connection and 40GB/sec bandwidth
« How to use a smartphone controlled turntable to shoot professional 360 product photos
How to create photo prints with beetroot juice »