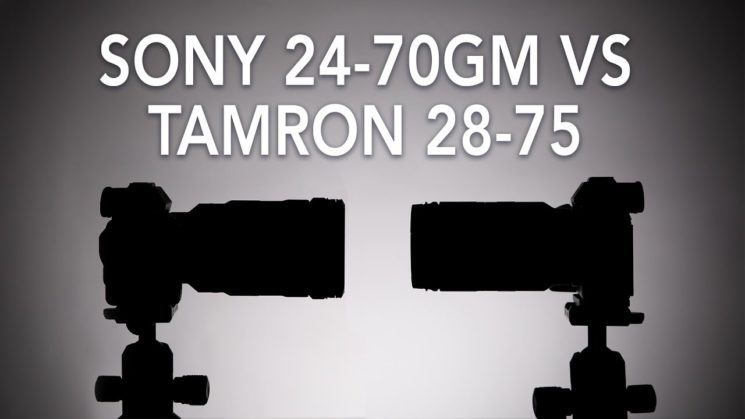 When buying a new lens, a common dilemma is whether to go for a native or a third-party lens. The third-party lenses are usually much cheaper, but how good are they? In this video, Jay P Morgan and Kenneth Merrill compare two standard E-mount zoom lenses for full frame Sony cameras: an $879 Tamron 28-75mm f/2.8 Di III RXD and a $2,198  Sony FE 24-70mm f/2.8 GM. How do they compare in terms of sharpness, image quality, and autofocus for both photo and video? Check out the video below for more details.

When it comes to bokeh, its quality looks pretty much the same on both lenses. But when Jay and Kenneth test the edge-to-edge sharpness, Tamron seems to take the advantage again. The corners seem sharper when zoomed out completely, and the Tamron and Sony even out as they get zoomed in. So, this is pretty much consistent with the results they got when photographing portraits.

Next is focus-closeness test. The Tamron lens can reach the closest focus at its widest angle, and it’s about 7.5 in from the subject. With the Sony lens, the closest focus point at 24mm is 15 in, but you can zoom in a bit for the same effect.

Now here’s something many of us find important: the AF eye tracking. Judging from Jay’s and Kenneth’s test, both lenses performed equally well in this category.

The guys also tested both lenses for video. Kenneth says that none of them is the best choice for video because of the electronic manual focus. However, you may find yourself in a situation when you’ll need to use them for video shooting, so why not test them.

The first test is for focus breathing, and the Sony lens doesn’t seem to have this problem at all. There is some focus breathing with the Tamron, but it’s negligible.

Next, the guys shot into the sun to test both lenses for flare. I believe this is a matter of personal preference, but Jay and Kenneth prefer flare of the Sony lens, and so do I. However, since modern lenses are designed to reduce flare, if you want to achieve this effect – it’s a better idea to use vintage lenses.

Judging from Jay’s and Kenneth’s tests, it seems that the Tamron edges out a little bit. Both lenses have great performance, but the Tamron is a tad sharper than the Sony, especially at the wide-angle side. And considering that it’s 2.5 times cheaper than the Sony… I believe I’d go for that one.

What do you think? Which of these two lenses would you go for?

« How to approach commercial product photography to achieve the best results
Sony is combining camera, mobile, audio and TV into a new “Electronic Products and Solutions” division »