This past July, Adam Sherwin posted a list of 40 movies about photography that “every photographer should watch” over at Resource Magazine. When I first saw the list, I had already seen quite a few of the films mentioned, but it also led me to discover a slew of other photography related movies I hadn’t heard of before. Since then I’ve been working my way through the curation. While I probably won’t watch all of the films (honestly, they don’t all look interesting to me, as I’m sure they won’t all look interesting to you, too), I have seen a little over half of the titles so far, including those I had previously watched.

Here’s a list of some of my favorite (and not so favorite) films from the list, but be sure to head over to the original post and check it out in entirety. There might be some gems listed for you to discover, as well.

Annie Liebovitz: Life Through A Lens

I love Annie, both as a person and a photographer, and this documentary offers a rare and candid look at her life. Her life has been full of exciting adventures, as well as adversity, and Life Through a Lens gives takes you on an inspiring ride through the life of one of the most celebrated photographers in modern times.

How to Make a Book With Steidl

I enjoyed this film, admittedly, because of my obsession with printmaking and being able to go inside the mind of one of the last print masters in the world is really a treat. I wish this film had been a little more in depth and offered a little more background on the photographers, any time spent with Steidl is well spent in my eyes.

As influential as Ansel Adams has been, and will continue to be, in the photography world, anyone even remotely interested in photography should task themselves with studying his work, career, and principles. Even if landscape photography isn’t your thing, Adams was truly a master of the craft and there’s plenty of to be learned from him.

Again, we’re offered a glimpse into the life of one of the greats. Henri Cartier-Bresson, needs no introduction.

Honestly, I could have just kept going with the documentaries simply because I find the genre highly interesting, but since we’re not always in the mood to learn something here’s a couple selections that are geared more towards entertainment than education.

This film is gritty, hard hitting, and, for most of us, takes us into a world we’ve never experienced–the slums of Brazil. The description of this film on Amazon simply reads: “Two boys growing up in a violent neighborhood of Rio de Janeiro take different paths: one becomes a photographer, the other a drug dealer.” Though photography does play a central role in the film, as mentioned in the description, it’s a bit more complex and deep than that. I saw this film about 10 years ago, at a time when I was pretty focused on non-photography related goals and remember loving it then. I’m adding it back onto my list now that I have a bit more vested interest in photography. 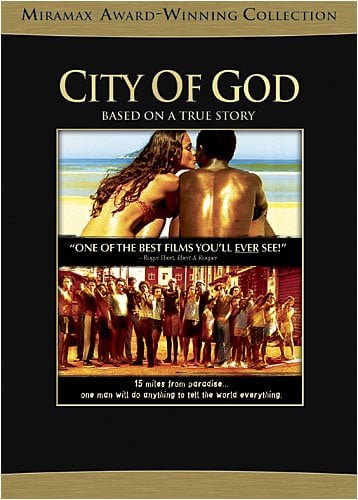 The Secret Life of Walter Mitty

Ahhh, Ben Stiller. An unpopular opinion it may be, I never really cared for Ben Stiller. Just not my cup of tea. Had I not been advised to watch this film from a friend whose opinion I trust, I probably wouldn’t have given this one a chance. I’m not sorry I listened, but I do admit that had this film been about something other than photography and a lost negative, I might not have been so keen to take the advice. To be fair, though, that has a lot to do with personal preference and my interest is usually piqued a bit more by other film making styles. That being said, The Secret Life of Walter Mitty is a fine film. One shouldn’t let the snobbish opinions of critics (like me) stop you from enjoying it.

As mentioned, the above selections are from a list printed in Resource Magazine titled, “40 Movies about photography every photographer should watch”. As I’m sure you were quick to notice, there are few titles that didn’t make the list. The Bang Bang Club, for example doesn’t appear in the article; however, a lot of Resource’s readers were sure to include it in the comments. Which is where you come in. Was your favorite photography related film left off the list? Let us know your top picks in the comments, regardless of whether or not they made it past the cull!

Why you should study bad movies to improve your filmmaking