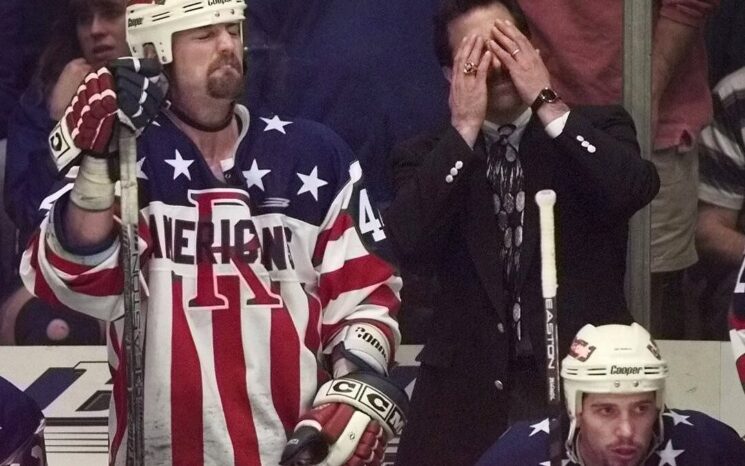 When I received my Nikon Z 9 in late December, I was a bit anxious. Would it live up to the hype? Was it going to be the camera that Nikon had promised (and many Nikon users had been waiting for)? Right away that first day my concerns were put to rest, and over the course of the following week, the more I learned, the more I liked it. That resulted in a long, mostly glowing, blog post. And as I continue to use it, I continue to be impressed. That got me thinking about this digital photography journey I’ve been on for the last 25 years. It’s gone from ugly to awesome.

In 1996 my boss at the newspaper in Rochester, NY, returned from a photojournalism conference where he’d been told, “digital photography is the future.” So he went out and bought one, a state-of-the-art digital camera, the Kodak NC2000e (“News Camera for the new millennium”). Starting life as a Nikon N90s, Kodak then turned it into a digital camera (ala Frankenstein). Since I was the computer geek on staff, he handed it to me and said, “see what this can do.” The results weren’t pretty. It recorded 1.3 megapixel images (1280 x 1024 pixels!) on a removable hard drive. There were four ISO choices, 200, 400, 800 and 1600, but 800 was so noisy it was hardly usable. 1600 was good for laughs. With white balance, even if you were careful, images tended to have a magenta cast. The battery was built in, so if it died while you were out (an almost daily occurrence), you had to plug it into a portable, but heavy, external battery. You got all of that for the low, low price of just $15,000. Oh, and there was no LCD for reviewing pictures. Shoot and pray. Despite all that, it revolutionized newspaper photography. 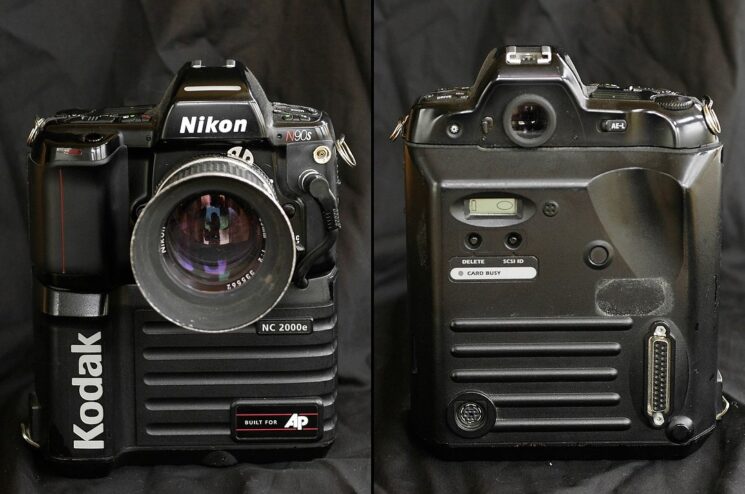 Prior to digital cameras, before you could submit a photo for publication, the film had to be processed and a print made (or eventually, the film scanned to digital). Take away film, and you take away the need for processing. No more frantically watching minutes tick away on deadline waiting for film to finish. No more traveling with portable processing kits to turn hotel bathrooms into darkrooms. Now, simply removing that small hard drive from the camera and connecting it to a computer meant you could “process” your photos anywhere, anytime, and then transmit them to the paper. Even if you weren’t traveling, it meant you could stay longer at an event because you didn’t have to factor in time to process film when returning. 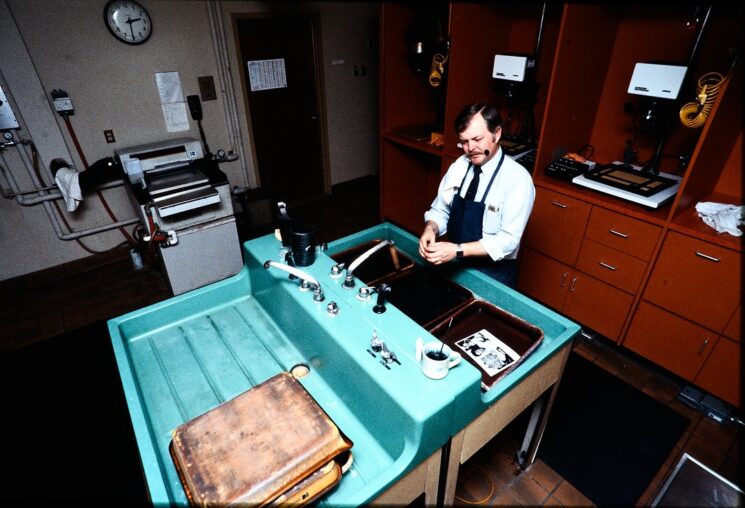 Burr Lewis, staff photographer at Gannett Rochester Newspapers, in the print lab in 1990. This was the nicest darkroom I ever worked in, and was state-of-the-art for its time.

Sure, the quality wasn’t great, but neither was reproduction at most newspapers. In spring of the following year, 1997, our paper became one of the largest in the U.S. to do a total digital conversion (and the only newspaper to issue each photographer two cameras). Luckily, by then, the price had dropped to only $13,000. In an effort to make the change as successful as possible, every photographer received not just those two cameras, but a kit of fast-aperture zoom lenses (at 1.3MP, you didn’t have the luxury of cropping, you had to frame tightly). Since going above 800 ISO wasn’t realistic, every person also received a lighting kit, and the staff shared two larger high-power kits. That’s because every indoor high school sport we shot had to be lit. We were on the the bleeding edge of digital photography, and it was challenging. 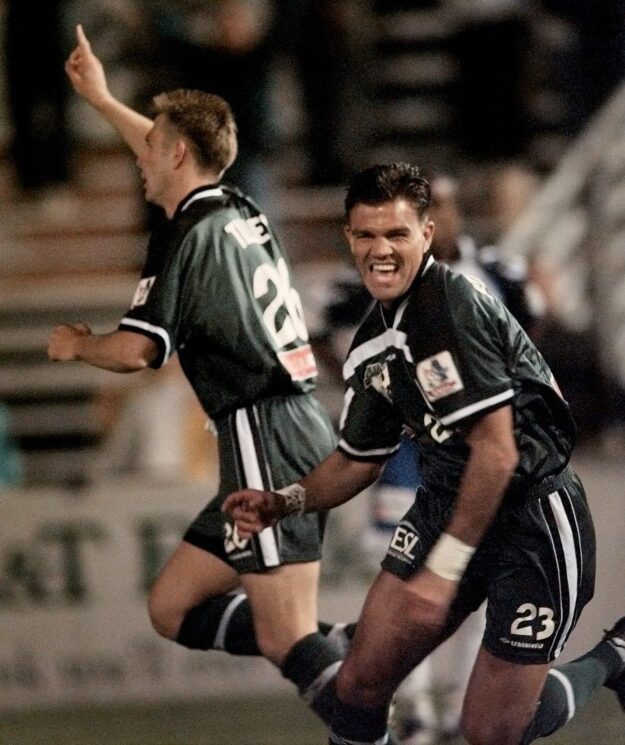 Covering professional sports, indoors or out with the NC2000e was a challenge at best. Low shutter speeds, fast apertures, lots of noise and questionable color. The image at the top of this story was also shot with that camera.

However, the photographers weren’t forced to shoot digital. Each staffer was allowed to keep one film camera and told that if they couldn’t do the job digitally, to go ahead and shoot film. And you know what? After six months, no one shot film again. Despite all the challenges – the low resolution, the poor high ISO performance, the slow frame rate (2 frames-per-second!) and overall poor quality – the convenience and speed of getting images out trumped everything else.

By mid 1999, the major camera manufacturers were starting to build their own digital cameras, from the ground up. Instead of a Frankenstein-type camera, we got the Nikon D1. It recorded 2.7-megapixel images on removable CF cards, had a rear LCD, a frame rate of 4.5 fps, 200-1600 (with 1600 actually usable) and a removable battery among many other great (for the time) features. About eighteen months later Nikon released new versions with more advanced features (the D1X and D1H), and the race was on, mainly between Nikon and Canon. Kodak was left in the dust, and is now a case study at business schools.

Since getting that first D1 in early 2000, I’ve now shot (and taught) a total of 52 different Nikon digital SLRs and mirrorless cameras. Many were incremental upgrades to an existing design, but some, like the D3 and now Z 9, were groundbreaking in their features and image quality. 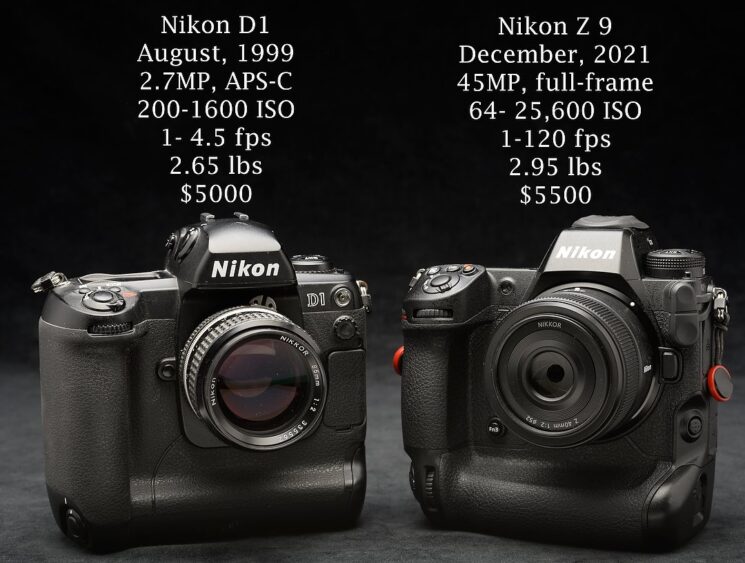 HereÕs a quick comparison of the first Nikon digital camera I shot, the D1, and the latest, the Z 9. The purchasing power of $5000 in1999 dollars would be equivalent to over $8300 today. 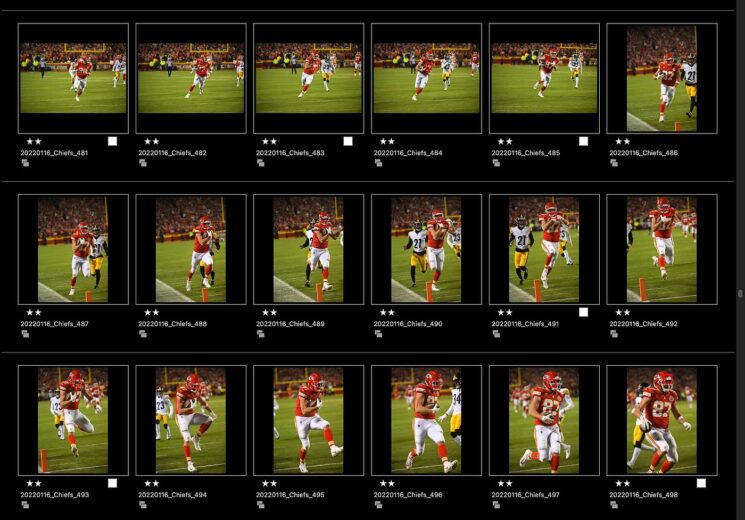 Shooting the Chiefs/Steelers game with the Z 9 last weekend, I used the Wide Area AF (L) area mode on the Z 9. HereÕs part of a 28-frame sequence of Travis Kelce making a catch and running in for a touchdown. I was using the Nikkor 200-400mm f/4 lens, and zooming out as he ran towards me. NikonÕs NX Studio software can show me where the autofocus system is focused in each frame, and in these 18 frames from that burst, it shows that first itÕs on his body, but then quickly shifts to his eye, and stayed there even when he was filling the frame from the waist up.

So what does the future hold? Honestly, I have no idea. I always remember back to the days when we first got 6-megapixel, and then 12-megapixel cameras. Each time we thought we’d died and gone to heaven. And honestly, who needs more than 12-megapixels? But, as we all now know, if we can get more resolution while still having great high-ISO (low-light performance), we’ll take it. And autofocus that can grab the eye of a fast-moving person or animal, even if they’re not a large part of the frame? Yes, please!

I only know that whatever the future brings, I’m looking forward to it. I just hope that twenty-five years from now (providing I’m still around,) I’ll look back on 2022 and say, “Oh yes, we thought we had it good back then, but now…”

Reed Hoffman has been a photographer for over four decades and he is currently based in Kansas City. Other than collaborating with a number of newspapers, magazines, agencies, and corporate clients, Reed has also been a photography teacher since the 1990s. Make sure to check out more of Reed’s work and find out more about him on his website, Instagram, Twitter and Facebook. This article was also published here and shared with permission.