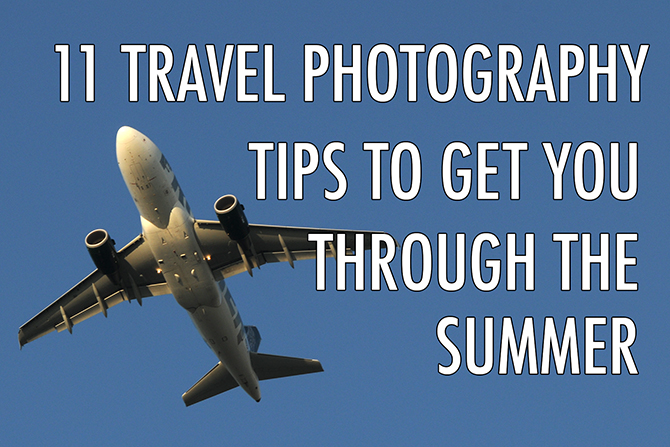 It’s summer once again and the fortunate among you will be hitting the road, hopping on planes, maybe even boarding a ship or two, and getting the hell out of Dodge for some hopefully stress-free rest and relaxation. Regardless of whether your travels are taking you around the world or just a day’s drive from home, it’s important to not only pack your camera gear carefully, but to also spend time putting some safeguards in place to make sure that you and your gear not only make beautiful travel photography together, and that you both get home safe and sound.

Unless you’re traveling on assignment, this is not the time to cram every bit of gear you own into a woefully inadequate bag just because you can. At some point you have be selective about what goes and what stays. Nowhere is this more evident than in lens selection. Start by thinking about your destination and the types of photos you hope to capture. Will your trip be taking you through rolling countrysides and wide-open spaces, or will you be photographing wildlife? Street photography in exotic open-air markets, or scenery of a land you never thought you’d ever get to see first-hand? If you’re anything like I am, you’re going to want lenses available to help capture both the wide-angle shots of a 16-35 or a 24-70, as well as the zoom shots of a 70-200. Think carefully before packing all three. You’re a photographer, not a sherpa, and I’m guessing that your family wants to spend at least a little bit of time with you on this trip. There are some good choices out there for “all-in-one” lenses, which could be well worth renting for a week or two if you don’t already own one. If the all-in-one isn’t your style, think about the two lenses you’re most likely to use and leave the third at home. Packing light will also provide benefits that we’ll get to in a minute.

The more you decide to take with you, the easier it’s going to be lose track of something. Do yourself a favor. Make a list of everything you’re taking with you. Then print two copies of the list. Leave one at home and take the other with you. Just make sure that you pack the one you’re taking with you in something other than your camera bag. If you become the unfortunate victim of a theft, being prepared with a list you can turn over to law enforcement will make the experience slightly less traumatic. But only slightly.

It’s All About the Bag.

Okay…so maybe it’s not ALL about the bag, but it’s pretty close. Obviously, you want something that is going to protect the gear, but you also want something that’s going to enhance the enjoyment and safety of your trip, rather than hinder it. Good travel bag options include the Think Tank Airport Series of backpacks, the Loka UL from F-Stop Gear, and the Rotation180° Panorama from Mindshift Gear. The Panorama is great choice– especially if you’re only traveling with minimal gear– because it has a gear section that rotates around to the front without actually taking off the backpack. You also want to make sure you’re not carrying a bag that screams to the world, “I’m a camera bag! Come steal me now!”

Speaking of the Bag…Don’t Put it Down.

Don’t forget that you’re in a strange place. You’re unfamiliar with your surroundings, and you may be paying more attention to getting the shot that you are to what– and who– is going on around you. Only put your bag down if you are traveling with someone who can keep an eye (or a hand, or at least an alarm) on it for you. Even just laying it at your feet is like walking up to a total stranger and handing it over to them.

And Whatever You Do, Don’t Check It!

I think we’re all pretty much in agreement that checking your camera bag is a monumentally bad idea. And if you happen to be one of those travelers who is told by an otherwise perky flight attendant the all of the overhead bins are full and your camera bag will have to be checked at the gate, stand your ground. Don’t be rude. Don’t be a jackass. Simply explain how much your precious cargo would cost to replace. Make sure that your camera bag complies with whatever airline requirements you’re up against. If not, you’ll be fighting a losing battle to retain control of your bag. Keep in mind that requirements for international travel will differ from those for domestic trips.

Be Inconspicuous in Your Surroundings.

It’s tough to not look like a tourist when that’s exactly what you are, but you may want to try. Shooting street photography with a zoom lens as long as your arm, for instance, isn’t exactly blending in. If you act like a target you’re eventually going to become a target and all of the time, planning, and effort that went into this trip will be for nothing. This doesn’t mean that you hide in the shadows on the outer fringe of activity. If anything, you should be taking advantage of the opportunity to immerse yourself in new cultures and surroundings. One way to do this might be to consider leaving the big guns at home and opting instead for something smaller like the FujiFilm X-T1 or another mirrorless set-up. Smaller cameras go a long way to being less obtrusive, as well as less invasive. The lighter gear also makes traveling with it a whole lot easier.

And While We’re on the Subject…

Depending on just how sketchy your destination is, you might want to think about using a few small strips of gaffers tape to cover up the logos on your camera. If a thief can’t identify his or her prey, they might just decide to leave it– and you– alone. I know of at least one photographer who puts a few strips of packing tape around his camera body to make it look like it’s hanging on for dear life. Nobody’s going to steal something that looks like it’s one click away from the trash heap.

Don’t Put All of Your Eggs in One Basket.

There was a time when this 256mb CF card cost more than some of my monthly living expenses. A lot’s changed since then, and the cost of CF and SD memory has plummeted. Even if you’ve been shooting with 128GB cards, do yourself a favor– by extra cards. Personally, I switch to 16mb or even 8mb cards during a trip, and I switch to fresh cards long before I run out of space. Even though I try to back up my cards at the end of each day, this is not always feasible. If something is going to go wrong, I’d much rather it go wrong with one card of several, rather than the only card of the entire trip. If something goes sideways, it’s better to lose some of your images than of all of them.

If you are traveling for work-related photography– especially if it’s international– make sure you have quick and easy access to any necessary work permits or written verification from clients regarding the particulars of the assignment. Avoiding thieves can seem like a walk in the park compared to getting past unfriendly foreign customs agents.

Make Friends With a Local.

One of the best ways to find interesting subjects is to make friends with a local. It doesn’t matter if you’re 500 miles from home or 5,000 miles from home– locals can help you navigate the roads and respect the culture.  Don’t be afraid to strike up a conversation and see where it takes you.

Have an Amazing Time.

I generally hate tip lists that end with something pithy like, “and most importantly, have fun!” They usually strike me as cop-outs designed to artificially add one more item to the list. Do you really need me to tell you to have fun on your vacation? Of course not! I do mention it, however, because after going back and re-reading this post it occurs to me that a lot of it sounds like planning for the worst while hoping for the best. I suppose that’s not entirely off base, but these are definitely things that you need to consider before striking out on your summer vacation.

Got any travel tips of your own to share with us? That’s what the comments section is for!

Tips for planning, packing and preparing for a landscape travel photography shoot