Zacuto believes that DSLRs and mirrorless cameras still have a big place in video, and have now announced a new line of ACT Recoil Rigs designed specifically for use with them. Claiming they can handle everything from the teeny tiny Sigma fp up to a giant Canon 1DX Mark III. They come ready-to-shoot right out of the box, and come in a variety of different kits for various specific camera models, and there’s a universal option to cover the rest.

The Zacuto ACT Recoil Rigs allow you to quickly adapter to different shooting scenarios, saying that their focus is on balance and configurability. The rigs themselves can transform from shoulder mount to handheld with smooth natural motion in either mode, and Arca Swiss compatibility means you can easily stick them on top of a tripod when needed, too.

Most of the ACT rigs are built from a handful of components. There’s a cage, a baseplate, a “tactical handle” that goes on top, a trigger group, an EVF mount and the EVF itself. When on your shoulder the camera sits right on top, allowing you to more easily balance the load and save your arms. A bracket then brings the EVF up to the front for you to look into while filming. 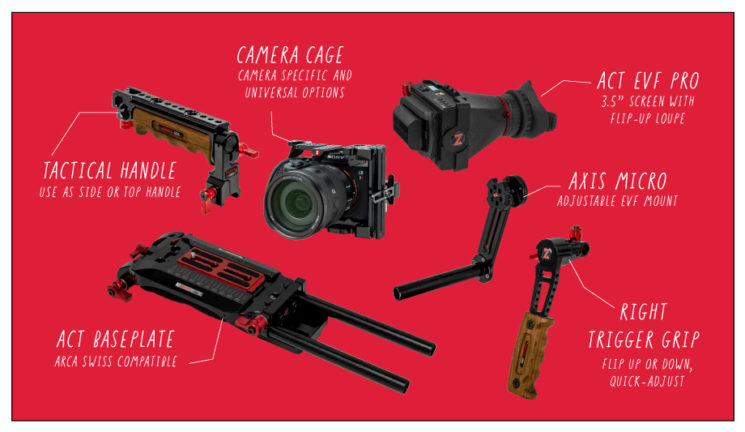 That EVF is a 3.5″ backlit LED with a flip-up eyepiece which contains “anti-fog optics” and a form-fitting eyecup. It accepts an HDMI signal from the camera, but also has HDMI passthrough, so you can pass the signal along to an external recorder or HDMI transmitter. It also has its own power source, taking advantage of Canon LP-E6 batteries, and features some basic assist modes like focus peaking.

Ultimately, the ACT Recoil Rigs are designed for run and gun shooting, where you need to adapt quickly to the situation. So, you’re not going to be sticking huge cameras like the Sony FS7 on there. These are scaled down for the smaller form factors of DSLR and mirrorless cameras. 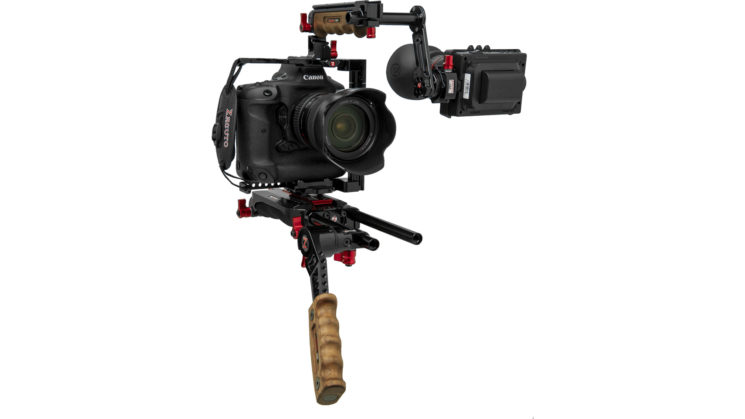 The cost hasn’t scaled down much, though. But it’s Zacuto, so you can expect to pay a premium. The ACT Recoil Rig range starts at $850 for the Basic Recoil Rig. An extra $200 gets you the Cageless Recoil Rig (which is essentially the Basic with an EVF).

Once you add the cage into the mix, you’re looking at $1,450 for the whole setup. Caged rigs are available for a variety of systems including the Blackmagic Pocket 4K/6K, Fujifilm X-T3, Nikon Z6/Z7, Panasonic S1 series, Sony A7R IV and a universal cage.

They’re a bit rich for my blood (and shooting requirements), but if you’re interested in finding o ut more, check out the Zacuto website.