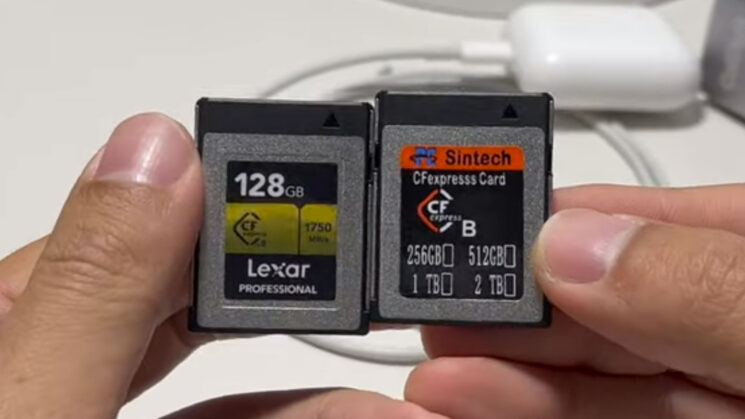 As the drop-in replacement for XQD and the logical successor to CFast 2.0, CFexpress is the hot new format that’s most definitely here to stay. But CFexpress cards are still relatively fresh and new… and expensive. While 256GB SD cards can be picked up for as little as $54, and even UHS-II ones can be found for under $100, 256GB CFexpress cards typically start at around $200.

But there is another option, as detailed by Joseph Nuzzo over on Photofocus. You can also use an M.2 NVMe SSD inside Sintech CFexpress Type-B M.2 NVMe 2230 SSD adapter. NVMe SSDs are significantly less expensive than CFexpress cards, allowing for larger capacities for less money while still being able to get the speed capabilities for which you need a CFexpress card in the first place.

A video from another user on YouTube who goes by the name “National Geargraphic” details the installation process, although you’ll probably want to turn on the automatic translation subtitles unless you understand Korean.

How it works is fairly simple in theory. CFexpress uses PCIe, but with a different connector to that found on M.2 NVMe SSDs. They’re essentially the same thing though, using the same communication protocols and offering similar speeds. In fact, in Joseph’s tests, his homebrew DIY solution even outperformed the ProGrade CFexpress cards in both read speeds (by a little bit) and write speeds (by a lot!) on every test in CrystalDiskMark.

But, this method needs to come with a warning. M.2 SSD to CFexpress adapters are not without their caveats. It’s possible that the NVMe SSD you choose could exceed the power supply capabilities of your camera. CFexpress cards operate on 3.3v and typically operate at up to about 1.5 Amps of current up to a maximum of 2.5 Amps. Some NVMe SSDs may require more than this which will potentially cause issues. At best, it simply won’t work. At worst, it could pull too much current and fry something in your camera.

So, you’ll want to be careful which SSD you pick up. Joseph used the OEM Samsung 256GB M.2 PCI-e NVMe 2230 form factor SSD, which states that it only draws 1.4 Amps on its label. And at only $40 for 256GB, that’s tiny compared to the cost of a 256GB CFexpress card. Even when you factor in the cost of the CFexpress adapter at a further $47, you’re still at less than half the price of 256GB CFexpress cards. 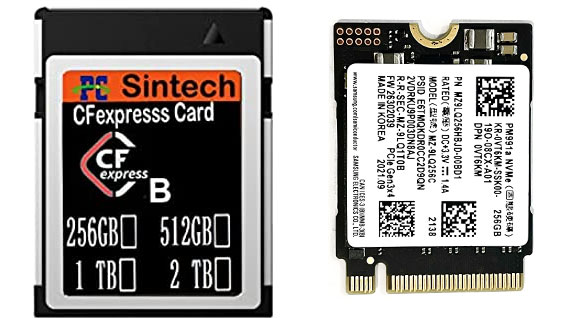 NVMe SSDs also get fairly warm, so you’ll want to embed it in there with some thermal compound to help ensure that it can dissipate the heat. If you don’t, then it might just trigger the overheating warnings you’re always working so hard to try and avoid. There are also potential file system and camera compatibility issues that you may need to try and overcome, too.

It’s a great idea if you want to try saving a little money and it means you should be able to get some pretty big capacities at relatively inexpensive prices. Micron, for example, recently released the world’s first 2TB M.2 2230 form factor NVMe SSD. Whether or not they’ll fall within the power requirements of CFexpress is something you’ll have to research for yourself if that’s a route you wish to pursue, but there are many other options out there for lower capacities.

Head on over to Photofocus to read Jacob’s complete instructions and you can find out more about the Sintech CFexpress Type-B M.2 NVMe 2230 SSD adapter on the Sintech website.

It took 20 hours to cut this SMC Takumar 50mm f/1.4 lens in half and it’s a thing of sheer beauty