In recent years, new pen tablet brands have appeared, some have presented interesting products, but the vast majority of them have tried to gain space in the mora affordable pen tablets, or at least cheaper than the brand considered as the reference, Wacom. As far as I can remember, no new brand was really capable of beating Wacom. But that has changed.

Now, Xencelabs has arrived, which although it is a new company, has a team that already has many years of experience in the development of Pen Tablets, and they are aiming to the premium market. Xencelabs has just launched the Pen Tablet Medium, which can be purchased with or without the Quick Keys Remote. the version with the Quick Keys Remote is the Pen Tablet Medium Bundle, this is the one I have to test.

Before starting with the review, I would like to make it clear that this review is not sponsored or commissioned by Xencelabs. Yes, they sent me the product but without any condition. The only thing they ask was for me to do a review as honestly as possible. They didn’t ask to see the review before I published it. 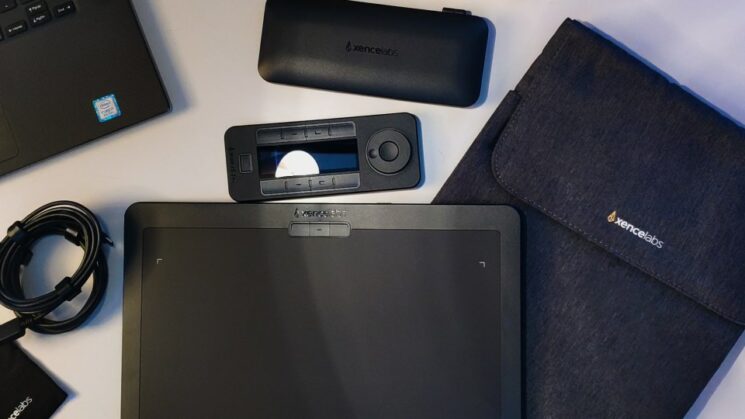 The first thing that caught my attention was the care in the packaging. The box shows great care in the presentation and build quality at a level expected for premium equipment.

In the box, we have the Pen Tablet at the top. Under the Pen Tablet, we get a very useful and well-built carry bag. Then we have three compartments with a small box for two USB cables and a design glove, the Quick Keys Remote and the rigid Pen Case containing two pens, the wireless adapter, a USB-A to USB-C adapter and 10 replacement tips. 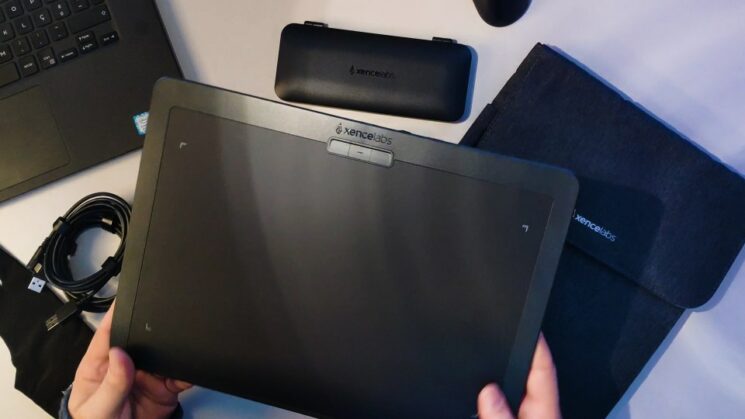 The Pen Tablet has a generous size, 320.5 x 232.85 x 8 mm and the active area is 262.4 x 147.4 mm. The underside of the Pen Tablet is very rigid and made of a metal alloy. It has six non-slip bases that make the tablet stay in place while we use it.  Flipping back around, the lower area has a slight curvature, to better support the wrist. This allows me to work comfortably for hours.

At the top we have three buttons, which can be configured to our liking and for each software we use, we can set the buttons to keyboard shortcuts, mouse button functions, tablet controls, pressure adjustment among others or we can even configure to open any application, we have many options.

The active area of the Pen Tablet is delineated by four LEDs, which can have eight different colors. This can be very useful when we have several configurations for various software. We can define a color for each software, so we can quickly see if we are in the right configuration. For example, I defined the color blue for the settings for Photoshop and Purple for CaptureOne. I chose the colors based on the colors that each software has in its icon.

One of the most important things for those who use a Pen Tablet is the texture of the active zone. I’ve had tablets in the past where the pen slipped too much, removing some of the control, and I had others where the surface was so rough that I found myself forced to glue a PVC film over it. With the Xencelabs Pen Tablet Medium, I finally found a surface with the perfect texture. I can have a level of control and precision that I never found on other Pen Tablets, from other brands.

On the back of the Pen Table, there is a Kensington Nano port, for when we need to secure the Pen Tablet and the USB port to charge the battery or to work with a cable connection instead of using the wireless connection.

The charge level can be seen by the light next to the USB port, green indicates full charge, flashing green means that it is charging, orange indicates that the battery is low, in the software we can see the percentage of charge. 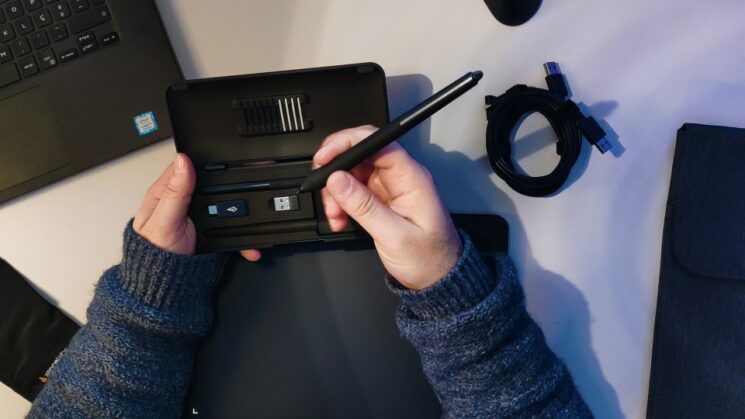 Unlike other brands, the Xencelabs Pen Tablet Medium comes with not one, but two pens; a three-button thicker pen, and a thinner one. The three-button pen weighs about 17g, while the thin one weighs only 12g, the thin pen has only two buttons, but both have the rubber function at the opposite end of the Pen nozzle.

In terms of sensitivity, the two pens are the same, achieving 8192 pressure levels. This is excellent for illustrators and more than enough for photo editing. In addition to the pressure levels, the pens also have the ability to work up to 60º tilt.

With the pens, we get 10 extra replacement tips, six of which are plastic, the same as the ones that already come in the pens, and four are made of felt, in total we get 12 tips. In the box, we also get the tip removal ring.

In wireless Pen Tablets, the question is always whether the wireless connection works without problems. In the case of the Xencelabs Pen Tablet it works perfectly, I cannot feel any difference in using it with the cable or wireless. I’ve had other wireless Pen Tablets in the past where I felt some delay and ended up just using them with the USB cable.

The battery, both from the Pen Tablet and from the Quick Keys Remote, can be charged using the USB-A / USB-C cable, connected to the computer or with a USB charge. Xencelabs announces a duration of 16 hours of operation for the Pen Tablet when fully charged, and about 52 hours for the Quick Keys

Remote, I think they last longer than advertised, in the software we can control the intensity of all lights, the ones that limit the active zone of the Pen Tablet, and the Quick Keys Remote screen and wheel lights, and we can also, in the software, set the sleep mode, which helps save battery.

I never let any of the batteries reach 0%, but I charged the Pen Tablet on the computer’s USB port, from 17% of charge to 100% in about an hour and a half, and the Quick Keys Remote battery from 43% of charge to 100% in less than 30 minutes, although the charging time is not a problem because if the battery reaches 0% we can just plug in the cable and continue working while charging. 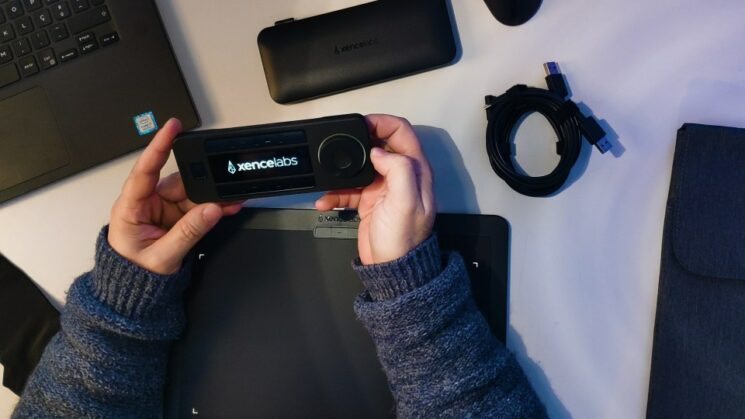 Until now I used a lot of keyboard shortcuts, so using a wireless Pen Tablet has never been a big advantage to me because working on a laptop, I had to have the computer and the Pen Tablet close to me, to be able to use the keys on the laptop, but now everything has changed with the Quick Keys Remote, now I can have the laptop far from me because I don’t need the keyboard as I used to.

Another great advantage of the Quick Keys Remote is not needing to have buttons on one side of the Pen Tablet, which allows for a larger active area. The side buttons, never worked for me because I never know what each button his configured to do, I even used tape to write the commands, next to the buttons, to know what each one did, but if I changed to another software the buttons would have other functions, and I had the same problem… I ended up never using the side buttons.

The Quick Keys Remote has an OLED screen where we can put the name of each key, we have five groups of 8 keys, in a total of 40 shortcuts, which can be configured for key combinations, to open other applications, to replace mouse buttons etc., we can change the group on the button located on the opposite side of the wheel.

The wheel can have 8 different colors, just like on the Pen Tablet, and can have four different modes, these modes can also be configured to our liking, I usually use to zoom, another to rotate images or to change the brush size, but It can be configured for any key combination, we can also disable it if we don’t need to use the wheel.

The wheel is very fast and we can set the sensitivity to our taste, in the middle of the wheel there is a button that is used to switch between the four modes, each mode can have one of eight colors.

Key Remote in the position that is most comfortable, it can even be used by left-handed users without any problem.

The Xencelabs Pen Tablet Medium Bundle software is very easy to use, has a simple and well-structured User interface, and is available for Windows, Mac OS and Linux, the version I am using is for Windows.

With the software we can import or export our settings, we can config the Pen Tablet buttons, pens and Quick Keys Remote.

We can also set the standby time for the tablet and the Quick Keys Remote, among many other things.

I had a hard time doing this test, because I was blown away by the Xencelabs Pen Tablet Medium, I realized that I was only able to say good things about it, which made me think that no one would believe I was being honest in this review, but I was very honest in every word, this Pen Tablet is actually very, very good, and I couldn’t find any weaknesses, I only miss having a case for the Quick Keys Remote, it’s not a big problem but I usually take the Pen Tablet out of the studio and it would be nice to have a protective case.

I’m very curious to see a smaller version of this table, which will probably be much more practical for those who have to take the Pen Tablet everywhere.

This is a fantastic Pen Tablet for both illustrators and photographers who need the precision that only a Premium Pen Tablet allows when editing their images.

Wacom launches Cintiq 16, an affordable drawing tablet for aspiring creatives
« Viewers “raging” over camera’s dead pixels in Zack Snyder’s Army of the Dead
Woman gets under fire after publicly calling out on street photographer for taking photos of her »