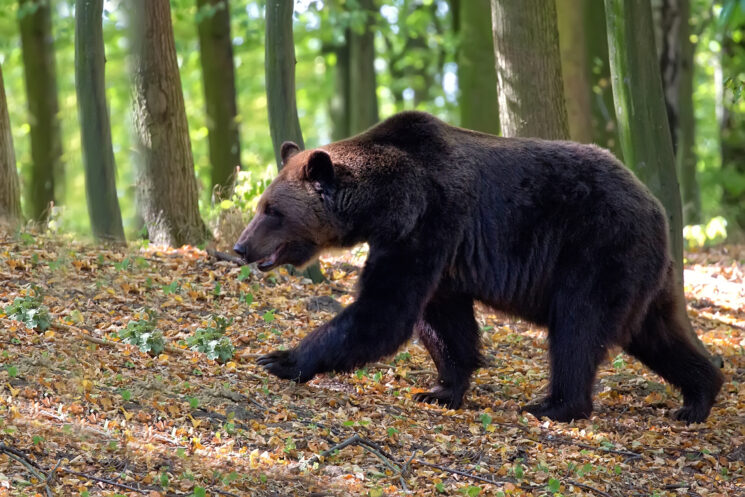 A wildlife photographer had a close encounter with a black bear when he was out photographing in Waskesiu Lake, Saskatchewan, Canada. But his instincts as a photographer overtook his survival instincts and he filmed and photographed the whole encounter, even up to the point when he had to resort to using bear spray.

Curtis Matwishyn says that he was out shooting photos on a trail when the bear started following him. He started out a good 100 metres away, far enough that Curtis was actually having to use his long lens to capture the bear.

Curtis goes on to explain that he was positioned upwind of the bear and he’s sure that the bear smelled him. As the bear follows Curtis down the trial, it gets ever closer. Curtis eventually is forced to put away his camera and start talking to the bear in a gentle yet firm voice, so that the bear knows that he’s human.

Curtis continues to back up slowly for some time, the bear keeping pace, occasionally climbing a tree to get a closer look. “Based on its behaviour it looks like this bear has been fed by humans before and now associates them with a food reward,” says Curtis.

“After about 5 minutes of the bear following but never directly charging me I decided to discharge my spray and thankfully it worked as designed,” Curtis admits that perhaps he could have fired the pepper spray earlier to ward off the bear, however, he needed to make sure that he was upwind of the bear for it to work properly. Fortunately for everyone, the pepper spray worked, and both Curtis and the black bear lived to tell the tale.

“Hopefully this encounter will help the bear learn to run from humans rather than approach them,” says Curtis, “as continued behaviour like this can lead to the destruction of a bear.”

In a later post, Curtis says that the bear wasn’t exhibiting usual black bear behaviour and that he is convinced that the bear had had access to human food in the past, either intentionally or through eating garbage.

For anyone wondering, black bears can actually come in both black or brown shades, like the one in Curtis’ images. Although typically less dangerous than their Grizzly bear cousins, black bears have been known to attack humans, particularly if they have been habituated to human food or if there is a mother defending her cubs.

Pepper spray has shown time and again to be a more effective deterrent than shooting a gun in most cases. The Oklahoma Department for Wildlife Conservation would like to remind you that if you are out and about in bear country then remember that bear spray is not used like mosquito spray!

Photographer films ultra close up of alligator’s mouth, by accident