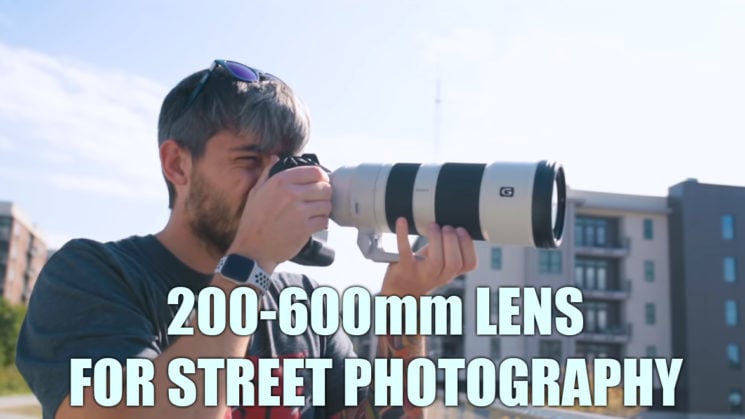 When you think of street photography, a super-telephoto lens probably isn’t the first thing that comes to mind. But Evan Ranft thought: why not? He teamed up with Chris House to test out a Sony FE 200-600mm f/5.6-6.3 G OSS lens in the street. While it still wouldn’t be his first choice for street photography, it does have its perks, and Evan shares his impressions and some photos in this interesting video.

If you hit the streets with a 200-600mm lens, you’ll quickly get tired from its weight. It’s heavy and bulky, and definitely not something you’d want to drag around in your hands all day. It’s also not discreet at all, which is quite the opposite of the lens you’d normally want to use for street photography. But hey, on the other hand – your subject likely won’t even see you because you’ll need to stand so far away from them, so… I guess the lack of discretion isn’t such a big deal.

On the plus side, a lens like this gives you a whole lot of background compression. It looks cool, and it’s definitely unusual to see it in street photos, which are often shot by 50mm, 35mm, 28mm or even wider lenses. This compression can give an interesting look to your images and make them stand out.

The thing that first crossed my mind when I saw the video was “this is ideal for shy photographers!” I’m pretty awkward when photographing even the people I know, not to mention photographing strangers in the street. So, a lens like this would be ideal for me if I ever wanted to try street photography. I’ve heard many people argue that it’s not “real” street photography. But I tend to disagree. And I won’t judge. Just don’t be creepy and we’re cool.

Despite the drawbacks, this lens isn’t completely useless for street photography. It’s not something you’d keep in your bag all the time, that’s for sure. But, if you want to try something new in your photography or if you want to challenge yourself… Then try using a telephoto lens in the street. It could help you get some amazing and unusual photos.