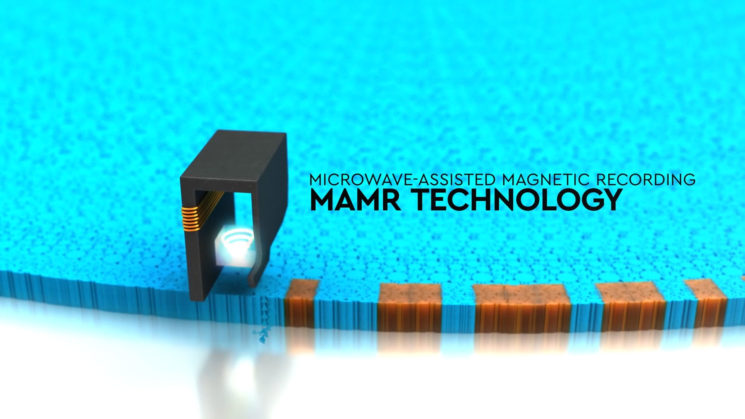 I think I’m going to stop listening to anybody who says that hard drives are dead and SSD is the only future of storage. Don’t get me wrong, I love SSDs. They’re fantastic for when you need really rapid access to data. They’re great as a system drive for your operating system and software.

When it comes to pure storage, though, they still can’t really hold a candle to hard drives for capacity. Well, not unless you want to spend an absolute fortune. Western Digital have just announced a new “breakthrough” technology in hard drive storage. Microwave Assisted Magnetic Recording. They say that it will allow them to create hard drives 40TB and larger.

Essentially, the problem is that in order to fit more data onto a platter, you need smaller heads. Smaller heads means thinner platters. But thinner platters are unstable need a thicker density. These are difficult for the tiny heads to write to, so they heat them with a laser to make it easier.

This tech is called Heat Assisted Magnetic Recording (HAMR). But these lasers heat up to 400-700°C, which also causes instability and reliability issues. It also adds a lot of cost to the unit.

This is where MAMR steps in. It uses a “spin torque oscillator” to excite the molecules. This makes it easier for the tiny heads to write without causing any heat. They’ll also use Helium instead of regular air to reduce internal turbulence. If you want to understand it from a more technical standpoint, you can check out this technical brief on the WD website.

Western Digital say that MAMR technology is “ready for prime time”. But, the first MAMR drives for data centres won’t start appearing until 2019. The claim of 40TB drives, WD say, will happen before 2025, and that they plan to go much larger beyond that.

They haven’t said what capacity the first MAMR drives will be. Given that WD subsidiary HGST (formerly Hitachi) just released 14TB drives, though, we can probably expect them to be beyond that.

Hard drives seem to be a lot like camera sensors in respect to “size”. Every time we take a leap, we’re being told we’re at “the limits of physics”. That sensors can’t get any higher resolution – they said that when we were hitting 12MP. That hard drives can’t get any bigger, that they have a physical limit. I’ve been hearing that one since drives of 20-30GB were considered “big”.

I still think SSDs are a worthwile investment, especially when it comes to reliability and speed. But when you just need a whole boat load of storage, you really can’t beat hard drives for the mass market. Just remember to buy them in pairs so you have backups.