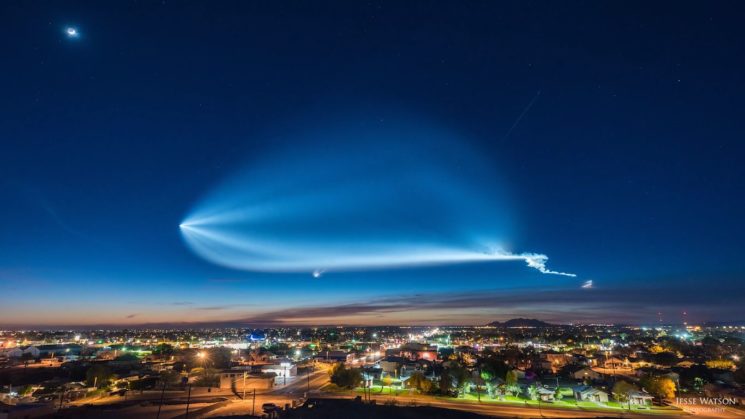 Photographer Jesse Watson has been following the SpaceX launches for quite some time. Fascinated by the footage he has seen, he wanted to make a video of his own, different from what he’s seen in the news. So, before the final SpaceX launch this year, he took his gear and created a timelapse that could easily fit in a science-fiction movie.

As Jesse writes, SpaceX Falcon 9 rocket launch was near his hometown in Yuma, Arizona. He found out about the launch a few days before the event, and he started scouting locations. Finally, he chose a location that overlooked the city. This angle would add some depth to the footage, but it was also the easiest to access with his timelapse gear.

Jesse admits that he’s never shot a rocket launch before, so he didn’t know what exactly to expect. So, he brought four camera and five lenses, as he wanted to cover both the wide angle and the details of the spectacular scene.  He used three cameras for the timelapse, and the fourth one was used for a telephoto video. Here’s the gear Jesse used for the timelapse:

On the day of the launch, Jesse arrived at his chosen location about two hours before the launch time. He prepared everything and started rolling the timelapse about 45 minutes before the rocket was supposed to blast into the sky. When the time came, he couldn’t see anything, so he thought something had happened and it wasn’t launched. Still, after a minute that lasted forever, the Falcon 9 rocket blasted in front of his eyes and his cameras.

Jesse ended up shooting 2452 images, and he was a little off target. But, he cropped into the 6K timelapse sequence and recovered the framing. The final project included 1315 images, edited in Adobe After Effects and Adobe Premiere Pro.

Jesse’s goal was to shoot a video of a FalconX launch like he hasn’t seen before. And judging from what I’ve just watched, he did it, indeed. If you’d like to see more of Jesse’s work, check out his website, Facebook page, and Instagram.