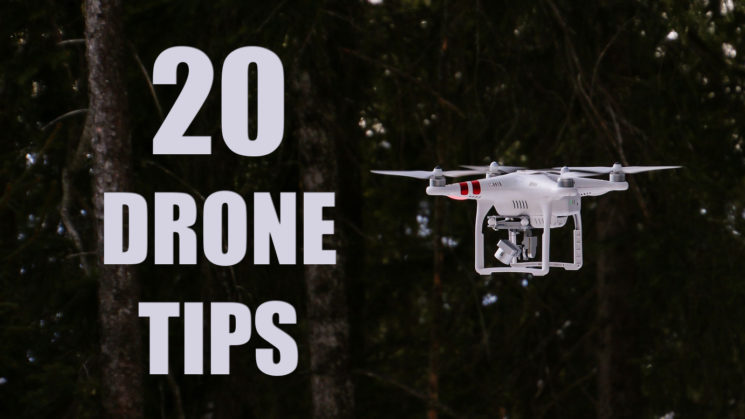 Shooting with a drone gives you an entirely new perspective and opens up plenty of new possibilities. Whether you use it for photography or video, using a drone requires some skill and planning if you want to make the best out of it. Stewart Carroll from Drone Film Guide shares a fantastic set of tips that will help you make your drone footage look more professional. These tips will not only help you get great shots but also teach you how to make the best out of your drone.

Flying backwards instead of forwards has other advantages, too. It’s much easier to navigate the drone if you start from the endpoint and fly backwards. The same goes for flying up instead of flying down. So, shoot the video in reverse, and edit the footage in post.

This tip leans to the previous one. If you want to start from the end point of the video – you must have the end point in mind first. So, it’s important to visualize before you start shooting, check if you can fly smoothly and don’t just fly aimlessly.

Filming a subject can add more interest to your shots and contribute to storytelling. You can shoot people, cars, or any other subject, depending on your story. Just like in the previous tip – don’t just fly without an aim.

Just because you can fly high with your drone, it doesn’t mean you should do it all the time. Sometimes, shooting as low as the head level of your subjects can give a much better result.

6. Use the time between the shots wisely

Battery life precious, so make the most out of it. For example, when you shoot something in front of you and now you want to fly back and shoot behind you, use the time between these two shots. Change the angle of the camera and film all the way back. You may be surprised by these unplanned shots you’ll get.

When you visualize and plan your shots, make sure to keep them short. This will make them more engaging and dynamic, and drone shots that are too long can be boring.

8. Wait for the light

If you rely on the natural light, you already know that it often requires patience. So, if you have the luxury to wait for the sunlight on a cloudy day – Stewarts suggests you wait for it, and make the most out of it.

9. Be able to see your screen 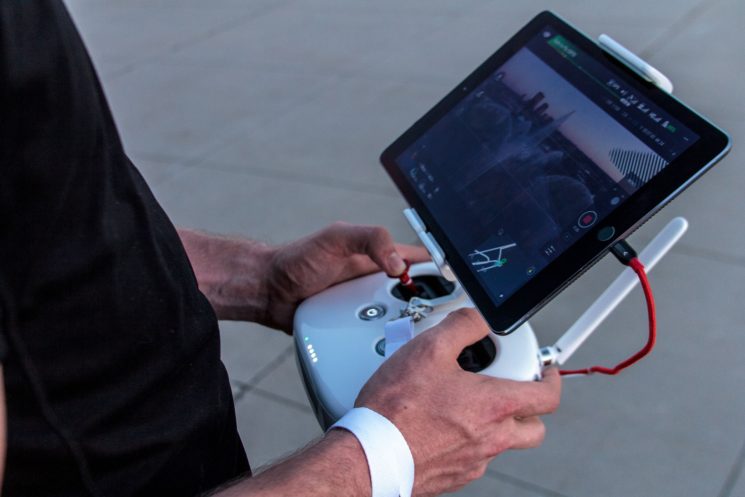 Of course, you should always be able to see your screen – but you should see it really well. If it’s too small, or you have some glare from the sun, you can miss some details in the shot that can ruin the footage, and you won’t notice it until after you’ve already shot everything. So, get yourself a screen that’s large enough, adding a screen protector is also a good idea, and stand in the shadow to avoid the glare from the sun.

Stewart suggests you always take someone to help you fly. By this, he means someone to look around, see what could go wrong and where the drone has the risk of crashing.

11. Use the biggest memory card possible

Choose the biggest you can afford or the biggest one your drone can take – and just leave it record. Stewart suggests doing this because of all those times you think you’ve pressed “record” only to realize you actually missed the perfect shot.

Take a laptop and backup the footage during the shoot. This way, you avoid the risk of losing it if anything happens to the drone.

Be careful not to blow out the highlights, because you can’t recover it in post.

This doesn’t only refer to shooting above large crowds, which you shouldn’t be doing anyway. It means avoiding people who want to chat about your drone while you’re trying to keep in in the air and get the shots without crashing. So, make sure to choose the proper location, and avoid the contact with strangers. After all, if you bring a partner with you, they can handle the chatty strangers for you.

It’s easy to get excited over all the intelligent flight modes and cool moves you can make with your drone. But keep in mind that some of the best storytelling shots are actually pretty simple. So, think of the context and don’t use “fancy” moves just because you can.

Just like with any other kind of shots, be smart about the composition. If you want to remove the unwanted elements from your shot, recompose them so they fit the story you’re trying to tell.

This can be a tricky one because you have to be able to see your drone, but you can’t be seen in the shot. So, stand in the way of the drone, but hide in the shadows or behind the walls. Check out Stewart’s examples.

Take battery warnings seriously, especially when it’s cold. Keep in mind that low temperatures speed up the battery drainage. This goes for the drone battery, but also for the smartphone you’re using as a screen.

19. Treat the weather with respect

Keep in mind that it’s a lot windier in the air than it is on the ground. If the strong wind interferes with your shots, get the drone down to the ground.

Don’t be the first guy to update the firmware. Wait for the reviews and read forums, so you get the sense of the latest update before you get it yourself.

Although there are certainly plenty drone tips to share, Stewart’s list is quite extensive and he gives some good ideas. I’m sure his advice was useful for the beginners, but even for some more experienced drone users.

[20 Drone Tips To Fly Like A Pro Filmmaker! via FStoppers]

« Watch a mesmerizing timelapse of SpaceX Falcon 9 rocket launch
Apple admits what we all thought: old iPhones are being slowed down »