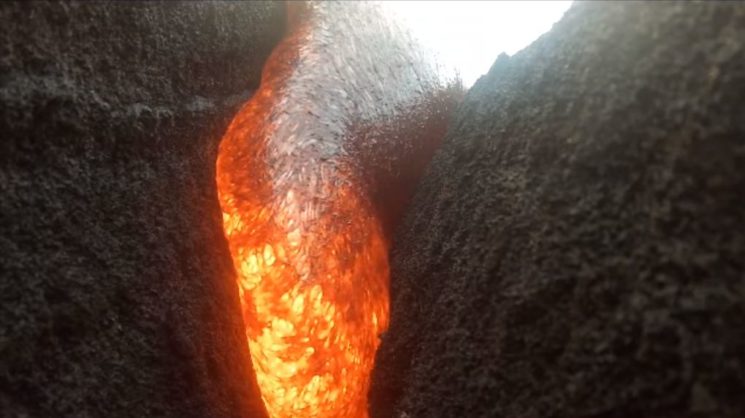 Red, hot, melting lava is wonderful to watch, but of course, extremely dangerous. It has damaged cameras before, and this time, it engulfed a poor little GoPro. However, despite being consumed by lava and even bursting into flames – the camera survived and went on filming.

This epic view of melting lava was captured by Erik Storm, the founder and lead guide of Hawaiian Kilauea Eco Guides. As a matter of fact, he was the guide who took photographer Erez Marom to the lava flow where he melted his drone (but took some stunning shots).

As Erik tells PetaPixel, he placed his GoPro with the housing on inside a crack to film lava flows. While he was telling the story to the visitors, the camera was completely swallowed by lava and burst into flames. He managed to get it out of the fire and thought it was dead. However, when he got home, he was surprised to see that the Wi-Fi light was still blinking. He managed to get the card out of the GoPro, and there was the video of the moment when lava engulfed the camera and made it burn.

I’d say Erik was pretty lucky that the card was untouched and the video was still stored on it. Maybe the GoPro housing is tougher than we thought. But still, to be on the safe side: don’t dip your GoPro into lava. You can try with a lava lamp instead.

[GoPro Gets Melted by Lava and Survives via Gizmodo, PetaPixel]

Watch a GoPro get dipped into a lava lamp