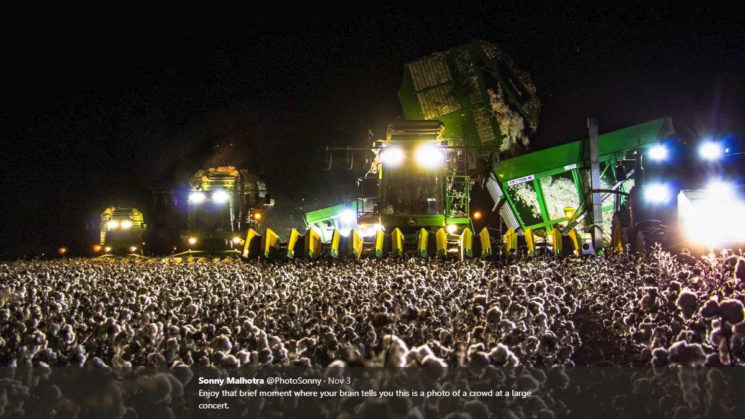 It’s always funny the things we see in images that aren’t really there. Like probably most of you who saw this come up as a preview on social media, I thought this was a crowd at a concert on first glance. But no, it’s not, it’s a field of cotton about to be mowed down by machines at night.

Don’t feel too bad, though. It turns out that Google’s Vision AI also thought it was a rock concert, too.

The image was originally posted a week ago to the Instagram feed of photographer Micah Horn. He’s the one who created it, although it hasn’t seen a massive amount of love over on Instagram.

It was spotted and reposted to Twitter, by PhotoSonny, and it’s been messing with peoples heads every since.

Enjoy that brief moment where your brain tells you this is a photo of a crowd at a large concert. pic.twitter.com/SzegeRTAZt

Even those who are experts at mind manipulation were impressed. Andy Nyman works with the amazing Derren Brown.

And, yes, even Google Cloud Vision API got confused. So, either the machines are stupid, or the people training them are.

Ran the image through Google Cloud Vision API too and got the following results. I guess we have trained the machines wrongly too ! ;-) pic.twitter.com/eAfhOoHRvA

Not everybody was fooled, though. This gentleman’s wife certainly wasn’t.

Just showed this to my wife and she says, “Why are you showing me a picture of a field and combine harvesters?” !!!!

i had to zoom in to see why people were cheering for tractors.

Funny thing is, once you know what it really is, you can’t see that crowd again. No matter how hard you try.

Did you spot what it really was straight away? Or was there a moment where you thought it was a crowd at a concert?

« Upgrading from Sony a7RII to a7RIII: is it worth it?
How to choose the best tripod for your photography needs »