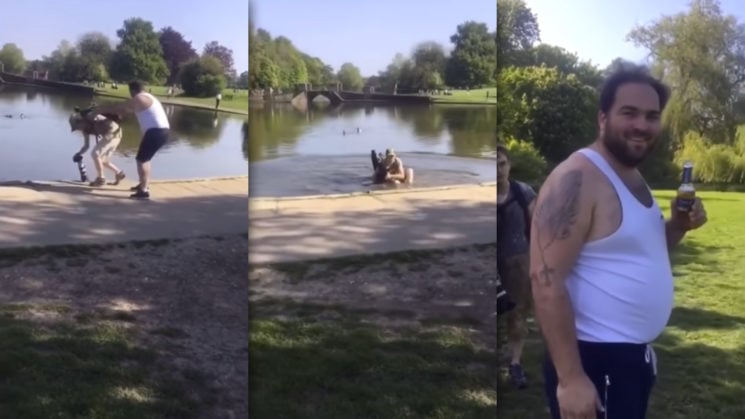 As the world starts to come out of strict lockdown, people are out enjoying themselves again. For some people, enjoyment means finally heading back outside with their cameras. For others, it means harassing random people trying to shoot photos with expensive camera gear and pushing them into lakes.

A video has just surfaced of an event that happened in Verulamium Park in Hertfordshire, England. An unknown man approached a female photographer while she was shooting on the edge of the lake at Verulamium Park and then pushed her right into the water along with her expensive kit, damaging it and causing bruising to her arm.

The St Albans & Harpenden Review reported on the incident, which occurred in May 2018, although the smartphone video of the event appears to have only just been published. Despite the number of people shown in the video that observed the incident, police were calling for people to come forward in an attempt to identify the man.

It is believed this was an unprovoked attack on a woman who was taking wildlife photos in the park that day.

Anyone with information is asked to contact police via the non-emergency number 101, quoting crime reference F1/18/2071.

The video shows the man giving the thumbs up to the person filming the incident before approaching the woman from behind as she gets up from her seated position having finished shooting. He then, without hesitation, pushes her over right into the lake. When confronted, he says he thought she was his sister before turning to laugh at the camera while clutching onto his beer.

It’s unclear whether the man was ever caught and prosecuted for criminal damage, nor whether the photographer’s equipment was repaired or replaced. But as PetaPixel points out, it serves as a good reminder to make sure your gear is insured, because there are a lot of idiots out there in this world who think there’s nothing funnier than to get drunk and abuse other people without a thought to the physical or financial cost to their victims.

Be careful out there. The social distancing guidelines still in place in much of the world, even if you’re allowed out of your home now, should still be followed. So, if you’re out shooting and spot somebody getting too close, be on your guard.

US Marshal Appears To Attack Pedestrian Photographer; Knocks Phone From Hands, Smashes It With Foot