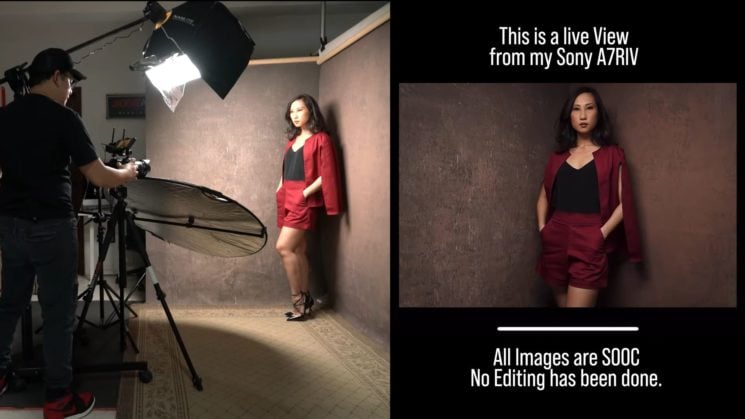 While using one light for portraits is quite a simple approach, there are many ways in which you can use it. A single light lets you create all kinds of different setups, and Jiggie Alejandrino shows you one of them in his video. It’s a simple setup that will give you nice, flattering portrait light, and it will work great in a small studio space. Also, you can create it on a relatively small budget.

Jiggie uses a Nanlite Forza 60 LED Monolight to light the subject. It’s continuous lighting, but you can also use a strobe. To modify the light, he adds a Nanlite Forza 60 lantern softbox and adds the skirts to limit the light spill. This light is then placed directly in front of the model and at around a 45-degree angle above her head.

To bounce some of the light back into the shadow area, Jiggie uses a 5-in-1 reflector supported by a reflector holder. It’s placed underneath the light, tilted towards the model from below. In order to add more light bouncing off of it, Jiggie removes the lower skirt on the modifier, which gives him more light on the model’s body, making more balanced lighting.

That’s pretty much it. You only need an external flash, a modifier, and a reflector. You can get a Yongnuo speedlight for starters, it costs $75. The modifier and the reflector Jiggie uses cost $79 and $48 respectfully, but you can easily DIY both of those, even the stand. So, if you’re on a budget and/or shoot in a small space, I think this setup is worth trying, And if you do, please share your impressions in the comments.