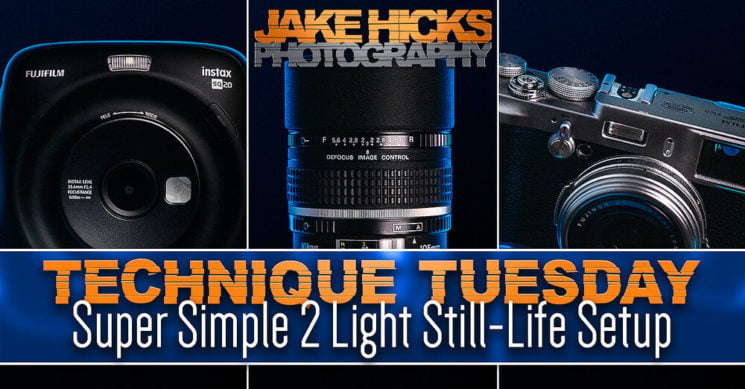 Big-shock I know. A coloured gel lighting technique from me is hardly surprising, but this time I’m scaling things down and today I’ll be sharing a super simple 2 light setup for still-life.

To be clear, I’m a million years away from being an even remotely good still-life photographer, but I thought I’d share this quick little setup as I had a few questions about some shots I shared in a recent article. Plus, if I, a know-nothing portrait and fashion shooter can throw together this still life setup, anyone can do it.

The article in question was discussing studio lighting clamps and brackets and in there I had photographed the aforementioned brackets with a super simple setup that added a splash of colour.

Take a quick look at the shots in question below… 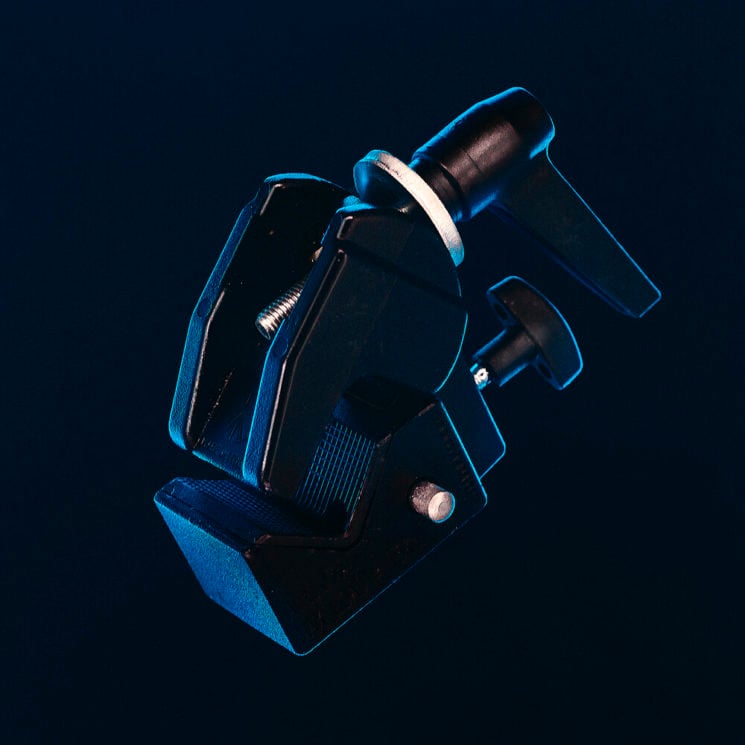 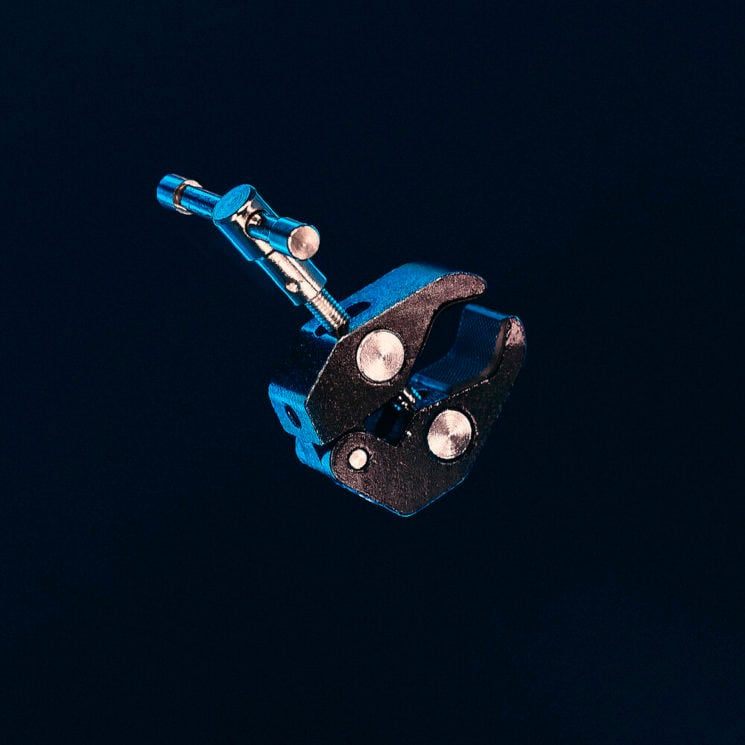 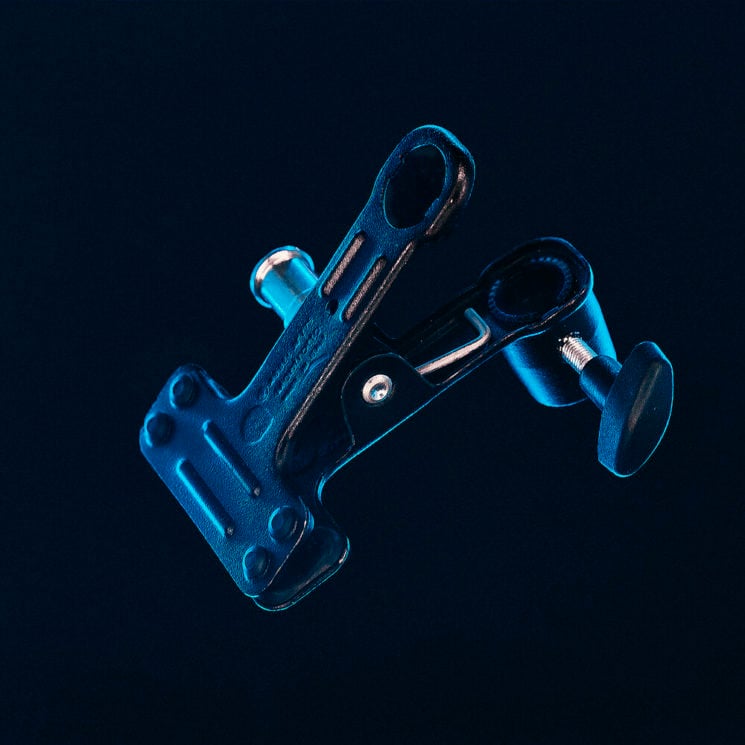 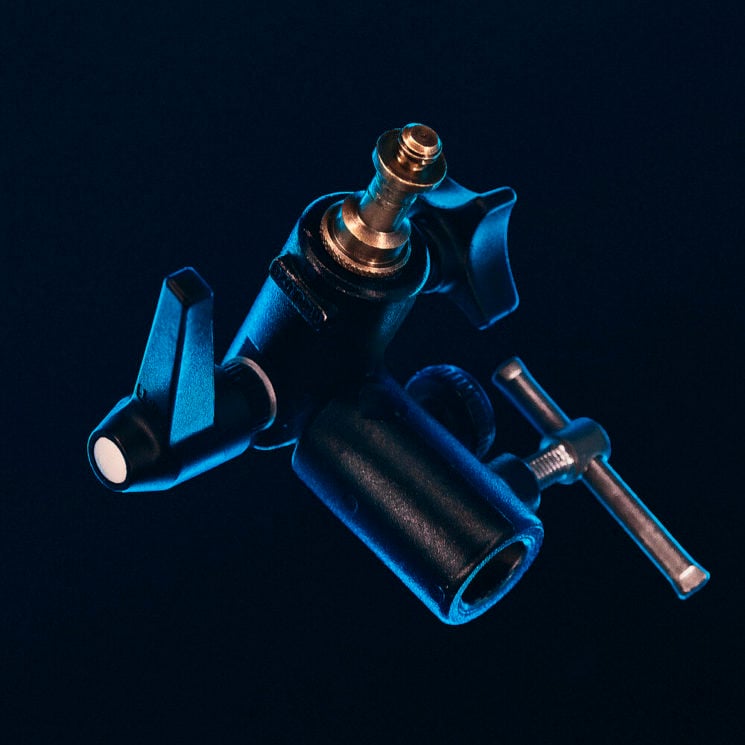 The LED Lighting Setup – (yes, I will cover a strobe version later in the article)

So now that you’ve seen the shots, let me now briefly explain the setup I used to take these. This shoot was actually pretty irregular for me because ordinary 99% of the shots I take are captured with flash. However, these were all captured with specialist LED lights. The reason I say specialist, is because these aren’t some 10 dollar LEDs found on Amazon and the quality of these LED lights is extremely high with an incredibly clean neutral colour. For those that may have used LEDs in the past, you may be familiar with some pretty ugly colour tones from some cheaper so-called ‘white’ light LEDs. This may not be a major issue if you can perfectly white balance them later in post, but if you’re using multiple colours in the same shot like I often do, balancing out the white will also shift the other colours.

The LEDs in question are the Spiffy Gear Spekular Modular LED Lights. Essentially these LEDs consist of 4x 30cm/12” bars that you assemble in a variety of ways and the key feature I wanted to use these ones for, was their ability to be assembled in a square as you can see below.

I actually have two sets of these so I had one square of lights above my items to light them with white light, and then I had one set of square lights beneath the objects with a blue gel to add that colour.

Take a look below at the setup in question. 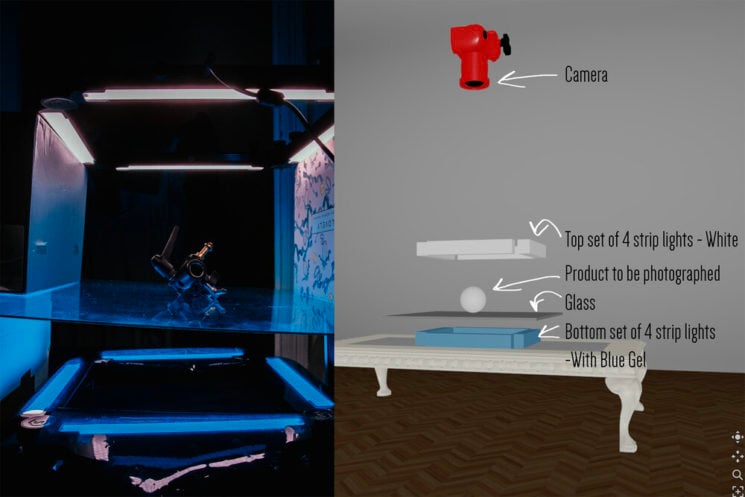 My super quick and dirty still-life setup that has white light above that I can shoot through and blue light below to get the coloured edges. 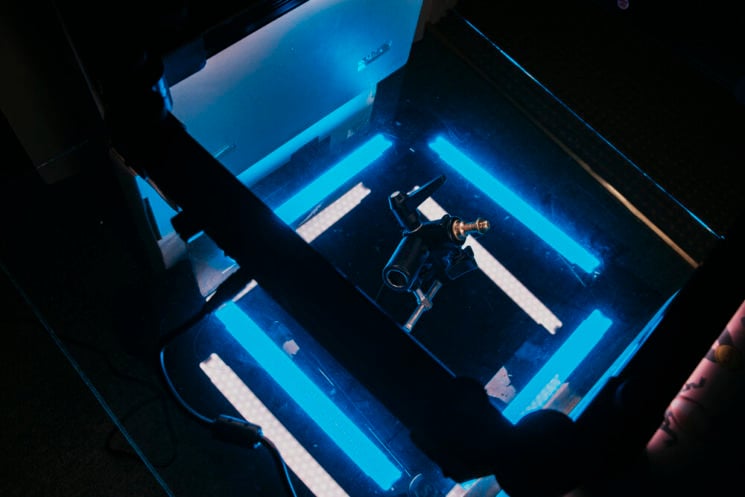 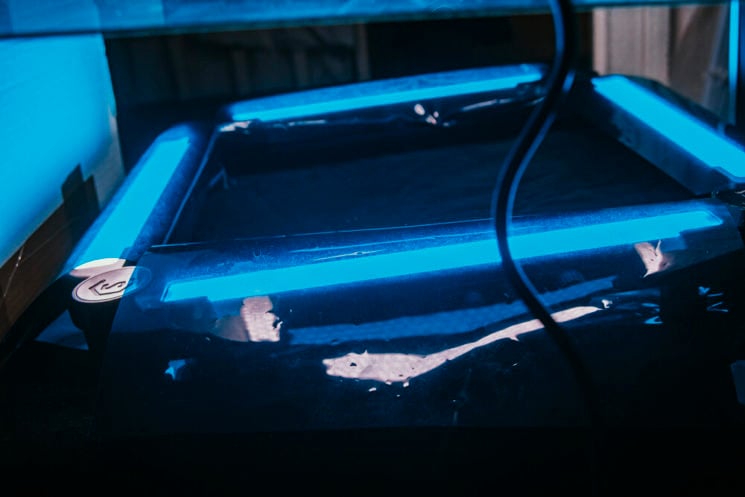 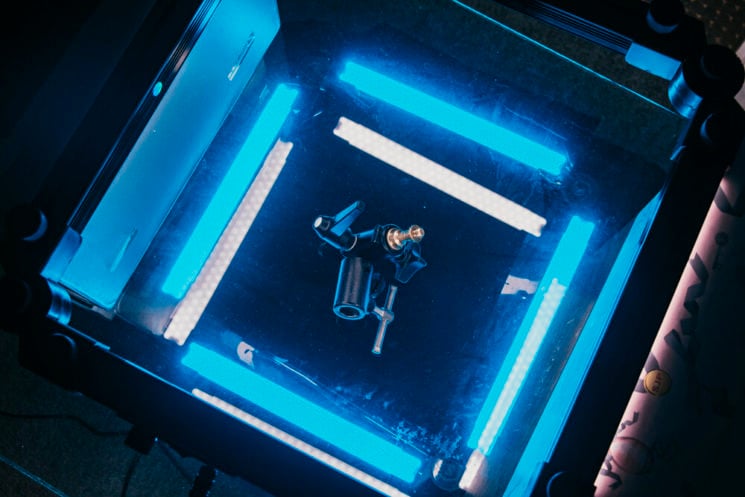 Now as excellent as those LED lights are, I fully appreciate that not everybody will have access to them. Yes, they are extremely convenient, but if you don’t have these strip LED lights, is there a workaround for a very similar look from strobes?

Unsurprisingly, yes there is and I shot a few random images of cameras earlier today to show you the quick and simple strobe alternative.

One of the key features of this setup is the coloured edge light that wraps around our objects. This is incredibly important to have on products that are dark when they are photographed against a dark background as this helps them to stand out. With the LEDs, we had a perfect square with a hole in the middle, but for the strobe version, we’ll have to make a small addition to a basic modifier. The modifier in question was a small 60cmx60cm softbox, this is something that nearly every strobe shooter has and the addition we need to make is to black out the centre so that only the edges of the softbox are visible. 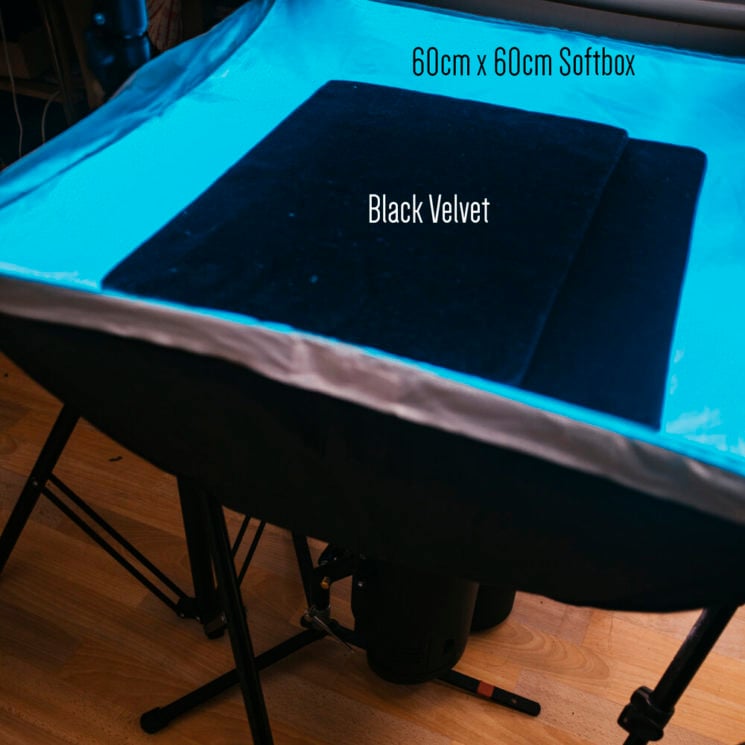 In the example shot I’ve included here, I’m using black velvet to sit in the centre of my softbox. I have a few sheets of card that I’ve wrapped in black velvet to use as flags in the studio, but you can simply fold any black fabric into a square and place it in the middle of your softbox. 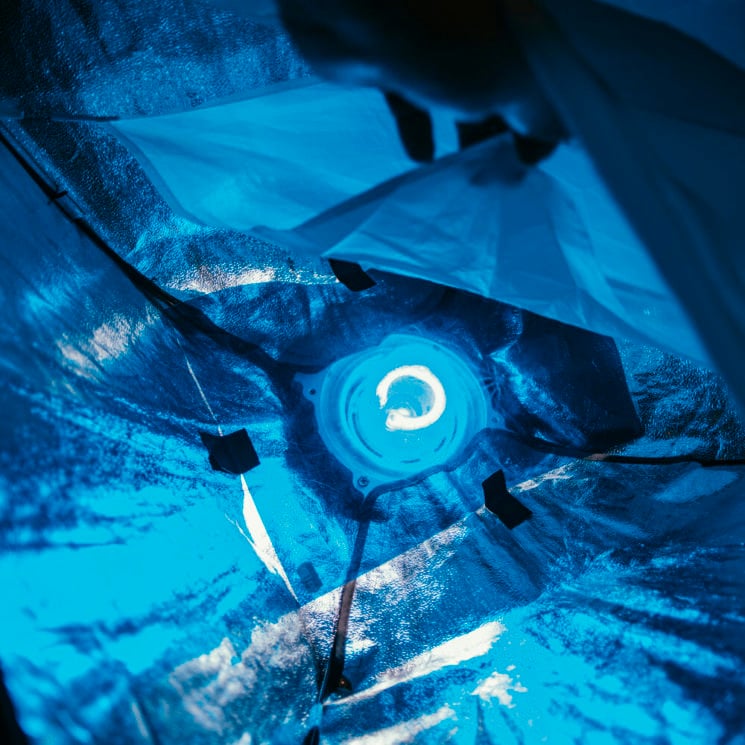 Gelling a softbox is easy and you don’t need a huge gel to cover the front of it. All you have to do is open up the front diffusion cover and place a gel over the flashbulb on the inside. As long as the flash tube is covered by the gel, all light from that strobe will be coloured. I just used a few small strips of tape to keep it in place and that was it.

Failing to do so will result in your gel melting.

The last thing I did with the softbox was to mount it pointing straight up in the air via a floor stand and you can see that in one of the pictures above.

This can be as easy or as hard as you make it, but essentially we just need a transparent surface for our objects to sit on. This surface needs to be suspended above our softbox and the distance you place it from the softbox will change the lighting you get on the objects. For example, if you have the objects very low to the softbox, you will get a far larger rim of light around them. Raise the objects up off of the softbox and the rim of light will get slightly thinner. 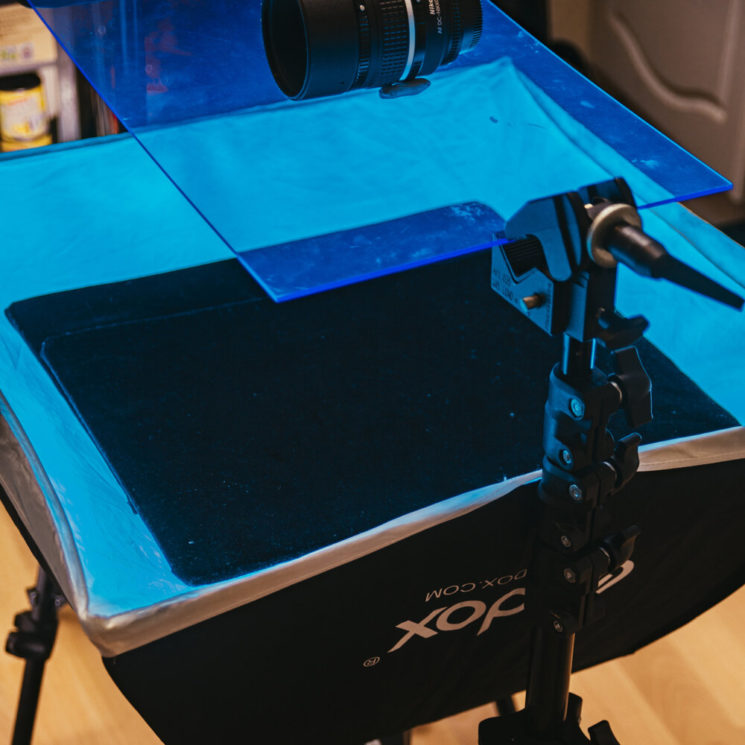 I probably had my transparent surface around a 10-12” (20-30cm) above the softbox but I highly recommend you experiment with this as the type of object you’re photographing will also require you to adjust its height too.

The (first) transparent surface I used was a large sheet of glass from a picture frame… it broke when my object fell over and went through it :( So be careful if you’re using that method. The second transparent surface I could find was a small piece of perspex and that’s what you can see in the images here. I used some light stands and clamps to raise it above the softbox, but you could rest it on anything from chairs to stacks of boxes.

Last but not least is of course the key light. This is the light that will actually illuminate your objects from the front. In the original LED setup that I mentioned above, I was using a ring of LEDs to shoot through, but that’s not necessary here. In fact, I just used a cheap white umbrella, but another softbox or even beauty dish would also work just as well too. 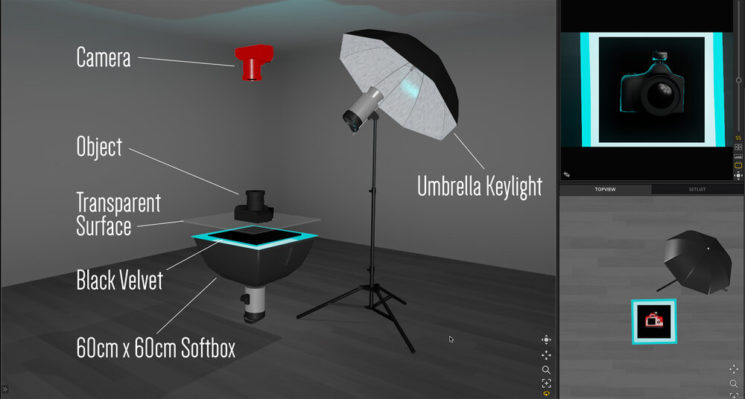 This setup not only requires a very limited kit, but it also requires very limited space too. Plus once it’s setup, you can play around with a few variables to get some different looks too. Change the gel colour, raise the object higher or lower to effect the edge light size and even add reflectors or additional lights to get a better-looking object light.

If you’re interested to see how my test shots for this article turned out, take a look below. 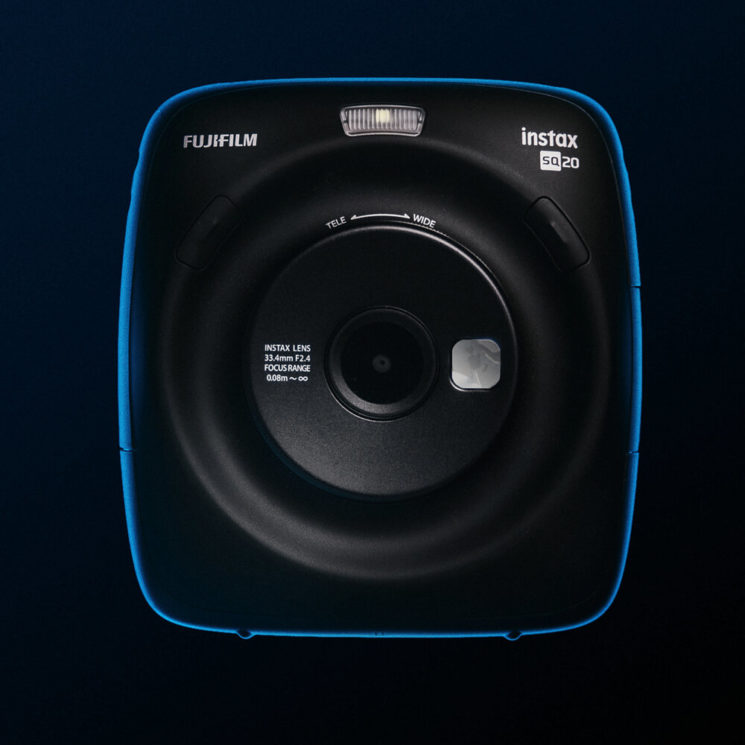 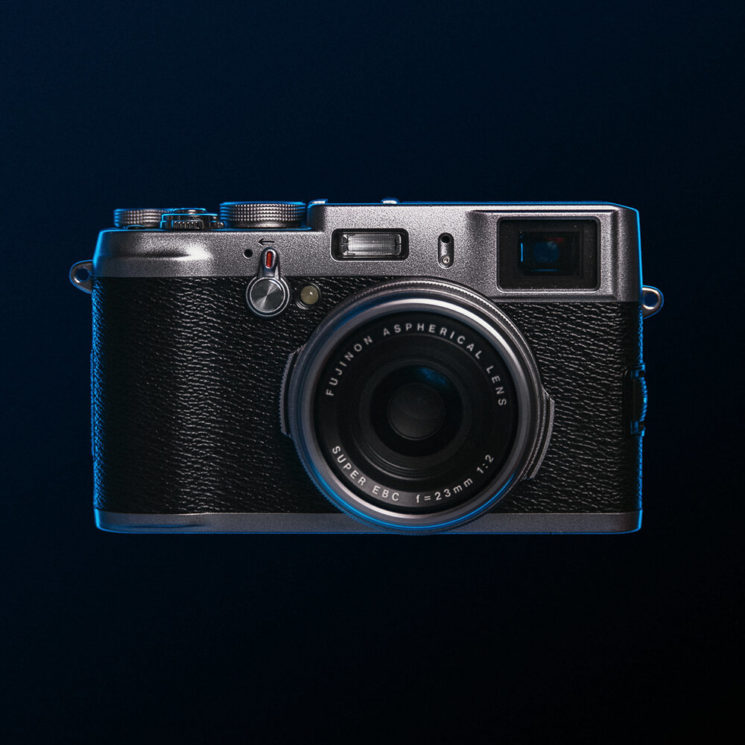 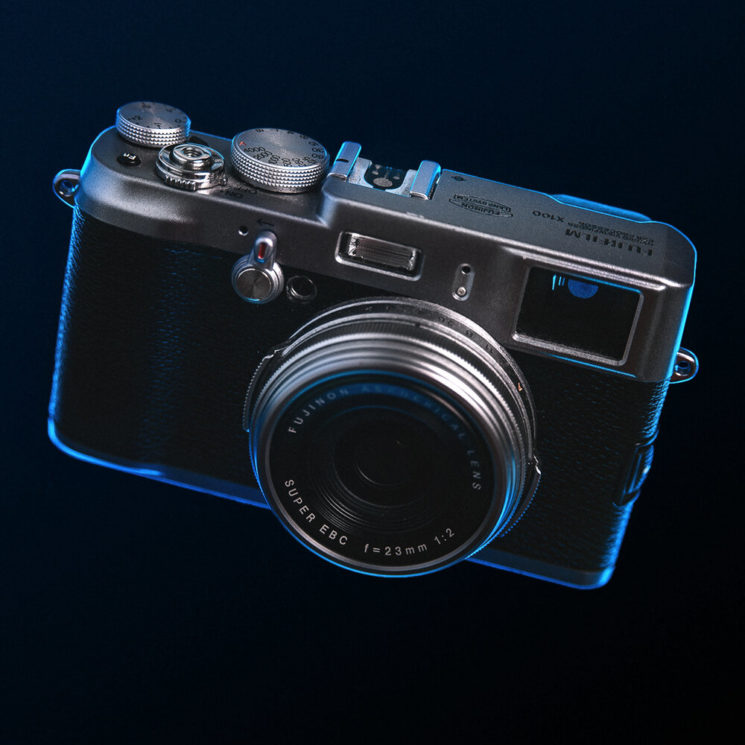 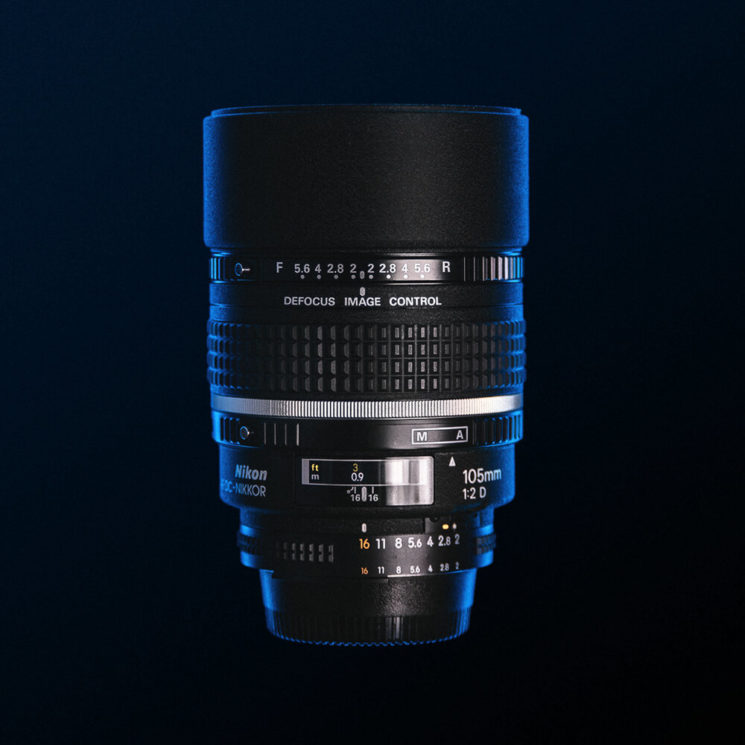 Like I stated at the top, this is actually a super simple setup and it only requires two lights, very basic modifiers and practically no space whatsoever to achieve. So if you’re after a quick and easy way to shoot some products, hopefully, this may well be of use to you.

Lastly, for those that may have been curious as to exactly what that blue edge light was doing on its own, take a look at the shots below to see what the images looked like with just the blue light on. 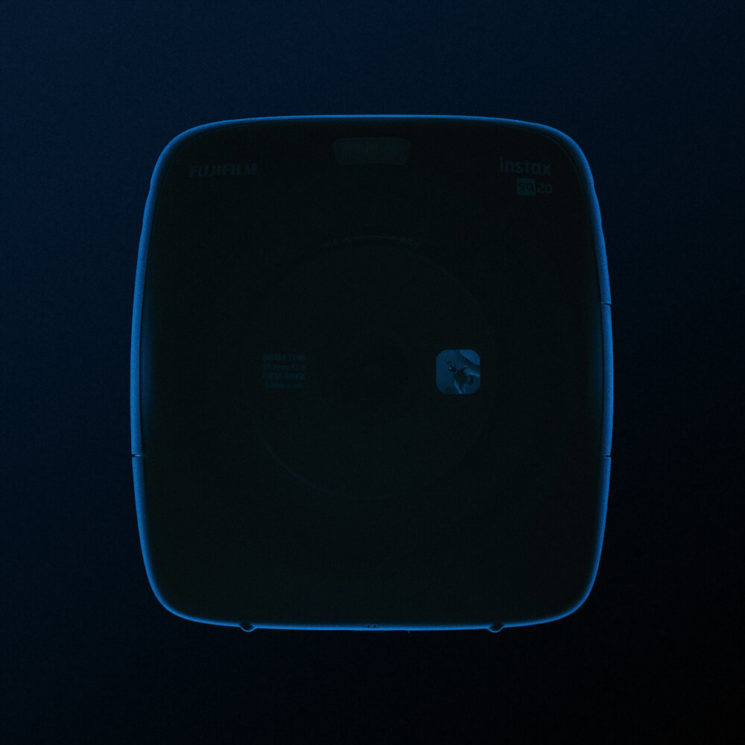 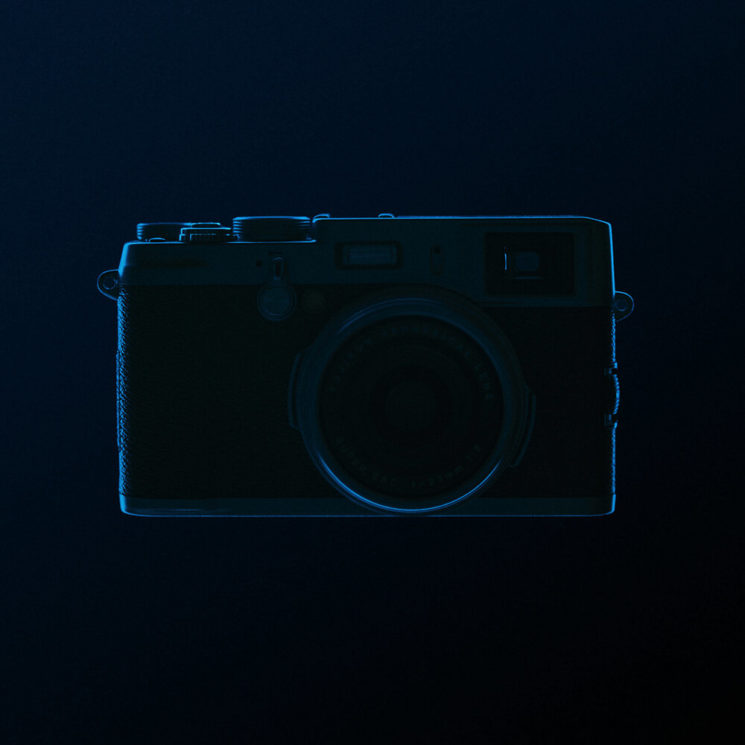 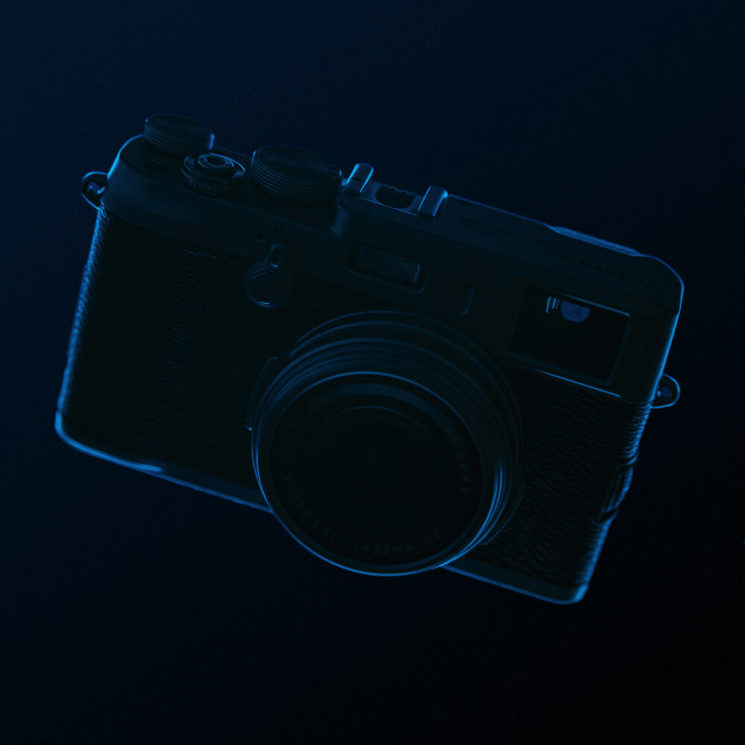 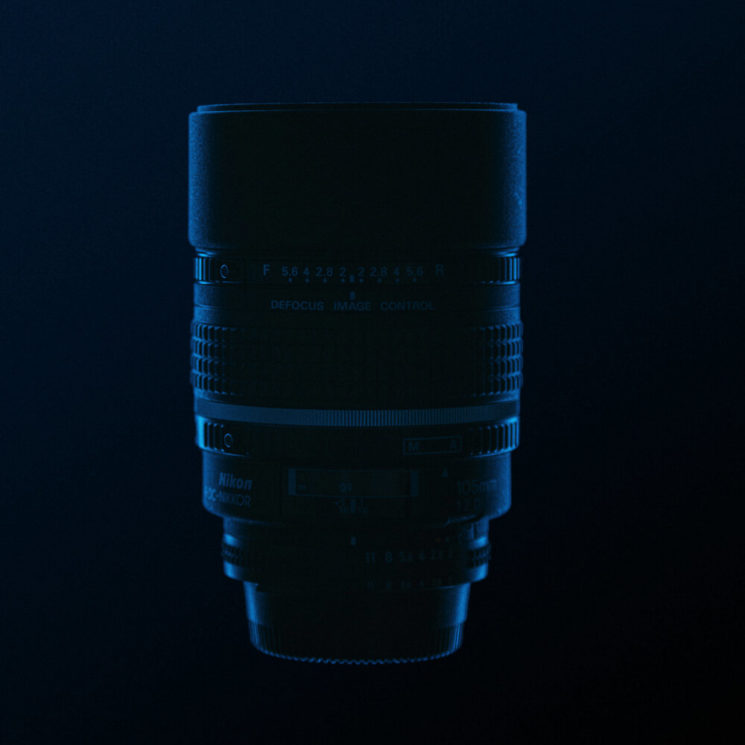 Jake Hicks is an editorial and fashion photographer who specializes in keeping the skill in the camera, not just on the screen. Jake currently has a workshop available on big light in small spaces. For more of his work and tutorials, check out his website. Don’t forget to like his Facebook page and follow him on Instagram, too.

You can also sign up to the Jake Hicks Photography newsletter to receive Jake’s free Top Ten Studio Lighting Tips and Techniques PDF, and be sure to download his brand new, free 50 page studio lighting book. This article was also published here and shared with permission.

Use this simple setup for gorgeous one-light portraits
« These 22 “street photography” pictures are just what you need if you are in lockdown
Watch: What’s it’s like to restore an 85-year old Leica »