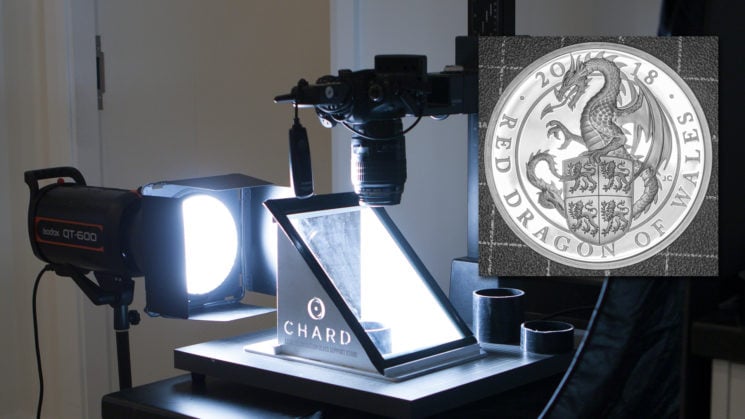 They often say that photography is all just smoke and mirrors. And, in this case, they’re half right. Mirror-like reflections certainly are involved. This is lighting setup that never would’ve occurred to me had I not stumbled across it on a friend’s Facebook post. UK based photographer Dougie Smith typically brings people into his studio, but he also shoots photographs for Chards, a dealer of rare and collectable coins.

Dougie’s been a friend of mine for years, so when I saw him post a couple of setup shots to his Facebook profile, I had to send him a message asking if I could share them here with you guys. He and Chards agreed, so here we are. It’s a fascinating setup called axial lighting, and it overcomes some of the problems you see with typical macro ringflash setups.

The setup itself is quite simple. You shine a light from the side, and a piece of glass or 2-way mirror at 45° reflects it down onto the subject. Then you place the camera directly overhead of the subject, looking through the glass. Finally, there’s a black cloth on the opposite side of the subject to the light to prevent it from reflecting back up into the camera’s lens. 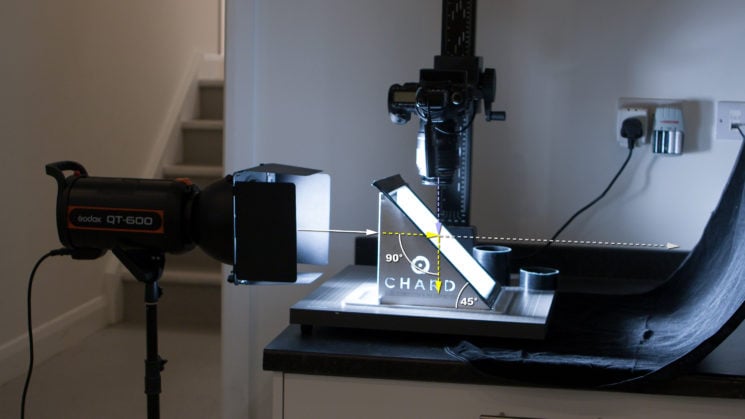 So, in the above image, you can see how it works. The solid white line is the straight white light coming out of the lens. Where it turns into the dashed yellow line, it enters the mirror holder and reflects straight down at 90° to light up whatever’s laying flat on the surface. The dashed grey line is any light that escaped through the glass and carried on in a straight line. This is soaked up by the black cloth. The blue dashed line pointing straight down is the view of the camera’s lens.

It’s a very cool setup that there’s no other way to achieve. It allows you to get complete axial coverage with light appearing to come from the actual lens itself. Impossible to achieve with a ringflash, as you always get that dark hole in the middle where the lens sits. Depending on your subject, you might not see the reflection, but with shiny objects like coins, you most certainly do. 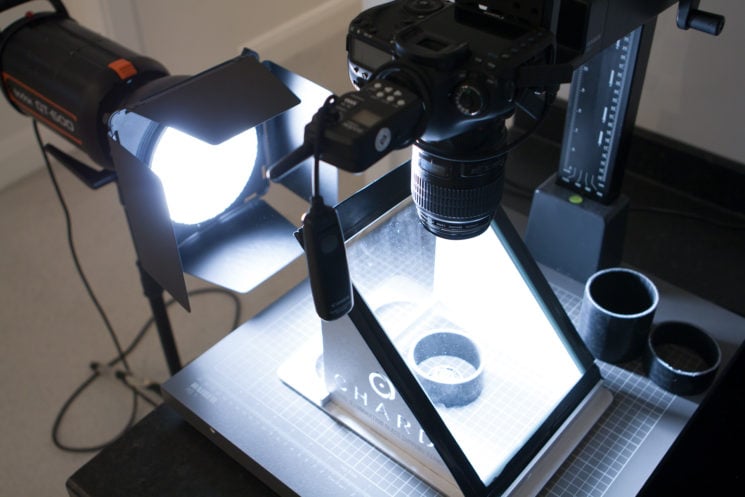 In order to make sure that all the light on the coin is coming from above, the coin is placed inside a small cylinder. This prevents it from being hit by direct light from the side. The results are absolutely spectacular using just this one light in a reflector from the side, flagged off by barn doors. 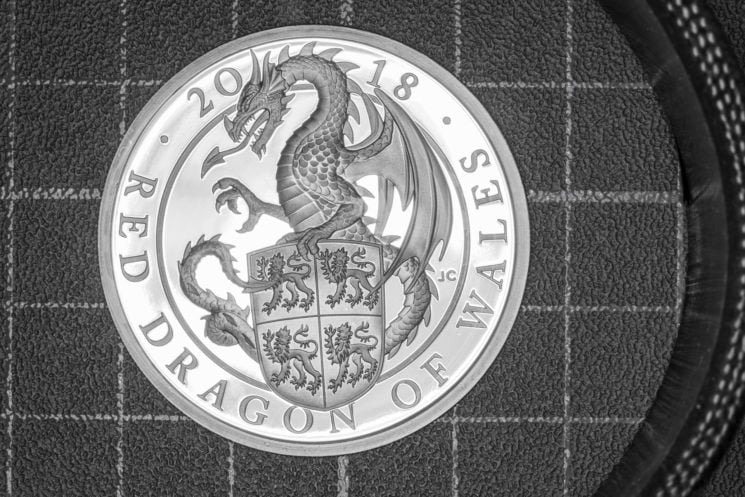 About the process, Doug told me some of the principles of how the system works, as well as technical issues you have to think about for this sort of setup.

Axial lighting is a term used to illuminate the subject through the lens.

The light source comes parallel to the surface the subject  rests on and is pointed directly to a sheet of 3mm glass placed at an angle of 45 degrees. Some of the light is reflected downwards and provides perfect, even, overhead lighting of it.

Some of the light will pass through and it’s important to have something black (or dark) to absorb the light to stop it reflecting back which would then get passed upwards and cause lens flare.

It’s such an obvious solution when it’s explained, that it’s amazing more people don’t do it. As well as coins it could be perfect for bugs or any manner of other macro subjects.

Important here is the Canon 100mm 2.8 macro lens which gives more room to work with – there is room to place the glass over the subject but under the lens. We couldn’t do this with a supermacro lens like the 65mm.

For Nikon shooters, the 105mm f/2.8VR or even 200mm f/4 Micro-Nikkor lenses should work equally as well. They both allow for plenty of working distance between the subject and lens to place the glass.

For actually setting the glass, there are a number of ways you can do it. Here, Dougie uses standard 3mm thick window glass. The edges are taped to aid handling. There are many ways you could support it from custom-made supports, such as Dougie’s done with his laser cutter, to simple cardboard and gaffer tape or even holding it by hand.

Dougie also told us a little more about the light and modifiers he uses.

Different effects can be achieved with different modifiers. Our preferred choice is barn doors with a grid fitted. This keeps the light parallel and shows up more contrast. It also shows metal objects more as they appear to be if we were holding them. Notice how the silver field (background surface of the coin design) shows the reflections and slight dimples of the metal.

Using a softbox gives a wider field of light and gives a more illustrated result. 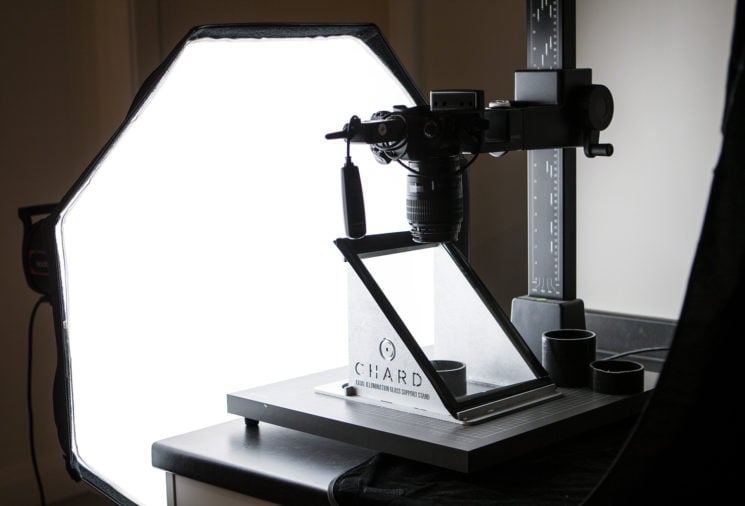 As you can see, the look is very different, but also very pleasing with none of the issues you’d see from using a ringflash. 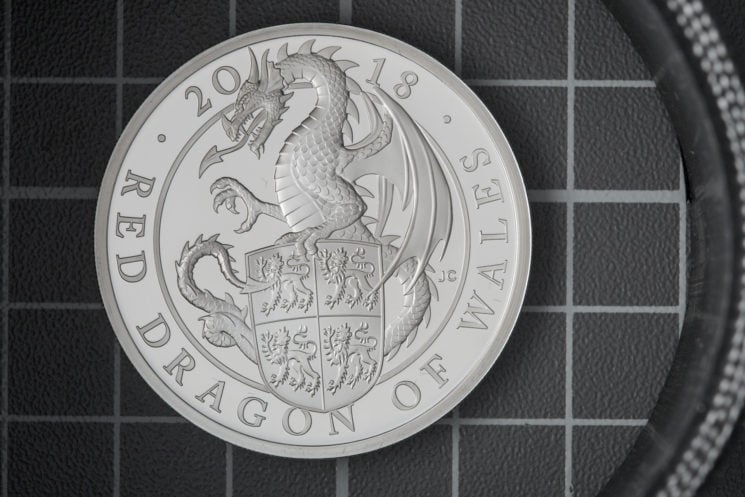 Dougie says the idea for this setup came to him thanks to Gale Spring, Adjunct Associate Professor of Scientific Photography at RMIT University in Melbourne. Gale posted a video of his process, which explains exactly how the principle works, how to implement it, and other issues that come up. Gale also talks about why ringflashes are often not a great alternative.

It’s a really interesting technique, and not one I can see myself using often, but one I definitely plan to have a go with at some point for some macro work with bugs. And it sure does make those coins look shiny!

Many thanks to both Dougie Smith for talking to us about his work, and to Chards for allowing us to share the behind the scenes images.

Can you identify these 10 extreme close up macro subjects?

How to create the “Corona” lighting effect on your subjects

« The Sony 400mm f/2.8 GM OSS Lens has been spotted in the wild at the Olympics
Panasonic LUMIX GX9 launched: 4K photos and videos, 5-axis stabilization and improved image quality »