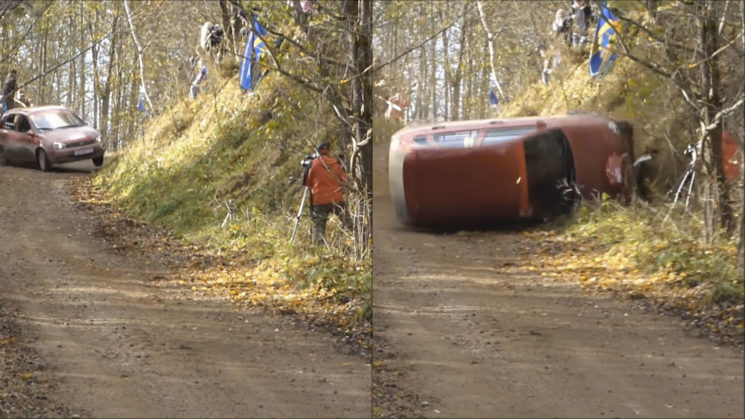 We all take risks for our art of some form or another. For some, that risk is getting into debt to satisfy gear lust. For others, the risks are a little more physical. And those physical risks often seem to present themselves for motor racing photographers and videographers. As this video clip just goes to show.

There’s not really any information to go along with the clip, but it appears to be a rally somewhere in Russia. Then we see Car number 50 hurtle around a corner, all four tyres off the ground, before losing control, barely missing a guy shooting video on the side lines, tumbling several times, finally landing in a ditch.

I have no idea exactly what model or even make of car it is. I’m not a car nut. If you know, let me know in the comments. But after landing, it seems to hit pretty hard, swerves up a bank, and then loses a wheel before tumbling towards the video guy. Fortunately, the cameraman’s quick thinking manages to save him, pulling his camera and tripod out of the way just in time.

The car, though, doesn’t stop until it takes a couple more tumbles, slams through some trees and rolls into a ditch. Later in the video, we see that the occupants of the vehicle managed to make it out just fine and nobody looks badly hurt.

The rear wheel coming off the car, and causing it to continue along the road probably saved the videographer. Had the wheel stayed on, with the direction the car was headed, it probably would’ve had the grip to go straight towards him.

A lucky escape, but I’ll bet the driver, navigator and the camera guy needed a clean change of underwear after this little encounter.