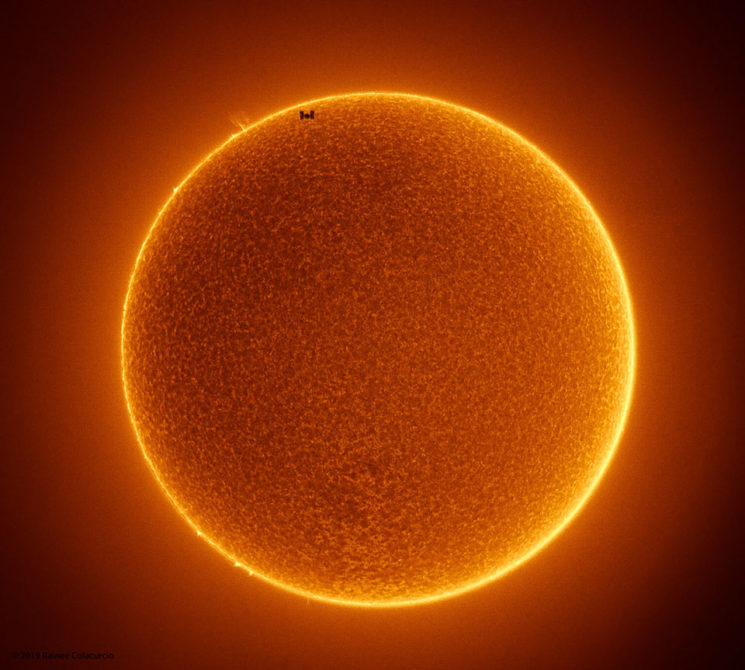 Seattle-based photographer Rainee Colacurcio has recently captured a stunning image of the International Space Station (ISS) caught passing in front of the sun. What’s more, the sun is completely free of spots, which makes this photo totally captivating. I personally couldn’t stop staring at it, and NASA recently selected it for Astronomy Photo of the Day, explaining why it is so special.

Rainee’s photo was featured on APOD (Astronomy Photo of the Day) and it combines two images. One captures the ISS transiting the sun, and the other taken after it shows details of the Sun’s surface. “Transiting the Sun is not very unusual for the ISS, which orbits the Earth about every 90 minutes, but getting one’s timing and equipment just right for a great image is rare,” APOD writes.

But in addition to Rainee’s skill and timing, another thing that makes this photo so special is the fact that the sun misses any real spots. Not counting the “spot” created by the ISS in the frame.

“Sunspots have been rare on the Sun since the dawn of the current Solar Minimum, a period of low solar activity. For reasons not yet fully understood, the number of sunspots occurring during both the previous and current solar minima have been unusually low.”

Rainee has posted another photo of the same scene, but it captures the ISS in another place:

I admit I don’t know much about astronomy. But I know that I love seeing wonderful images of space, and fortunately, I don’t need extensive astronomy knowledge to enjoy them. And if you want to see more gorgeous photos of sun, moon, the ISS and more, make sure to check out more of Rainee’s work on her Instagram and 500px.

Photo capturing the Sun, ISS and Mercury in a single frame