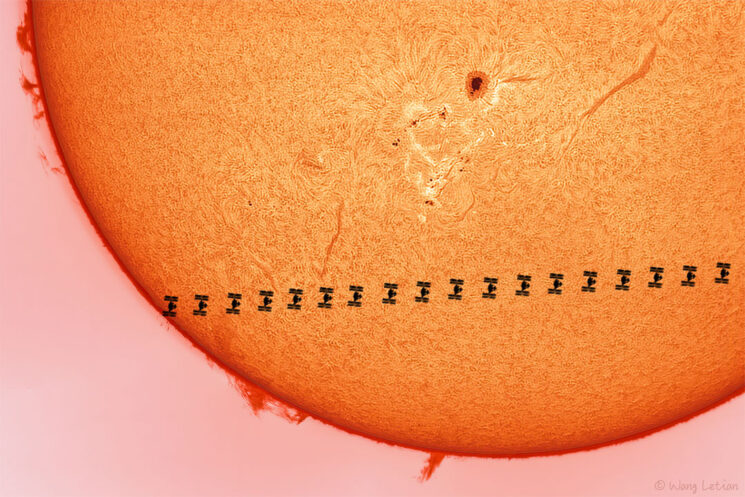 The ISS orbits the Earth every 90 minutes at the speed of 17,500 miles (28,000 kilometers) per hour. On top of that, it’s very rare to see it during the day. So, capturing it in daylight is pretty tricky and requires some serious planning and preparation.

Chinese photographer Wang Letian captured the ISS at the right place and at the right time, and his photo even became NASA’s Astronomy Picture of the Day (APOD) for 11 April. No wonder, as it shows the ISS passing in front of the very active sun, making the viewer’s jaw drop in awe. We chatted with Letian a bit about his image and how he took it, and he kindly shared some backstory and the image itself with DIYP.

APOD’s astronomer explains why a photo like this is so rare and so special. Even though the ISS orbits the earth 90 times in a day, it’s typically visible only at night. You can see it as a bright spot drifting across the sky several times a year from many locations. “The ISS is then visible only just after sunset or just before sunrise because it shines by reflected sunlight,” APOD writes. “Once the ISS enters the Earth’s shadow, it will drop out of sight.”

“The only occasion when the ISS is visible during the day is when it passes right in front of the Sun. Then, it passes so quickly that only cameras taking short exposures can visually freeze the ISS’s silhouette onto the background Sun.”

Well, Letian did exactly that in his photo. It’s actually a series of photos he took with perfect timing. Then he combined the photos shot nearly at the same time, and highlighted the texture and activity of the busy Sun. You can see numerous gaseous prominences around the edge, filaments seen against the Sun’s face, and a dark sunspot. And it all looks so magical!

Since I know capturing the ISS is quite a challenge, I chatted with Letian a bit about his photo and how he did it. He confirmed that it really takes a lot of prep work if you want to do it right. First, he needed to find the right place to shoot. “Although the transit area is narrow and long, for me, because I want to take photos passing near the region of sunspots, I need to choose the shooting location more accurately,” he tells DIYP.

To find his ideal location, Letian usually makes a rough place selection using a map. Then, he visits the location and determines the precise shooting place. He pays attention to several factors when choosing the perfect spot: are there trees around, are there people who will affect the shooting in any way, are there heat sources or other factors causing air instability; is the location easy to reach by car, will it affect the traffic, is it safe, etc.

“After confirming the shooting location, I will set up the shooting equipment and confirm the whole equipment is all right as soon as possible,” Letian tells us. He shares that people often approach him to watch and ask what he’s shooting. He likes chatting with them, explains what he’s doing, and adds that they sometimes get surprised when they hear what he’s photographing.

If you were wondering about his gear, you may find it interesting that Letian isn’t brand-loyal. he uses a Canon 6D with different lenses, a Nikon D810A, and Sony A7RII. As for telescopes, he has a compact Takahashi FS60 telescope, and a solar telescope Lunt 152T to observe solar prominences.

Letian tells DIYP that he enjoys not only the shooting process but also loves processing his images later. He enjoys what he does, and the feelings photos like this one can induce. “The ISS is the largest man-made celestial body. The moment it passes in front of the active sun is very spectacular, which shows both the greatness of the universe and the smallness of mankind,” Letian concludes. And I can’t say anything other than I completely agree!

Wang Letian was born in 1985 and lives in Beijing, China. He was interested in astronomy since he was a child: he read a lot of astronomical books and took part in the astronomy interest group in his primary school. After high school, he got his own camera and began shooting stars. And in college, he got his first telescope. I’d say that the rest is history. He bought an equatorial mount after graduation and then he embarked on the long and exciting journey of astronomical photography. You’ll find more of Wang’s stunning work on his website, and you can connect with him on Facebook.