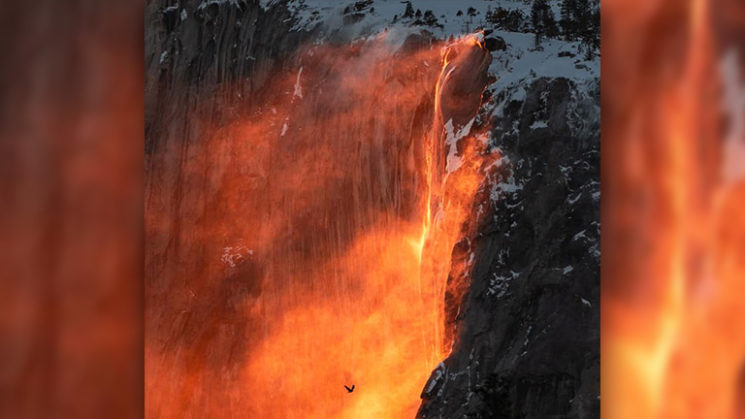 Nature regularly presents us with some rather wonderful and special events. The most common of these are eclipses, which we’ve seen quite a lot of over the last couple of years.

One lesser known spectacular visual treat of nature is the “Firefall” in Yosemite National Park. Each year in February, at Horsetail Fall, if the sun if the weather conditions are right, it turns into a fiery looking flow of water. And this year, photographer and friend of DIYP, Ted Chin was there to capture it.

Originally, the Firefall was a manmade summer event, which began in 1872 and went on for almost 100 years. In this event burning embers were spilled from the top of Glacier Point and into the valley 3,000 feet below. This tradition ended in January 1968 when the National Park Service ordered it be stopped due to the overwhelming number of visitors it attracted, which were destroying the natural area.

That original Firefall was not natural. But this event is, and nature has responded each February with a Firefall of its own, and it looks absolutely spectacular. The setting sun lights up a waterfall that only exists for a short time each year, giving the appearance that it is on fire. Like lava flowing down the mountain. 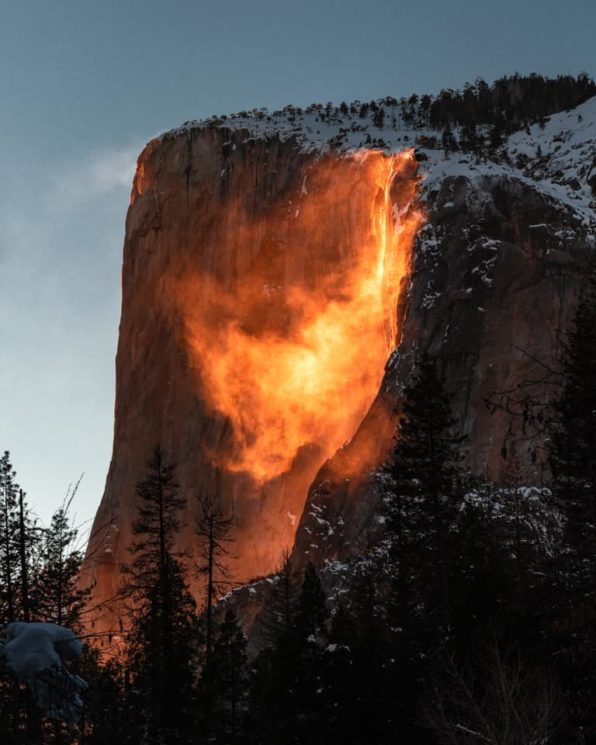 DIYP chatted with Ted to find out more about the photographs and how he created them. Ted told DIYP that he’s been trying to create images of the Firefall at Horsetail Fall for a few years now.

Last year when I came, there was a drought. So, we didn’t see any water there. This year my friend planned ahead, and we were paying a close attention to the weather for the best condition to see it. Originally we were planning to head in the park on Wed (20th) and wait to see the Firefall on Friday. The weather report says that it was supposed to snow heavy on Wed and Thursday, so Friday would be the best day to see it with a clear sky and snow melting. However, on Monday (18th), we heard that people saw one of the best Firefall the day before. Since the weather changes fast in Yosemite and we were afraid to miss it again, we decided to head in to the park on Tuesday to catch the Firefall.

We got lucky and saw the Firefall on the first night. It was an amazing experience to witness the phenomenal scene. To think about that the waterfall happens to be there and the sunlight also light it up once a year to cause this to happen.

It must be an incredible sight to see, and one that’s been on my own list for a few years now. But as Ted explained, unless you get very lucky, even if you see the falls lit up on the first night, it’s still a good idea to keep checking back for a few days.

After we saw it on the first night, all we had to do is wait for the better one to happen on Friday. We regrouped with some of our Friends on Thursday and were planning to relax in the cabin since it was supposed to snow all day.

But for some reason, the sky was clear that day and it was looking really good for the Firefall since it snowed all of the day before. So we all decided to give it a try for the sunset and hope for the best.

With our friends help, we found a second spot to view the Firefall. We parked our car at the swing bridge parking lot and hiked about 30 mins in deep snow to reach to our destination.

Once we got there, I saw many photographers shooting the Firefall.

To photograph the scene presented before him, Ted shot with his Nikon D800 and Tamron 24-70mm f/2.8 lens. Ted shot handheld, as he’d forgotten to bring his tripod, but it turned out that he didn’t need it, happily shooting away with apertures from f/5.6 all the way down to f/16.

And It happens. As the sun set down slowly, the light narrows down to shine on the horsetail fall. Snow was melting and wind was blowing. It was one of the best thing I’ve ever witness in nature. It looks like a dragons breath with fire coming down from the mountain. I shot the whole thing and at the end I just put down my camera so I can actually enjoy this view. 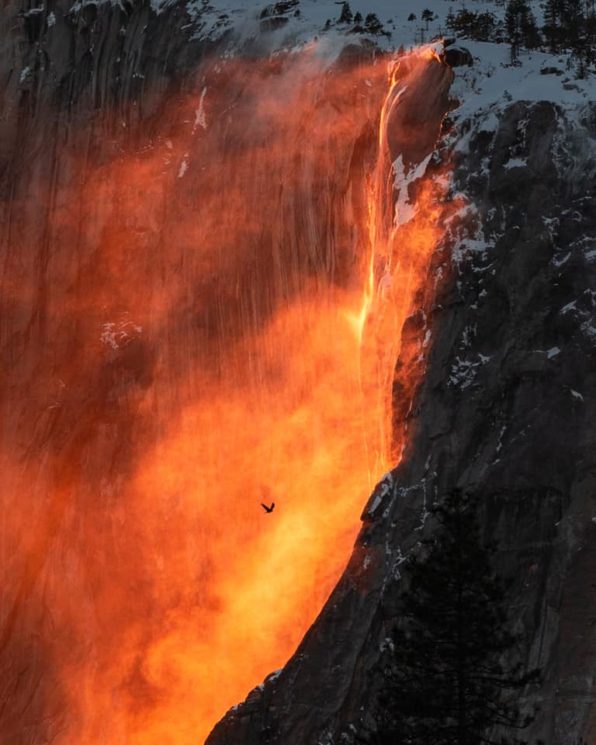 Ted told us that if he went back to see it again, he’d want to find a different location to just enjoy the Firefall and leave the camera at home. Instead, he’d take some friends, whisky and snacks. But he did offer some advice for those who might wish to visit the Horsetail Fall in future Februaries.

I think if I ever do get the opportunity to make the trip out there to see it, I’ll probably do like Ted. Get some photos that first time, and then just go back to watch and enjoy it with my own eyes.

If you want to check out some more of Ted’s work, take a look at this. You can also keep up with his adventures on Instagram.

Have you seen the Firefall in person? What natural eye-candy events are your favourites?

« Wedding photography needs to tell a story – here are five ways to make sure it does
Cautionary tale: how a bad photographer ruined a wedding day »