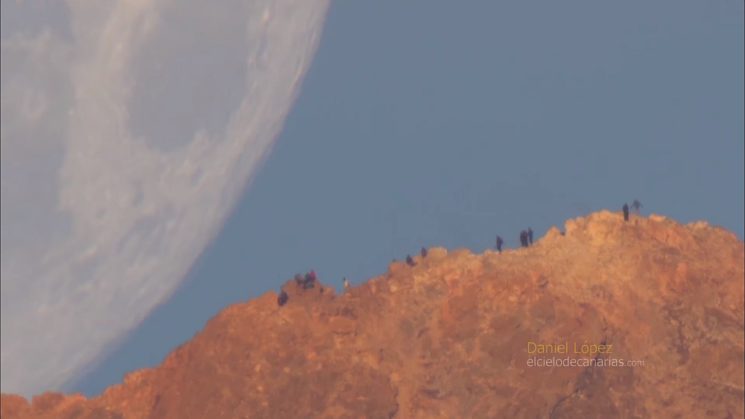 Some photographers use lens compression to make the Moon look huge (this photo by Eric Paré came to my mind). But with a giant telescopic lens, photographer Daniel López made something spectacular. He filmed a short video of the moon setting behind Mount Teide, a volcano in the Canary Islands. And it seems so huge and fast, that you’ll feel like watching a scene from Star Wars.

Daniel filmed the video on 30 May and it was captured from 16 kilometers (10 miles) away. According to this image, he used a Sony a6300, Canon teleconverters, and a telescopic lens. So, despite the huge distance, you can see the details like people’s cameras, canes, and backpacks.

The movement of the moon looks so fast that you might think it’s a timelapse. However, this was really how fast the moon was setting. As the description reads, many people you can see in the video are facing the camera because they were watching the sun rising behind Daniel. But at the same time, he was busy shooting the moon behind them – and it sure looks spectacular.