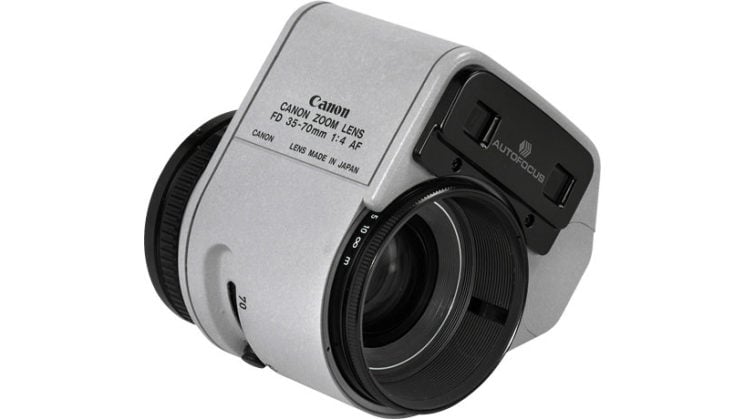 Canon might have the edge in autofocus today, with dual-pixel AF (and quad-pixel rumoured to be on the way… eventually) and possibly even beating out Sony’s Eye AF face detection. They’re even bringing back the Eye Controlled Autofocus System for the EOS R3. But back in the early 80s, autofocus wasn’t something you really heard much about… From any brand.

In fact, the first SLR with autofocus wasn’t released until 1985. But that doesn’t mean autofocus wasn’t available. Canon actually made autofocus lenses for their FD mount cameras. They weren’t cheap and they weren’t particularly common but they did exist, as this video from Kai Wong demonstrates. And it still works on today’s mirrorless cameras.

We take autofocus for granted so much now. We always want it to be faster and more accurate and complain loudly when it isn’t. But in the 80s, autofocus was as revolutionary a technology back then as the shift from film SLRs to DSLRs was 20 years ago or the shift from DSLRs to mirrorless cameras today. Even if it wasn’t absolutely spot on, it was of benefit.

But as Kai’s video shows, the Canon FD 35-70mm f/4 AF lens was pretty accurate. It differs from autofocus systems of today in that the entire autofocus system was embedded into the lens itself and not the camera. There was no communication whatsoever between camera and lens at all – not even for the aperture, which was adjusted using a ring on the lens itself. In fact, this thing will autofocus even when it’s not connected to a camera at all.

And that last point is what allows Kai to shoot it today on his Sony body using a standard FD to E mount adapter. Although, he does joke (but not really) that he probably should’ve used it on the Panasonic S5 so that they’d finally be able to shoot video with a Panasonic camera while having decent autofocus. And it is impressively quick and seemingly accurate.

Of course, they’re 40-year-old optics, so there’s a little chromatic aberration and fringing, but the speed and accuracy of the lens is pretty amazing, even today. Forty years ago it would’ve been pretty mindblowing. The Canon FD 35-70mm f/4 AF lens was released in 1981 for the cost of around $800. In today’s money, that equates out to about $2,500. These days, they seem to hover around on sites like eBay for about $500.

It was the world’s first autofocus zoom lens and used Canon’s Solid State Triangulation (SST) technique. This tech used two fixed mirrors projecting onto a CCD sensor which allowed it to see the same point in space from two slightly different perspectives. If this sounds familiar, it should. It’s essentially the same principle that dual-pixel autofocus uses today.

The method of reading and interpreting the data has changed over the years. Those two slightly different perspectives are much closer to each other now, and there are millions of pairs on each sensor, but still, the triangulation process is fundamentally the same idea. Crazy to think that Canon first implemented the basic principles of “dual pixel autofocus” 40 years ago.

Eye-tracking autofocus on Sony a9 is pretty impressive, here’s how it works

How DSLR autofocus works and why cross type points are important