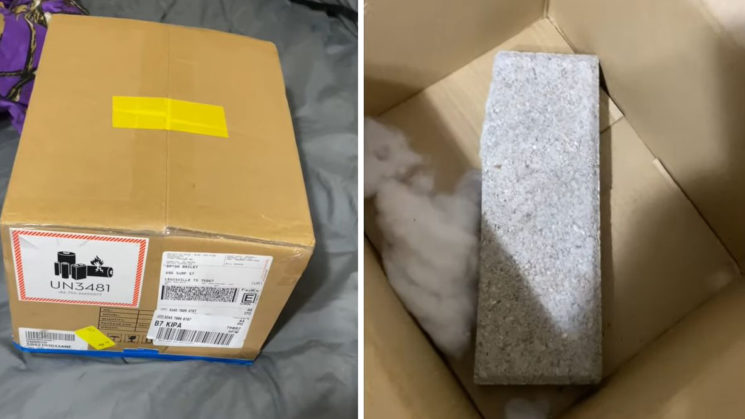 A man recently ordered a DJI FPV drone to be delivered to his home. This wouldn’t be anything unusual if, instead of the drone, he didn’t receive a box with a brick inside.

Bryan Bailey from Lewisville, Texas ordered his $1,299 drone and of course, paid for it. He says that he ordered it straight from DJI, so there was no way he would get scammed by a shady retailer. He even took time off work to be home when his new drone arrives. However, the box seemed a little odd with that blue tape and the wrong weight and size of the object inside. So he grabbed his phone to film the unboxing.

Unfortunately, it turned out that he had bought the most expensive brick and pillow stuffing in the world. Because there was nothing in the box other than that. And since he ordered the drone directly from DJI, Bryan believes that it was someone from FedEx who stole it and replaced it with a brick.

“I have a feeling this guy delivering the package who is shielding his face at my front door #RING camera has something to do with it,” Bryan writes in the video description. “This guy is trying to cover his face or shield it from the camera on my doorbell,” he claims. The doorbell camera footage is also in the video, so you can judge for yourself.

Bryan also claims that someone added the blue tape to the box. It could have been “the Shipping Company ‘Driver’ or ‘Warehouse Workers,’” he writes, adding that it isn’t original packing tape.

I’ve heard of scams like this before, both from my friends and from the news I read and covered. The first one that comes to mind is this one when a guy received a box of bricks and rocks instead of a $6,000 Canon 1DX Mark II. Twice! But this is the first time I’ve heard someone received a brick when ordering directly from the company that makes the gear they ordered.

Of course, there’s still no solid proof of who stole the drone and where on Earth it is. There are only assumptions, and Bryan assumes that it must have been someone from FedEx. He reported the theft to the police so I guess they’ll take it from there, and I hope that Bryan will get his drone or his money.