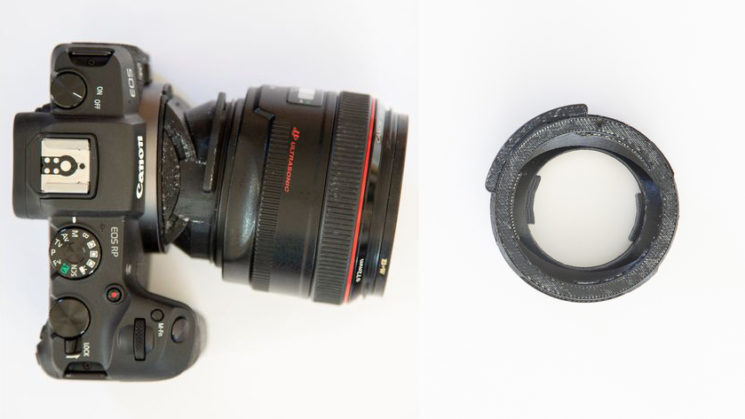 Well, this is pretty awesome. At least, it is if you happen to own a Canon RF mount camera, some EF mount lenses and a 3D printer. While Canon’s busy coming up with their own adapters, and the competition is releasing theirs, the 3D printing community has been happily doing its own thing to satisfy their needs.

Like, Whomstevest, for example, who’s designed this 3D printable EF to RF tilt adapter. Yes, that’s aright, a lens adapter that converts your EF lens to fit on an RF body and it gives tilt capabilities!

Naturally, there’s no electronic connection between the camera and lens when using this adapter, which means you get no aperture control. The creator of the adapter suggests this technique in order to set your aperture – although there’s nothing to stop you throwing an F to EF adapter on this and using Nikon glass that has aperture rings, too.

This isn’t the first tilt adapter Whomstevest has made, having previously designed ones to adapt Mamiya and Hasselblad medium format lenses to the Canon EF mount and Canon EF lenses to the Nikon 1 mount. Now, with those previous adapters, the lenses project a larger image circle than the sensor, which makes things quite easy. Here, full-frame lenses won’t all put out a large enough image circle to be able to project onto a full-frame sensor when tilted. But for a $3 print, what do you have to lose?

Whomstevest also created an awesome web-based Tilt Lens Depth of Field Calculator that will at first make your head hurt, but then allow you to plan your shots easily once you figure out what it’s telling you. He also provides some tips on how to print it in the Thingiverse listing.

To download the STL files and print your own, head on over to Thingiverse and check out Whomstevest’s other designs, too.