The lockdowns that have been in place around the world have pushed at us all a little at times. For some, it’s pushed a little harder than for others. One person whom it’s most definitely pushed is YouTuber and former NASA engineer Mark Rober, who turned his backyard bird watching isolation up to eleven after he noticed the squirrels were stealing all of the food in the feeders he’d bought for the birds that visited his garden.

He set out to create an insane obstacle course that would not only allow the birds to feed in peace but would also offer the squirrels a hard-earned reward for their efforts. Assuming they didn’t get flung off into the air in the process. But one particular part of the course caught my attention. He made a little photo booth that squirrels would stick their heads through to have their photo taken. And they look absolutely adorable. 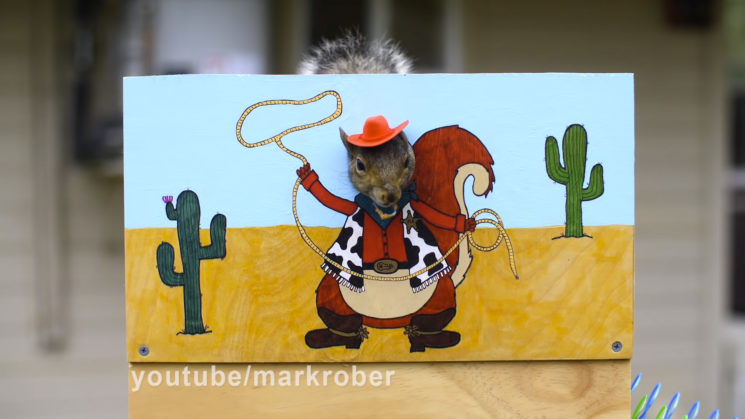 If you haven’t already started watching the video above, it should be made clear that no squirrels appear to have been harmed during the making of this video. In fact, Mark explains some of the safety measures he’s taken to ensure that none of them come to harm and explains the physics behind how the squirrels deal with the various obstacles. Sure, Mark’s a big-time YouTuber now, but he’s also a former NASA engineer who worked on the Curiosity rover at JPL that’s currently wandering around the surface of Mars, so he understands this stuff.

The whole nearly-22-minute video is absolutely hilarious and goes way beyond obsession, but it’s allowed Mark to get some very unique photos and video of the squirrels in his back yard without having to physically interact with them himself. He’s just set up obstacles and let them do their thing to see what happens. It offers some great tips for how to keep squirrels off your bird feeders, too, if you’ve set some up in your back yard to attempt to lure birds to photograph.

The video also demonstrates just how smart squirrels can be and how they break into bird feeders – even the “squirrel-proof” ones. As well as the cameras he set up to record the actual obstacle course as the squirrels ran through it, Mark also set up some cameras streaming 24/7 and they caught some other pretty cool visitors to the yard.

It’s interesting to see all the wildlife that visits our homes when we’re not looking.

And, yeah, the squirrel photo booth is pretty cute, too.

Adorable Photos of Squirrels in a Backyard Studio