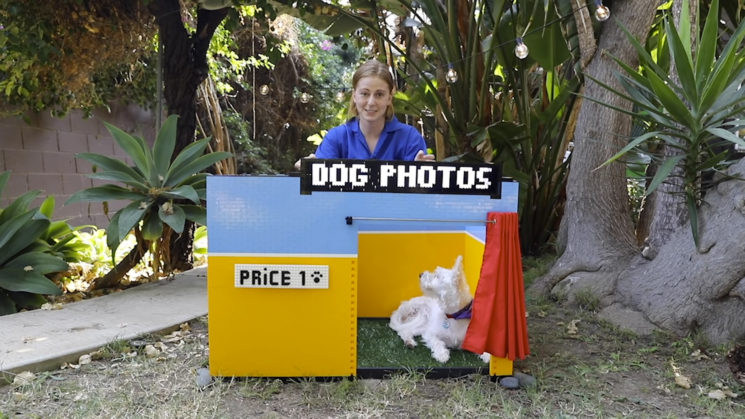 Simone Giertz is one of the most amazing people on YouTube if you’re into building and making. You might remember Simone from her Shitty Robots fame, but more recently she’s actually been building stuff that actually works and, well, she’s pretty entertaining. And sometimes adorable. In this video, Simone decides to build her dog, Scraps, a fully automated pedal-operated, treat-dispensing, doggy selfie booth.

Simone’s early attempts at getting her dog to shoot a selfie with her phone didn’t turn out too well. After all, Scraps paws are just “not that accurate”. But they are accurate enough to press on a physical pedal, which is what Simone based her dog selfie booth around.

The whole thing was built using LEGO and it’s absolutely ingenious and incredibly adorable. It was designed on the computer and then all of the bricks just showed up in giant boxes, after which she set to work on the electronics and the basic process of pressing the pedal, shooting a photo and dispensing a treat. Simone used a GoPro (lots of depth of field) in order to shoot the images and built her own mechanism to trigger it.

With everything working, Simone set about building the final selfie booth – with a few tweaks and refinements along the way and the results are extremely cute!

If you want to have a go at building a small selfie booth for yourself (or, indeed, your dog), I suspect it might be a little cheaper to build it from wood.

« Photographer speaks up after her photo was used in disgraceful UK Government ad: “I was devastated”
Anamorphic lens: What is it and why you should use it »