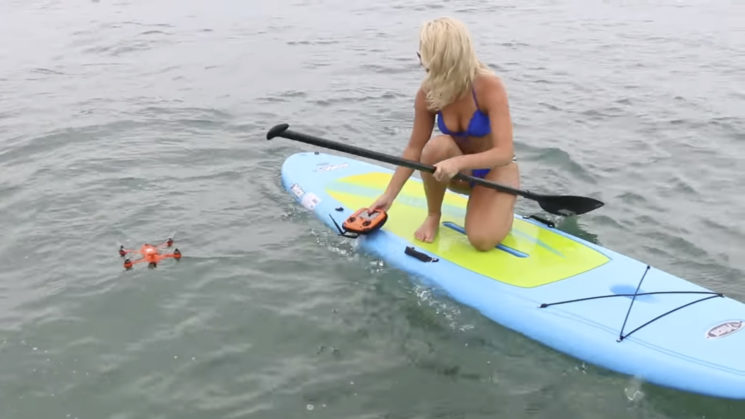 Well, when I say “swim”, it kind of bobs around under the surface before coming back up to take off. Drones that can take off from and land in water aren’t a new idea. We’ve seen it before with the original Lily Drone, although that one never saw reality.

The SPRY drone, on the other hand, appears to be very real. And it seems to have no problems with taking off from the water, landing in it, or even dipping below the surface. It’s currently on Kickstarter with a couple of weeks to go and was fully funded within 45 minutes of going live.

The SPRY has been in development for three years to bring it to the stage it’s at. According to the campaign it contains a 1/2.3″ CMOS sensor capable of shooting 4K at up to 30 frames per second and 1080p at up to 120 frames per second. Video bitrates are up to 64Mbps – which should be around 500Meg/minute, which isn’t terribly high, but I’ve seen worse.

It can take up to a 64GB Class 10 microSD card, which should give you around 2 hours of footage. But you’ll need a lot of batteries as you only get 15-17 minutes of flight time on a full battery, which takes around 70 minutes to charge back up.

The drone is waterproof with an IP67 rating, which is for immersion in up to 1 metre of water for up to 30 minutes. The controller, too, is also waterproof with an IP66 rating, which means it can handle floating on the surface of the water, being splashed by heavy waves, or even sprayed with a hose. The SPRY also features follow, orbit and other automated flight modes.

You can check out the Kickstarter campaign if you want to find out more about the drone and back it for yourself because what really caught my eye on this project was not the drone itself. No, it was a series of the behind the scenes factory tour videos showing how drones and some of their components are made.

Developing a drone and sourcing manufacturers for something like this often requires a trip or two to China. You need to negotiate and see for yourself how things are made. And, sometimes, you need to take a camera along and show everybody else, which is what they’ve done. These videos aren’t specifically about the SPRY drone, but they’re still worth a watch.

Whether it’s cameras, lenses, drones, or any other kind of manufacturer, I always find factory tours fascinating. It’s an interesting insight into a world that most of us will never see with our own eyes.

Again, if you want to find out more about the SPRY and back the project, head on over to Kickstarter. It’s currently 600% funded, and still has 2 weeks left to go. Shipping is expected in November.