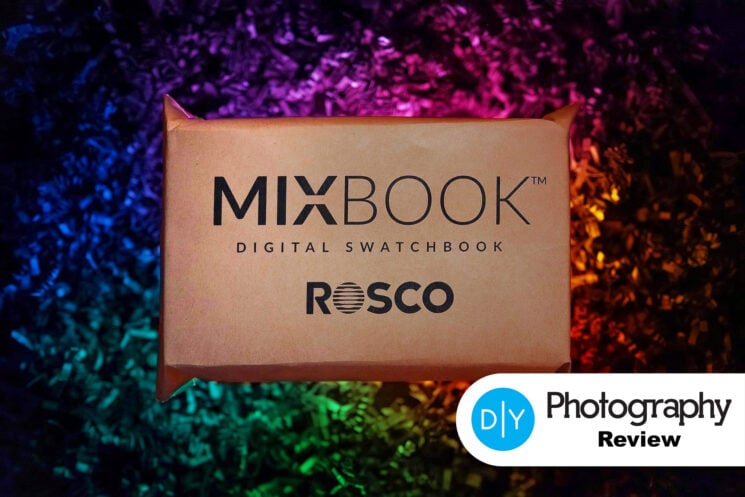 Color.  Such an important tool to help bring a time, place, or even emotions into an image.  Wouldn’t it be nice to have something that makes working with color easier? Inside this little package is a new tool by Rosco called “Mixbook“. To help creators pre-visualize gel and LED colors.

Essentially Rosco has digitized the old gel swatch books, as you can see in my reenactment of a Rosco scientist at work. Note the old gels from my swatch book flying around as the new Mixbook arises from the smokey pot. 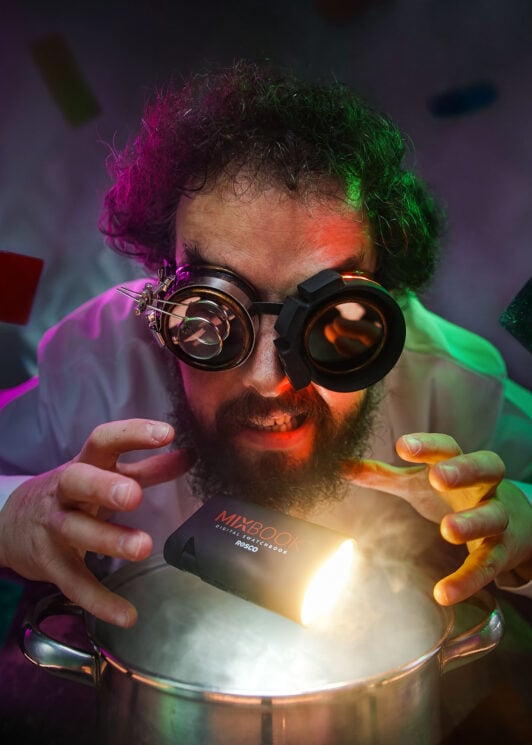 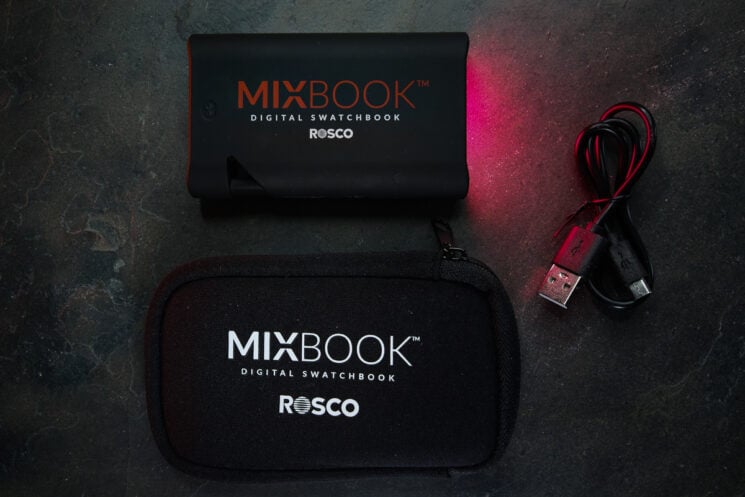 The MixBook itself is rather minimalistic with a power button, micro USB, and led indicator on the side.  The bottom has a 1/4 thread for mounting. 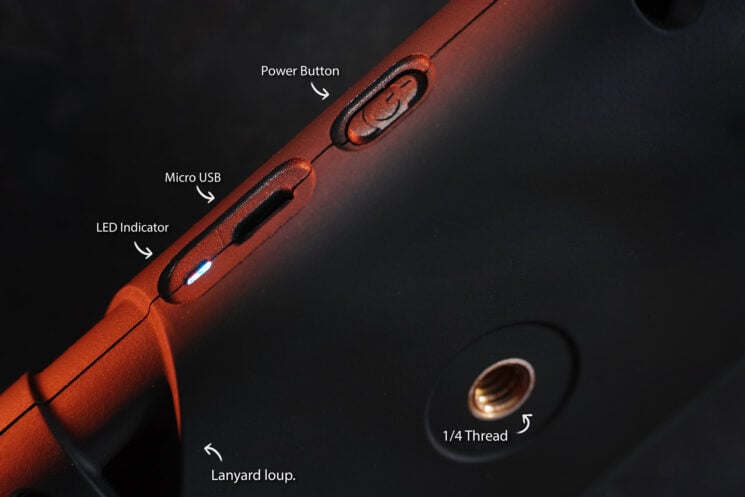 Controlling the device is done entirely using the MyMix app via Bluetooth. This is also the same application Rosco uses to control their DMG Lumière range of lights. While it might seem odd not having any external controls.  This tool isn’t designed to be used as an LED light source but rather a tool to help visualize and share color ideas when planning a shoot. 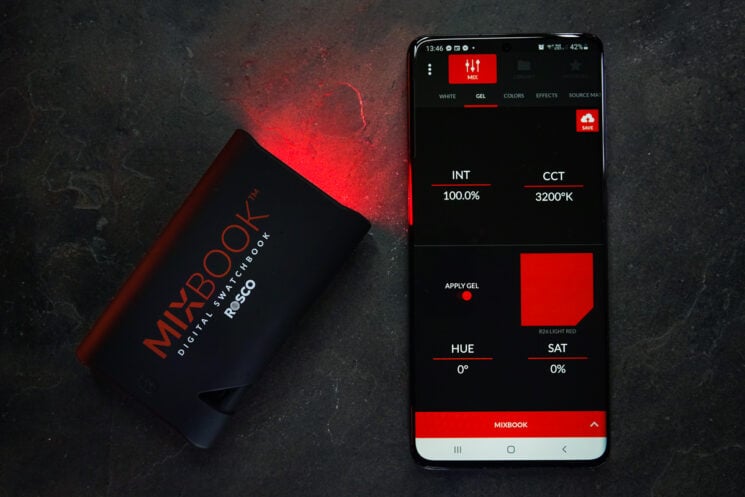 The app itself allows for a great amount of control, not only can you pick almost any color under the rainbow. 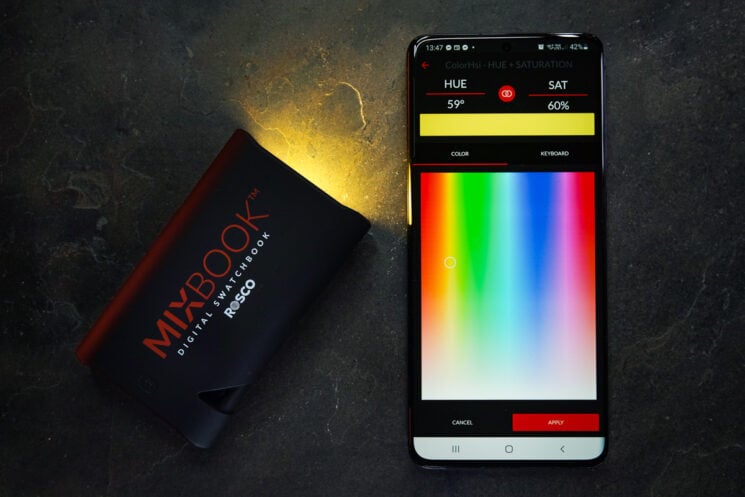 You can even upload or photograph whatever inspires you to get a color. As well as save and share your favorite colors with others. 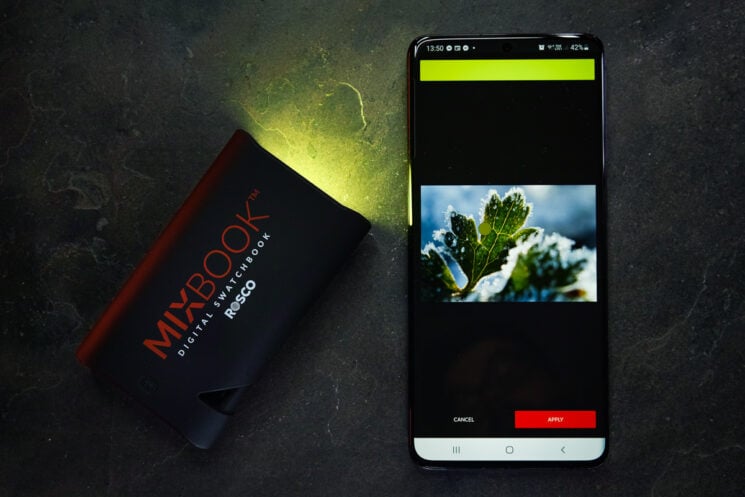 What’s really special about the Mixbook though is what’s inside. The Mixbook shares the same unique led setup of the Rosco DMG Lumière range.

Unlike most Bicolour and RGB led lights. Rosco uses a base white led and then a combination of Red, Green, Blue, Lime, and Amber led lights. This gives an average CRI of 95 over a massive 1700k to 10,000k lighting range and 137 of Rosco’s gels. 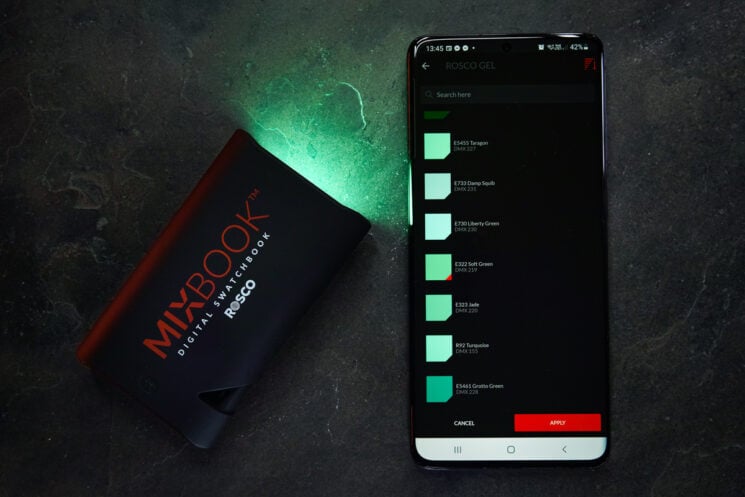 I can only imagine the fun and ease of using a set of Rosco DMG Lumière lights with the amount of creative freedom they offer along with the app and group control…  but I’m getting off track here.

As I mostly use Spiffy Gear Spekular LEDs which I love due to the high CRI and modular ability.  They are limited to 5600k so if I want to color them I need to use gels.

Using the MixBook I was able to see what sort of effect I would get with specific Rosco gels before ordering some. I decided on “E165 Daylight Blue” and “R04 Medium Bastard Amber” for one of my images to create a sunset effect. 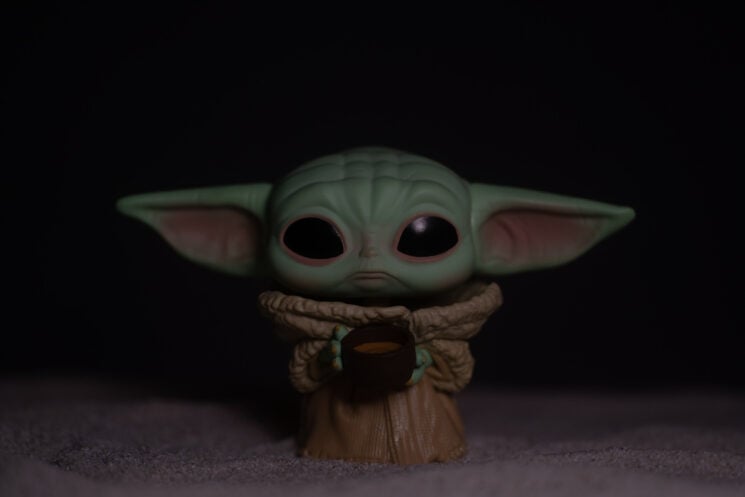 I then add 4 bars of Spekular overhead with  “E165 Daylight Blue”. As blue is often used to simulate night in media. 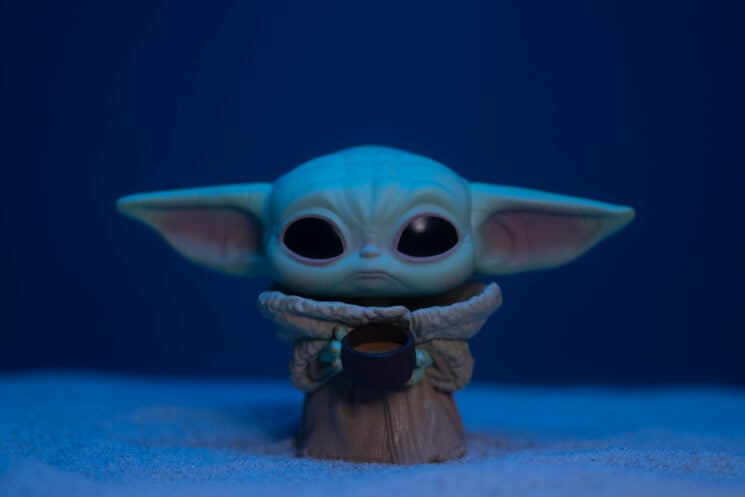 Then I placed two bars of Spekular with “R04 Medium Bastard Amber” under the table to shine onto the grey background.  This was to replicate the sky gradient you might see at a sunset. 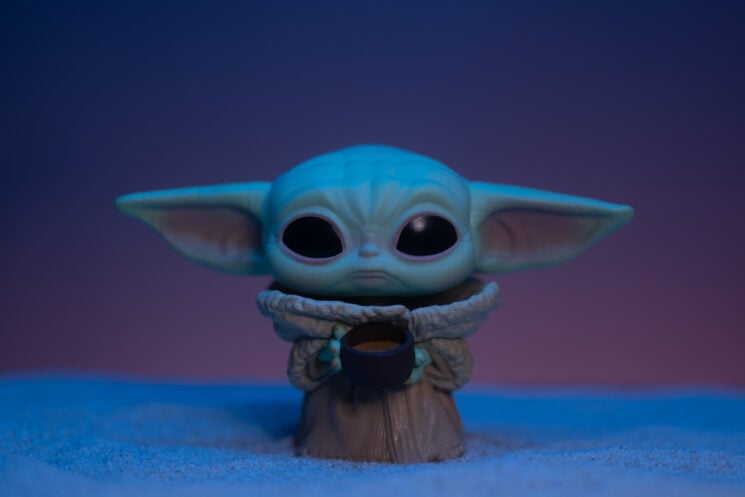 I then turned on a second set of two spekular bars in a horizontal position to the right of the frame behind the subject again with “R04 Medium Bastard Amber”. This was to emulate low sunlight coming from the side, as you can see the colors all mix well and The Child left a nice blue shadow which is similar to what would happen outside (as the blue sky is also a light source) 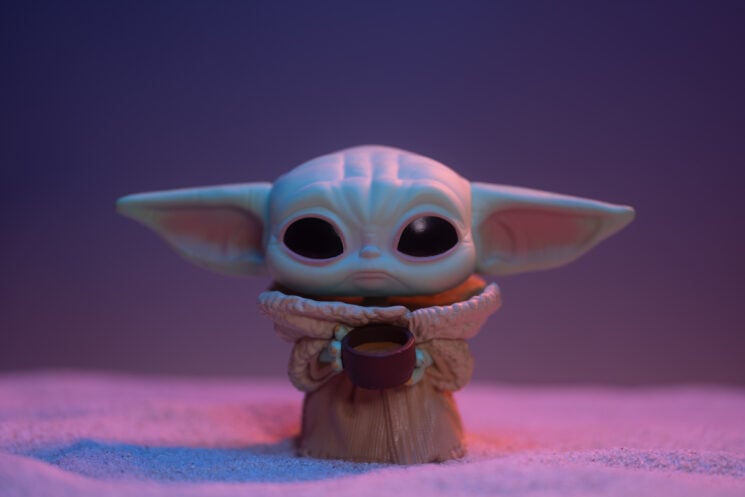 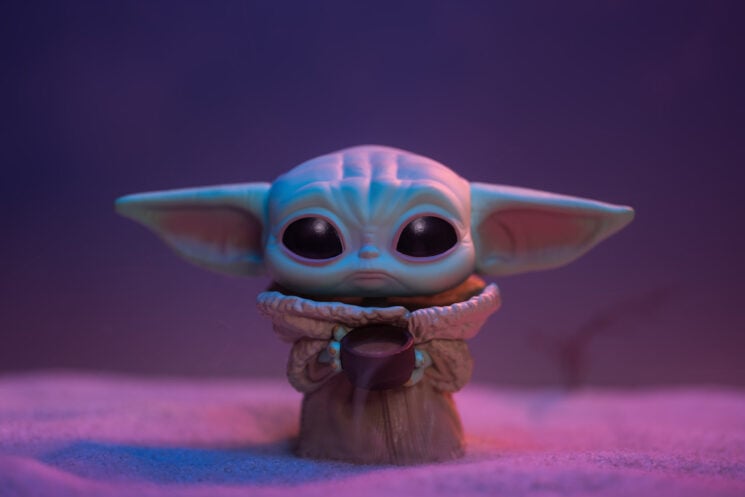 Here’s a BTS shot to see the light placement. 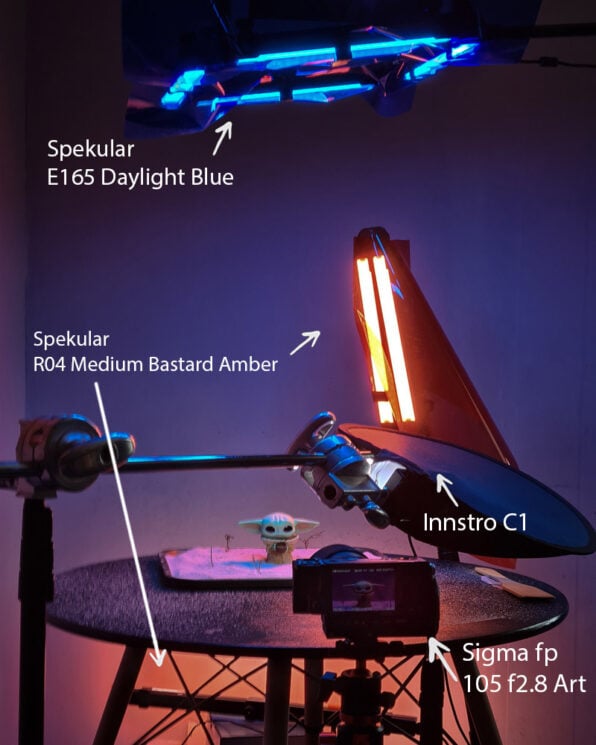 I also used the Mixbook to figure out what gels I needed for my crazy photo at the start of this article. Where I used a “R89 Moss Green” and “E049 Medium Purple” along with the “R04 Medium Bastard Amber” on my Spekular LEDs along with my Light Blaster and a beauty dish to create the final shot.  Here’s a BTS. 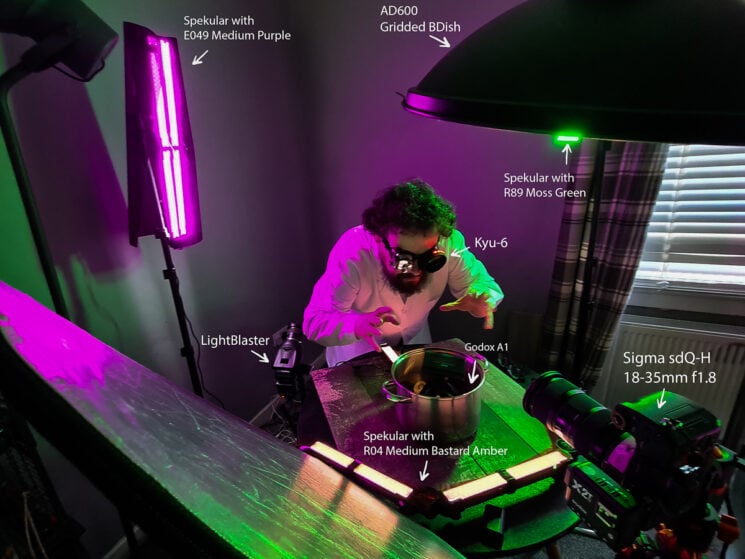 The MixBook is a great little device to help creatives see color while visualizing a shot. Making it easy to know what gels you might need before fitting or buying them.  You could even use a few together to see how colors will mix.

Being a Rosco product, though, it limited to Rosco’s own gel and LED lighting system.  But you could spend some time matching any non-Rosco gels you might already have and saving them into the app.  It also requires a phone to work so that is something to consider.

Are the old gel swatches obsolete?  Definitely not as they can also have diffusion and other effects plus they tend to fit perfectly onto most speedlights.

The MixBook is much faster and easier to use though.