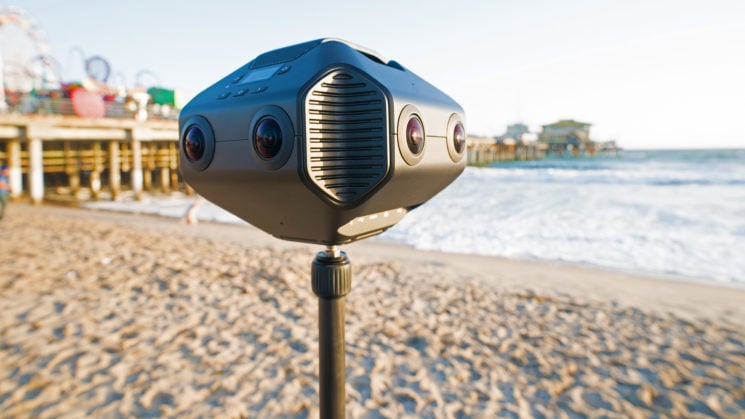 If there’s one thing that’s definitely not going away, it’s 360 VR cameras. And they’ve come a very long way in the last few years. It was only 2016, two short years ago, when the Ricoh Theta S was being lauded as one of the best on the consumer market – with 1080p video. But as the technology has become a little more established, demands have evolved.

Detu is answering these demands with the new Detu MAX. A 3D 360° VR camera that can shoot stereo video at a whopping 8K resolution. It’s also capable of shooting HDR 3D images and offers stills resolutions up to 12K. They’re launching the MAX on Kickstarter, with prices up to 40% off the expected retail price.

This isn’t the first 8K 360 camera that Detu have released. The Detu F4 Plus launched last year also offers 8K, but it doesn’t offer the 3D features of the new Detu MAX. Nor does it have many of its other benefits.

It does appear to be a very well developed set of features, and it does share some similarities with its smaller F4 Plus sibling. It uses cameras on four sides of the unit, rather than just front and back. Of course, the MAX has two cameras on each side to simulate the left and right eyes of human vision. Unlike consumer cameras, such as the 5.7K YI 360 VR, the Detu MAX is designed as a pro-level camera. So, it also comes with a pro-level price tag. Once it goes on general sale, prices will start at $3,599. At the moment, the Kickstarter pledges are at about 60% of that, starting at $2,199.

But that price does include RAW DNG and HDR stills, which will be fantastic for 3D artists and visual effects houses who want to create high-resolution environment maps for rendering and compositing.

It also includes twice as many cameras as many other 8K 360 cameras on the market, in order to offer a 3D stereo view. This is a huge advantage over most other 360 cameras which only offer a single viewpoint. It definitely makes a difference to the feeling of immersion when it comes time to watch the content back in a VR headset.

The real AI object tracking is particularly cool, and potentially quite useful, too. It’s ideal for situations such as live streaming, where you might want to just set up a single camera, and have the view follow your subject as they move around the scene without having to have your viewer get up and turn around.

The streaming side of things is something I’ve had a lot of fun with when using 360° cameras. I’ve done it with the YI 360 VR as a behind the scenes camera on photo shoots. It’s a great way to allow my audience to follow the shoot, see how I work and ask questions as I go. But it doesn’t follow me. If I move, the viewer has to turn their head to follow. One thing on the live streaming subject, though, which I don’t see addressed here, is external microphone support. It does offer four built-in microphones, but there’s no mention of an external input for sound.

That’s the biggest issue for me with the YI 360 VR. I can’t power from external batteries and run an external microphone simultaneously. So, either I have a live stream with a long running time and crappy sound using the internal microphone, or I get great sound using a wireless lav and a stream that only lasts for an hour at best before I have to recharge. I don’t see any mention of microphone inputs on the Detu MAX, or if the live streaming software can pull an audio source from elsewhere.

One huge benefit to live streaming on the Detu MAX over that which I currently experience with my YI 360 VR is that the MAX can both stream and record at the same time. With the YI, when I stream, the best quality recording I have available to me is that which I can download from YouTube or Facebook afterwards.

On the battery side of things, the Detu MAX uses a fairly substantial 4800mAh Lithium-Ion battery. This might sound large, but it also only offers about an hour of running time (it does have 8 cameras to power, remember). The socket underneath the unit (shown above) does suggest that it can be powered externally, though, if you need to shoot for longer.

The connection ports that it does have, though, are HDMI for 4K 30fps stitched footage output & realtime preview, RJ45 Ethernet for live streaming, microUSB for file transfer and 4G module as well as built-in WiFi for hotspot connection and remote control through iOS or Android devices.

Overall, it’s a rather impressive looking unit, especially with DNG RAW and LOG video support. I’d be very curious to try one of these when they become available to see how well it lives up to expectations in the real world.

If you want to find out more, check out the Detu website. And if you want to pre-order your own, with prices starting at $2,199 head on over to the Detu MAX Kickstarter campaign.

« Here’s how to shoot great video with any camera. Even a toy camera
Nikon 1 mirrorless cameras have officially been discontinued »