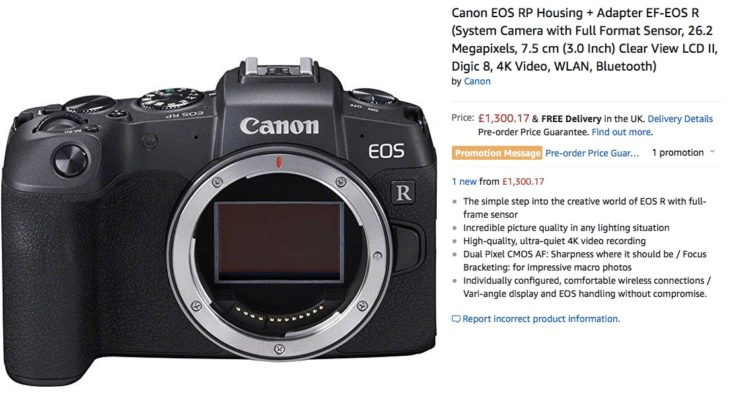 The buzz regarding a possible new entry-level Canon RF mount mirrorless camera has been getting quite intense over the last few days. And now, just the evening before an official announcement is expected, the entire spec sheet seems to have leaked.

Thanks to Amazon UK jumping the gun, we also have some idea of the price, too, with the basic model and EF to RF lens adapter costing £1,300 and US kits rumoured to start as low as $1,299.

The complete spec sheet is down below, and I guess we’ll find out tomorrow just how accurate it is, assuming the announcement actually comes tomorrow. But here are the highlights.

As with the EOS R, it’s compatible with any flash that works with the EOS DSLRs, including the 3rd party ones and supports high-speed sync up to its maximum 1/4000th of a second shutter.

Where it gets interesting, though is with video. Despite basically looking like a mirrorless version of the 6D Mark II, the EOS RP is said to have 4K video at up to around 115mbps. Unlike the Canon EOS R, it’s all 8-bit video, even piped out externally through HDMI.

But what the spec sheet doesn’t specify is any kind of crop factor. Could this finally be full frame 4K from Canon? Did they just neglect to mention the crop factor? Or am I going blind and I’ve just missed it?

For $1300 in the US, or £1300 in the UK, it sure will give the Sony A7III a run for its money, especially if it really can shoot uncropped 4K video. I find it unlikely, but it would obviously be pretty awesome. I guess we’ll find out tomorrow how accurate these specs are. Five new RF mount lenses are also rumoured to be announced tomorrow, too.