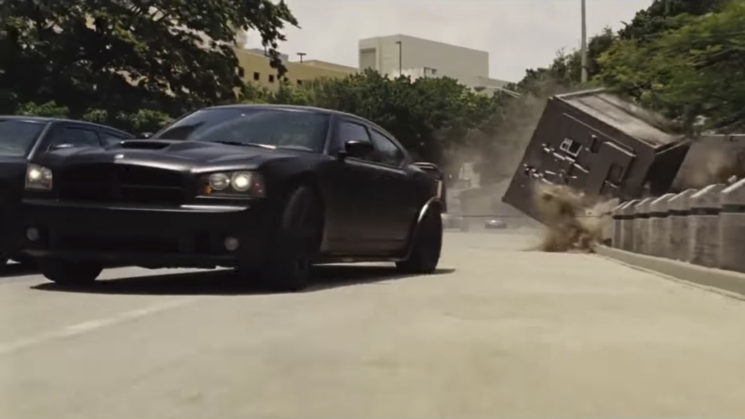 The Fast & Furious franchise is notorious for using CG in their movies. Even though they have very highly trained stunt drivers, and even gave the actors some rather intensive driving lessons, some things are just easier and safer when done with CG. But they also do a surprising amount of effects practically, when possible.

One sequence that seemed fairly obvious as CG in the imaginatively titled fifth instalment of the series, Fast Five, sees our heroes dragging a 9,000lb vault containing $100 million through the streets of Rio De Janeiro (although it was actually filmed in Puerto Rico). Except, it wasn’t CG, it was shot for real, with a real 9,000lb vault.

Presented by Jack Gill, stunt coordinator on Fast Five, the 20-minute video from Vanity Fair describes, in quite some detail, the process of creating this epic five and a half minute chase sequence.

When I first saw Fast Five, I thought for sure that most of this bit had to be CG. And the bits that weren’t, well, they were just using a lightweight prop vault, right? But, no. It’s just a whole lot of very careful, well thought out planning and execution, with a lot of tests and rehearsals.

Several vaults were actually used for the sequence, including some real 9,000lb vaults being dragged by a pair of real Dodge Chargers around the streets of Puerto Rico. Some were built around trucks and were able to be driven from the inside to create a more predictable (and safer) motion path on certain shots.

Here’s how the final sequence plays out in its entirety.

So, yes, the vault was real, the driving was real, the crazy destruction was real, and most of us probably just assumed from watching that it was all done with a big blue screen stage and a computer.

I don’t think most of us will be trying to emulate this type of insane practical effect, but it just shows what you can do with them when you really put your mind to it – and have a near-unlimited budget.