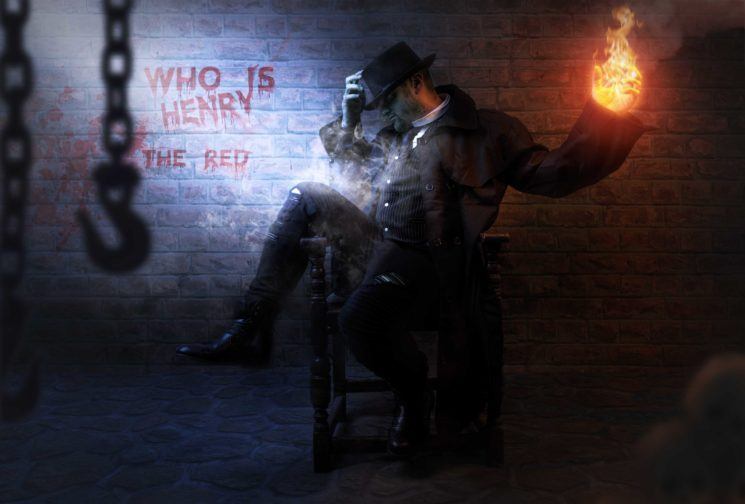 One of the most important factors in a photographer/digital artists career is finding their own style. A signature look. It can take some photographers years to find theirs, but some find their voice straight away. I think I was lucky in that my style evolved quite quickly and quite organically. In this article, we will go through various elements I believe, contribute to what some people call a stylized image, but first, where does our style originate from.

My images have been described as very stylized, painterly and surreal. All terms which I am quite happy to take. If I sit and think back, it seems as if this how it was always going to work out. I believe your style is born from your influences, experiences and how you perceive the world. As a young boy, I read lots of comic books and graphic novels. Each page I was hit with the strong colours, and bold outlines. Every image told part of a larger story. Another big part of my younger years was art. My Grandad taught me about art at an early age. I knew more about Picasso at ten then I did maths. He would teach me how to use shadow in my sketches, shading areas to create form and with lights and darks….Hmmm sounds quite similar to another technique I know. A lot of my youth was spent watching movies. I’m a big fan of cinema in general, but I was obsessed with horror and fantasy movies. I’m quite lucky to have grown up in the 90s but still got to experience the 80s. A period in which horror and fantasy films were at their most inventive. A culmination of crazy ideas with striking visuals, outlandish characters, and costumes. I believe part of the failure of horror movies today is a lack of the fantastical, horror movies are played too straight, paint by numbers studio releases…but I digress.

All these factors shape my style as it is today. If you look at my images, the style is built up with elements from all these influences. Maybe if you are struggling with finding your own style, you should look back into your own influences. Look at what you used to do when you were a child or teenager.

Now we’ve spoken a little on finding your style, let us look a little more into my style which is stylized composites, although not exclusively. So what does it take to create a stylized image, what is it that defines it as so.

Here is a before and after of an edit, I did for Deadevil Beauty. 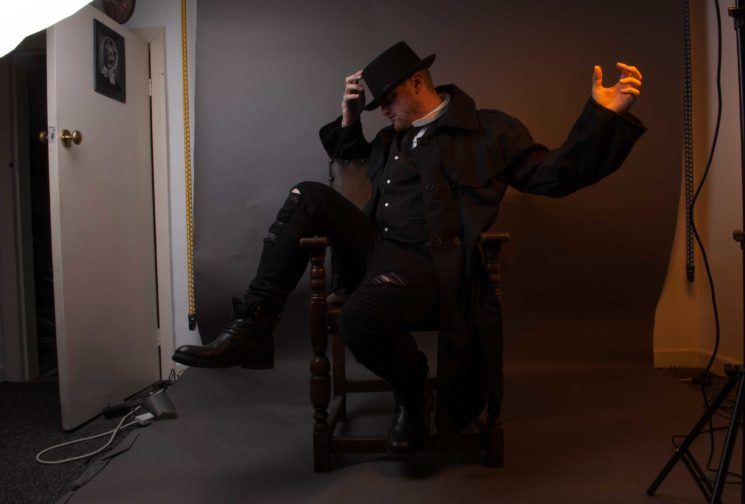 I think we would all agree that this is a stylized image….but why would we say that? Well, I think it comes down to various factors some of which are Location/setting, outfits, colours, the editing, elements used and story.

In this image, our location seems to be some kind of crypt. So off the bat, we have an unusual setting which straight away leads us away from the norm and isn’t your typical everyday portrait. Too me stylized images always have a little surrealness to them, and a crypt is pretty surreal.

Outfit wise, I wouldn’t say we are bordering on fantasy but what we have is a Victorian looking character dressed in all black with a long overcoat. It is reminiscent of a movie like character. Not truly in our world, but not unbelievable.

I believe colors and how they are used play a big part in a stylized image. They are usually bolder and brighter and more saturated. If we look at the image above we see it has a strong split colour. We have blue on the left and a red/orange on the right. Of course, we need a little motivation for the colour, so the blue is representing the daylight that is creeping through, and the red/orange settles in with the fire. Cold/hot is quite a common colour harmonie, and you can learn about those here. 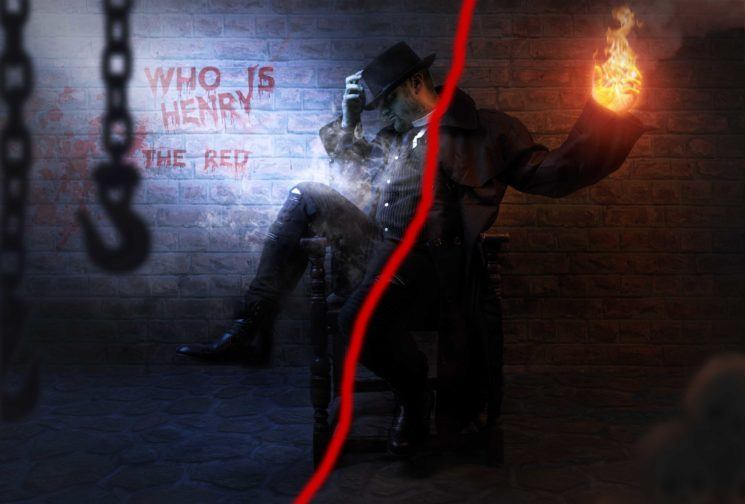 Of course, this ties in with the next factor, the editing. Stylized images tend to be edited more than traditional photographs. I know some people who take a shot and spend ten minutes in Photoshop, and that is it done. For myself, it usually around 30 minutes up to in some cases ten hours! Depending on the image. A large part of the editing is dodge and burn. The more you dodge and burn, the more you get that painterly feel. And i like to dodge and burn a lot. 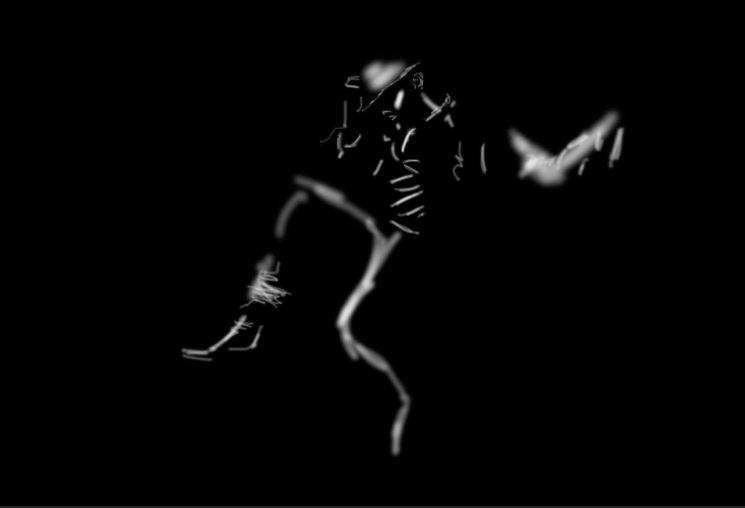 And here is my burn layer…. 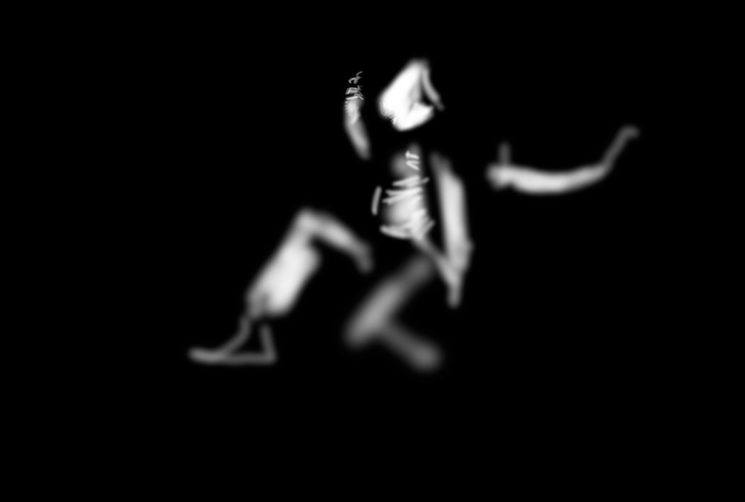 This image the dodge and burn weren’t as extreme as it can be on some images. But you still get that painterly feel which I love.

The elements used in the image also can dictate if it is stylized or not. Usually, the more stylized images have the fantasy or surreal elements in them. Things that you wouldn’t find in a traditional image. If you look at some of the elements in this image, we have a hand that is creating fire. You don’t see that every day haha. 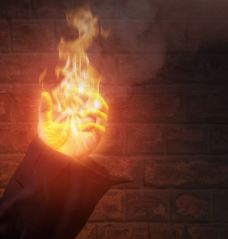 We have some skulls towards the bottom right….which were stock skulls from Deviantart. 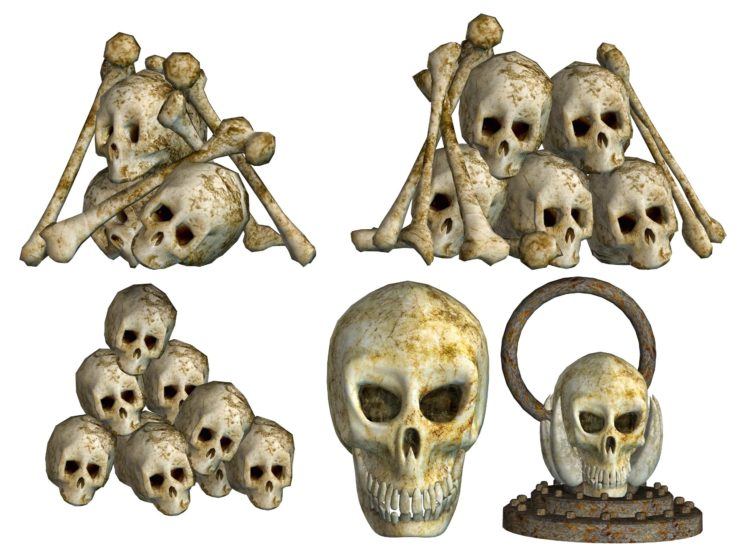 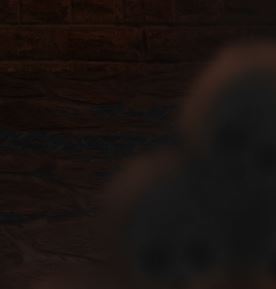 And then we have what looks like meat hooks hanging from the ceiling. Again all these elements together create a surreal scene; it’s not something you would ever probably see…..unless you are into some freaky extra curriculum activities haha.

And finally, the last factor has to be the story. Every image at its core should be revealing some story to the viewer, but what separates a stylized image from a traditional image is the type of story they are telling. Stylized images usually deal with fantasy, horror, superheroes and many other outlandish tales. They fire up the imagination and take us to places we wouldn’t normally see. There are many ways to reveal a story, whether it be through little clues, image metaphors or how the elements connect in the scene. Always think about what you are trying to say beforehand so you can build your image piece by piece with a final goal in mind.

In this image, we have various storytelling motifs. We have a little mystery with the writing on the wall. The main character has smoke rising from him where the daylight is touching his body, which I’m pretty sure doesn’t need me to explain it. The story is backed up with all the elements and surroundings. There isn’t a definitive answer to who the character is, but that is where the fun lays. You have to use your imagination and make your own decision.

And there we have it, my opinion on what it takes to create a stylized image. I’m not saying it is the definitive way. Art is very subjective so if you disagree or agree I would love to hear what you have to say.

How to create a stylized art shoot on a shoestring budget