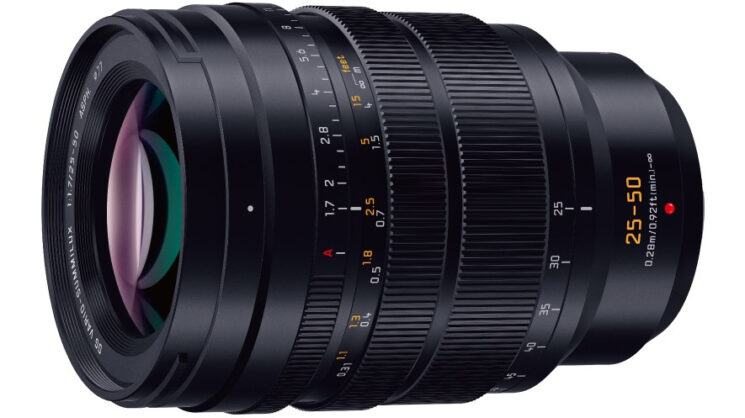 Last week, the above image leaked of the upcoming Panasonic Leica DG Vario-Summilux 25-50mm f/1.7 ASPH Micro Four Thirds lens, first mentioned during the Panasonic GH6 development announcement. Now, Nokishita (who else?) has leaked some of the specs for the new lens, which is expected to “probably” be announced sometime this week.

Whether or not we’ll actually hear an official announcement this week remains to be seen, but it certainly is an attractive looking lens. If the Panasonic Leica DG Vario-Summilux 10-25mm f/1.7 ASPH price of around $1,800 is anything to go by, though, it definitely won’t be cheap!

Nokishita tweeted that the lens has already started showing up in the product list for overseas retailers, so I expect an announcement is close, even if it’s not this week. But according to the specs leaked today, here’s how things look so far (we’ll update this as we find out more to fill in the blanks)…

The 16 elements include one aspherical lens, three ED elements and one UHR element. While the minimum aperture isn’t included in the leaked, the smallest you can stop down on the Panasonic Leica DG 10-25mm f/1.7 is f/16, so I expect this’ll probably be the same. There’s also no mention of lens coatings or weather sealing, but again, I think we can expect the same as the 10-25mm, with the usual coatings to minimise flare and ghosting, increase contrast and clarity, etc. along with the usual dust and splash resistance.

There’s no telling exactly what day the lens might be getting announced, even if it does come this week, as there have been no hints or teasers from Panasonic themselves yet. But even if it was scheduled for this week, with Sony pushing back their expected ZV-E10 announcement, I think we can possibly expect the same from Panasonic. So, maybe next week.

We’ll keep you updated as we find out more.