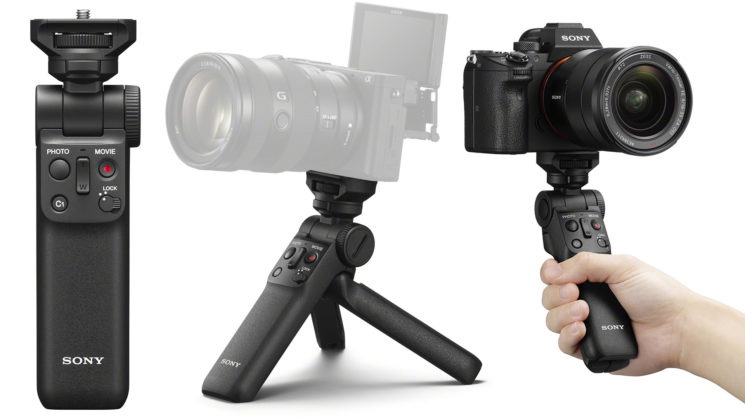 Sony has announced the GP-VPT2BT Wireless Shooting Grip. Don’t get too excited, this isn’t a “grip” in the traditional sense that allows you to more easily shoot portrait orientation without contorting your arms. This is sort of like an advanced mini tripod. It’s not a new concept, and Sony has had the GP-VPT1 out for a while now, but the GP-VPT2BT takes this to the next level with built-in Bluetooth for controlling your camera remotely.

Unlike the original GP-VPT1, the new GP-VPT2BT is completely wireless. This does mean, however, that it doesn’t work with all Sony cameras. Just the ones that contain Bluetooth. But that’s still quite a nice list, covering most of their most recent releases.

Sure, it doesn’t have the wide range of compatibility of the original VPT1, although the fact that this one does not have any cables coming out means that Sony’s able to offer moisture and dust-proofing. As with weather sealing on just about all Sony gear, they don’t 100% guarantee it. But it is certainly going to help, removing that major potential point of ingress.

Despite some of the bodies mentioned in the list above, it’s pretty clear that the primary target for this product is vloggers. Although, it would be quite handy for photographers just shooting A7 and A9 series bodies that want to have something shoot a little behind the scenes stills or video, too, thanks to the tripod feature. Of course, if you just want a mini tripod, something like the Manfrotto PIXI is substantially cheaper.

And if you’re planning to vlog on a little Sony, you’ll probably want to move the shoe mount, so you can flip the screen up and still see it.

The Sony GP-VPT2BT is available to pre-order now for $139.99 and is expected to ship at the end of this month.

How To Look Good On A Webcam or Vlog