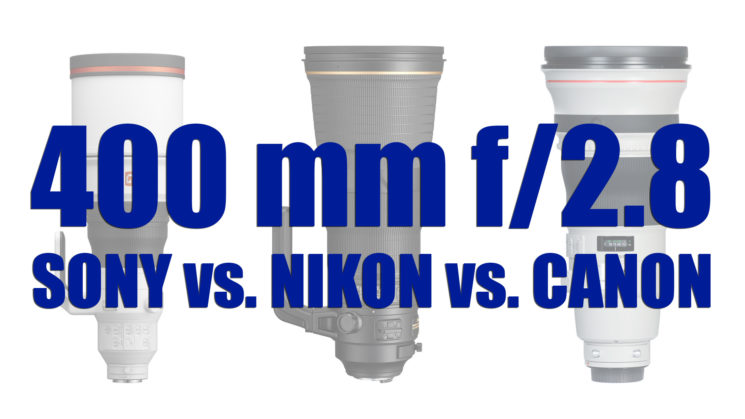 Sony has just launched the $12,000 lightweight monster FE 400mm f/2.8 GM lens, which was rumored last year. Matt Granger got his hands on this lens to test it out and see how it performs in different situations. And not only that, but he compared it to respective Nikon and Canon lenses to see how the Sony stacks up against them.

The most obvious differences are in the weight and the price. Canon is the cheapest of the three, with the price of $10,000, and it’s also the heaviest, weighing 3.9kg / 8.47 lb. It’s followed by the Nikon, which is priced at $11,200 and weighs only slightly less, 3.8 kg / 8.38 lb. Sony’s new lens is the most expensive and retails at $12,000. But it’s significantly lighter than Nikon and Canon, weighing 2.9 kg / 6.4 lb. Matt took all three lenses to the test and used them in various situations: from shooting portraits to shooting a soccer game.

First, Matt tested all lenses for portraits. Steph was standing still and posing, and as you can see in the video, all lenses performed really well. The background separation is really prominent, and we could have seen some examples of this before, shot with a Sigma 500mm f/4 DG OS HSM.

Next, Steph ran towards Matt so he could test the AF tracking. Once again, all lenses performed really well and kept the subject in focus all the way. The image quality is astonishing with all three lenses, according to Matt. But here are sample photos for you to check them out and look more closely if you like.

Matt and Steph also shot a soccer game with all three lenses. The weight difference is the most obvious here, even at the very beginning of the match. Sony is definitely easier to handle for handheld shooting, considering that it’s significantly lighter than the other two. Matt points out that Sony is also focusing much faster than Canon and Nikon. However, it often happens that the camera just won’t start the focusing process. Matt isn’t sure is it about the lens, the camera, the firmware or the combination of factors… But it sure can be annoying. Still, when the AF is working, Matt says it’s absolutely amazing

Finally, Matt used an adapter to add a Nikon lens onto a Sony body. It didn’t perform that well, as needed to focus manually most of the times.

The most obvious difference is in weight, and it is significant between the three lenses. This is especially obvious if you’re shooting handheld. Matt also finds Sony much better balanced in hands, because most of the weight is in the back of the lens.

Matt loves how Sony performs when focusing, and Sony’s eye-AF is revolutionary. However, sometimes the camera wouldn’t start the AF process at all. As mentioned before, it could be a quirk in the camera body or in the firmware, but if that’s fixed, the new Sony 400mm f/2.8 GM lens could be a great choice for professional sports or wildlife photographers.