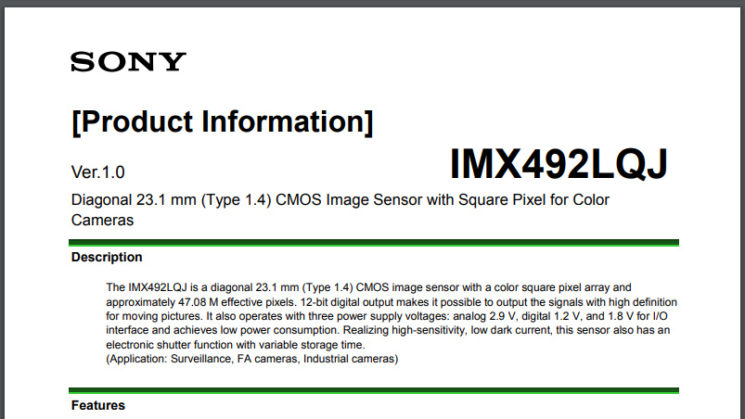 So, there’s still no news from Sony about the mythical A7S III, but they are working on 8K sensors for smaller cameras. In this case, though, it’s not full-frame, or even APS-C, but Micro Four Thirds. They have just released the spec sheet for a new IMX492 47-megapixel Micro Four Thirds sensor that offers 17:9 and 4:3 aspect ratios. And it offers them in 8K resolution at up to 30 frames per second.

Given the 4:3 aspect ratio (and only a 10-bit ADC), it’s doubtful that Blackmagic will be announcing a Pocket Cinema Camera 8K anytime soon unless they plan to start offering some anamorphic & VR features and are willing to lose BRAW (unlikely). But this sensor might appear in a future Panasonic camera. Perhaps the GH6 is on the horizon? After all, the GH5 is a couple of years old now and while it’s still a great camera, it’s kind of been forgotten about lately.

The Sony document describes two versions of the sensor. One for colour, and one for monochrome. Let’s look at some of the highlights…

The “Low power consumption” is interesting. Naturally, a sensor that uses less power means that you should, in theory, have batteries that last longer. However, processing this much data isn’t cheap. Those power savings at the sensor might be offset by the image processor, leading to similar or potentially even worse battery performance than we’re seeing on the current crop of video-oriented mirrorless cameras.

You can read the complete spec sheet here, but I think it’s safe to say that we’re going to start seeing some pretty crazy cameras in the near future.