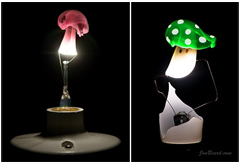 Back when I started DIYP, one of the first successful posts was a project called A Burning Light Bulb. The post explains how to break a light bulb and photograph it’s burning filament. This is really a fun photography project for a weekend (as long as you are careful with the glass and electricity).

For the new video with lots of great tips from Jon Beard, scroll down after the jump. For some blogging ponders read on. 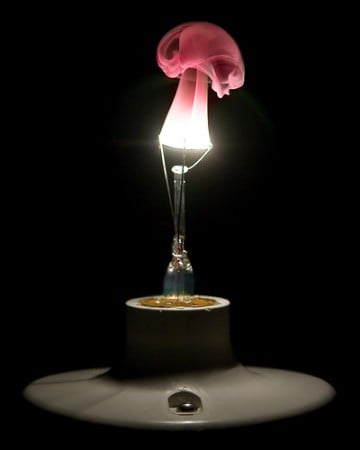 A few days later I noticed another huge peak of traffic coming from Digg. Apparently a photographer who did this project linked to the tutorial and his image got featured in the front page of Digg. (For those of you not in the blogging scene, hitting a front page with Digg can – and usually will – crash your server with traffic).

That photographer is Rich Legg, and this is how I go to know him. 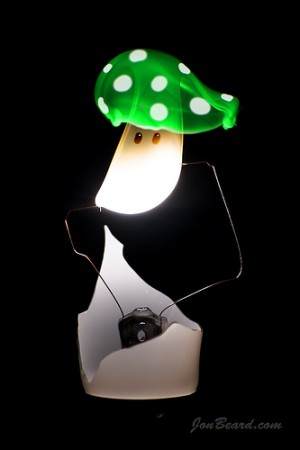 Fast forward three and a half years and a second spike of traffic appeared from Digg. Same project got front page again. Apparently a second photographer did a similar project, giving it a twist with coloring the smoke as a 1UP Mario Brothers mushroom.

This time the photographer is Jon Beard who has a really awesome blog. Now, Jon was cool enough to make a how to video of the process with lots of tweaks and improvements to the original project.

I loved the tips Jon provided in the vid:

The other cool thing Jon did was to set his exposure so he gets a black frame on a dimly light room. In the original project, I asked to turn the light off before flipping the switch on the bulb. Jon’s way is nicer since now you can actually see what you are doing and not bump into the tripod on the way back from the bulb to the camera.

Lastly, Jon uses a sequence to capture the entire burn out sequence. This is better than trying to shoot the exact second that the bulb burns. The chance of getting one or two good frames is higher this way. This is why I did the same on the burning match project.

So I don’t really know why Digg likes the burning filament so much, any thoughts?