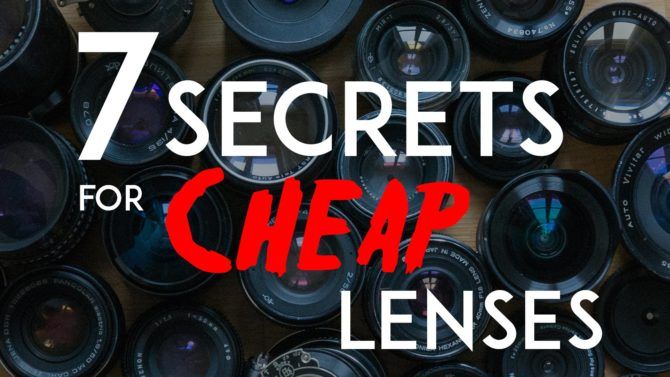 Over the last few years, cheap lenses have become a big thing, and it’s driven the prices of a number of old cheap lenses right back up to where they used to be when new.

This video from Mathieu Stern of the Weird Lens Challenge presents us with his top seven tips to buying cheap lenses online.  Some of them just make good sense, while others are not so obvious.

Mathieu raises some great points in the video, and I’ve added a little more to each of them below, with some examples of how these methods have helped me in the past.

Search around the obvious

When it comes to older equipment, many of those who might’ve inherited gear that they’re currently trying to get rid of don’t really have a clue what it is.  They don’t know that terms like Zeiss, PC-Nikkor or f/1.2 actually mean, and so don’t always include them in listings.  Because they don’t know what they mean, they often severely undervalue the lens’s price.

There is not just eBay

Again, this should be an obvious one, but we often forget that there are more places from which you can purchase used equipment than eBay.  Several popular photography forums in the USA and the UK with “for sale” sections immediately spring to mind, as well as several classifieds sites.

I’ve not done this with lenses, but I’ve picked up a couple of great 35mm mechanical film bodies in the past that were marked as “Spares or Repair” and went for next to nothing that simply needed the light seals changing, or a little gunk cleaning out in order to work as well as they day they were manufactured.

I’m still waiting, three years on, for a good deal on some Fuji GX680III parts to complete a fully working camera.  I’m in no rush.  I’ll get it eventually, without having to deal with bidding wars.

Being patient is absolutely key with some items.  If you want to be surprised often, or at least get something to tide you over for a while, have a real big wishlist.

Establish Your Own Limits

This helps with the above advice of being patient.  If a lens regularly sells for around £150, and you’ve decided you don’t want to pay more than £50 for it, then don’t go and bid on the one at £90.  Stick to your guns, stay within your limits, be patient, and it’ll eventually pay off.

I can’t tell you how many times I’ve gone over my limit on something, and then seen exactly the same thing sell for half the price a few days later.

This is a bit like the photography forum classifieds sections I mentioned above.  Pro sellers know what they’ve got, and you’re probably not going to find a good deal.

You might think that this might be a good “Take Risks” opportunity, but most of these selling equipment as spares or repairs know it’s far beyond a simple repair, or they’d do it themselves.

Search for Gold in the Junk

Sifting through the junk can take time, so you’re less inclined to do it, but that’s exactly why this can be such a valuable source of great cheap gear.  If you can’t be bothered to sift through job lot listings and big clearances, then neither will most other people.

One other suggestion I will give you is to search locally on sites like eBay and look at auctions that are “Collection Only”.  Or, search near friends locations that wouldn’t mind going and picking up your winnings for you.

I won a complete black & white darkroom with a total used value of a little more than £1,000 a few years ago for only £53, simply because the seller didn’t want to have to package it all up and ship it out.  But when the items included both a Durst M601 enlarger and a wall mounted De Vere 4×5 enlarger, who could blame him?

I bid on that auction for only two of the items listed that probably would’ve cost me around £150 on their own.  So even if I’d just paid £53 for those two items I was already saving a decent amount of money.  The rest of the darkroom equipment I ended up trading for other photography equipment I needed.

What tips do you have for finding inexpensive lenses and other photography equipment online?  Let us know in the comments.