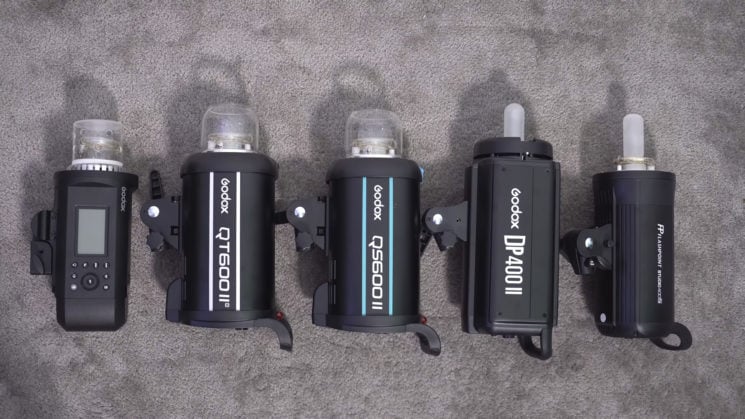 People make a big deal about the AD600 (now AD600 Pro) and AD200 strobes when it comes to Godox. They offer a lot of power in a nice easily portable package. But they offer so many more strobes than just these two. While those mentioned above, along with the AD360II are fantastic for shooters looking to get light on location, there are quite a few photographers who never take their lights out of the studio.

And that’s where this handy video from Rob Hall comes in. It covers and compares the entire range of mains-powered Godox studio strobes compatible with the X1T, XT32 and XPro triggers. It’s a pretty extensive list of lights covering a range of requirements, and those on 220-240v power even see some flash duration perks that 110-120v countries do not.

So, where to begin? Well, I suppose first it’s best to list all the strobes mentioned in the video.

Then there’s those offering 110v and 220v flavours.

Some of the lights mentioned do appear to be a little more difficult than others to obtain. So, bear this in mind. You may have to order directly from China for some models. But, don’t forget to check Godox regional distributors around the world like Adorama and Pixapro.

One thing to note with all of these lights is that they allow power adjustments in 1/10th of a stop increments. Unfortunately, the Godox XPro trigger (currently) doesn’t. Hopefully, they’ll change this with a future firmware update. This means, though, that for now, while controlling them remotely, you’ll be limited to 1/3rd stop increments. Or, you’ll need to use the XT32 trigger.

Anyway, with that out of the way, how do all these lights compare? What do all the model numbers mean? Well, first you have to look at which product lines are aimed at what type of photographer.

The QTII strobes are aimed at the speed demons. These things have crazy fast 0.5-0,9 second recycle times (even for the 1200Ws version) with flash durations as fast as 1/35,086 seconds for 220v or 1/22,988 for 110v. They also offer high speed sync support, and the only strobes in this lineup which do. HSS isn’t something you’ll want to use often in a studio environment, but there are times it can definitely be handy. 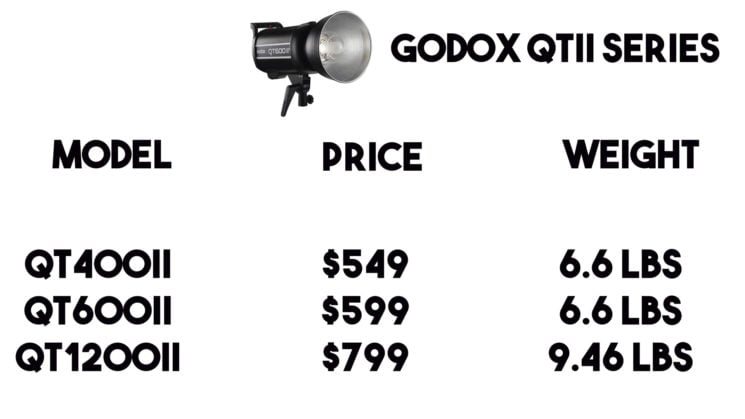 Product photographers are also a clear target with the QT line of strobes, offering a mask function. Rob goes into this feature a little more in detail in the video, but essentially it allows you to take multiple shots, cycling through each of the lights. So, if you have three lights set up covering your product, you take four shots. One has all the lights going off together, the next has just your key, the next just your fill, and finally your rim or background light.

You’ll need to be locked off on a tripod for this mode to really be all that useful, but in theory, it allows you to more easily mask out your subject in post using the set of images.

Next up are the QSII series. These don’t have HSS, dor the mask function, their recycle times are 0.3 to 1.5 seconds, with quite modest flash durations.  There’s four models in this line ranging from 400Ws to 1200Ws. These are billed as Godox’s most reliable series. 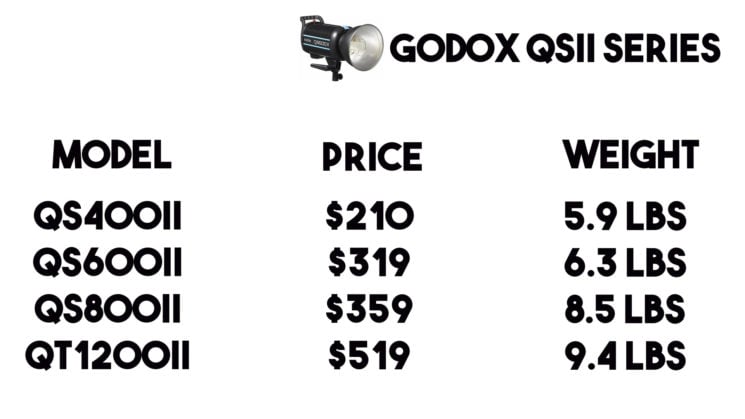 hile the build quality of these seems pretty tough, most lights don’t take much abuse if they never leave the studio. Rob believes these are best designed for those who need power in the studio, but don’t want to pay the extra for the high speed & masking features of the QTII series.

The GSII series comes in as a nice budget series strobe ranging from 200Ws to 400Ws with very reasonable prices. On paper, the specs seem similar to the QSII series. The only real difference is the weight, suggesting the build quality isn’t quite as tough. But, again, in the studio, does that really matter? 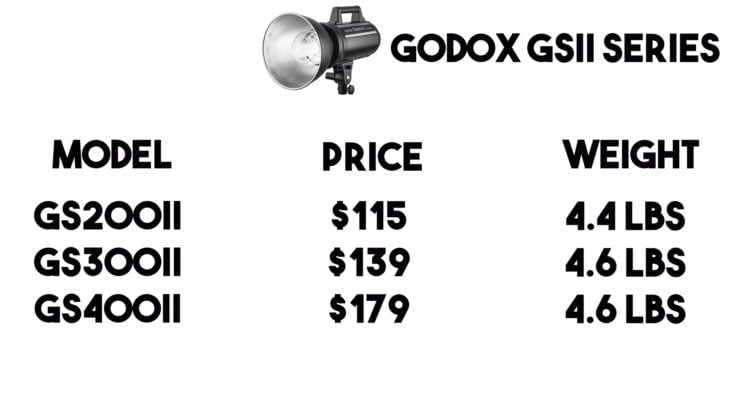 Another thing of note with the GSII series, if you get the 220v series, your recycle times get cut in half. This makes sense if they receive twice the voltage at the same current.

Next down the line is the DPII series. These come in with a power range of 300Ws to 1000Ws and are also pretty low budget, given their power. 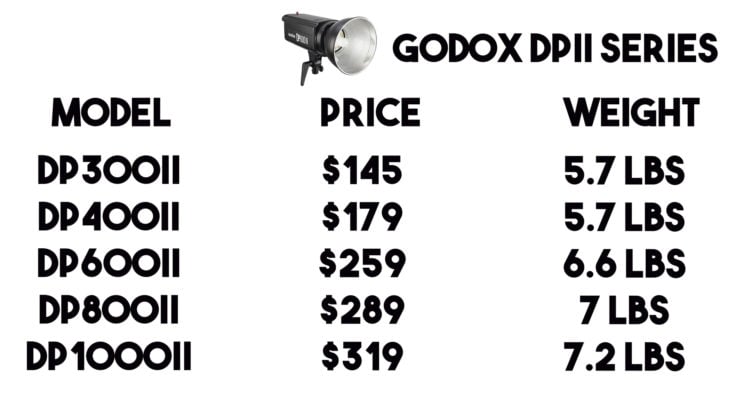 The big issue you’ll have with the DPII series is that minimum power is only 1/16th of a second. So, you’re not going to be using these for those f/1.4 portraits. They’re designed to be a workhorse strobe in the studio at f/5.6-11 apertures. Of course, if you do want to dial them down further, you can always cover the bulb with some ND gels.

Finally, there’s the super low budget entry level strobes, the SKII series. Available in 300Ws and 400Ws flavours for only $109 and $139, these are your absolute entry level strobes. They allow you to get into using them without breaking the bank while still offering a decent amount of power. For years I used a pair of Bowens Gemini 200Ws strobes and they worked just fine in the studio. So, 300Ws and 400Ws strobes will be perfect for many beginners.

Like the DPII series, it has a minimum power of 1/16th, and recycles fairly quickly at full power. While it may not stand up to the daily demands of a working studio photographer, it’ll easily cope for those just learning and figuring things out. And, when you decide to upgrade, you’re not losing a fortune when you sell these (or stick them in a box for emergency backup duty).

Overall, it’s a good range of products that are often overlooked in favour of the more portable AD series. But, if you need studio strobes, Godox offers a fairly complete set of monolights to suit most studio needs.

Personally, I think I’ll still stick to my AD360II strobes, even in the studio. Not having to deal with wires trailing across the ground makes my life a whole lot easier.