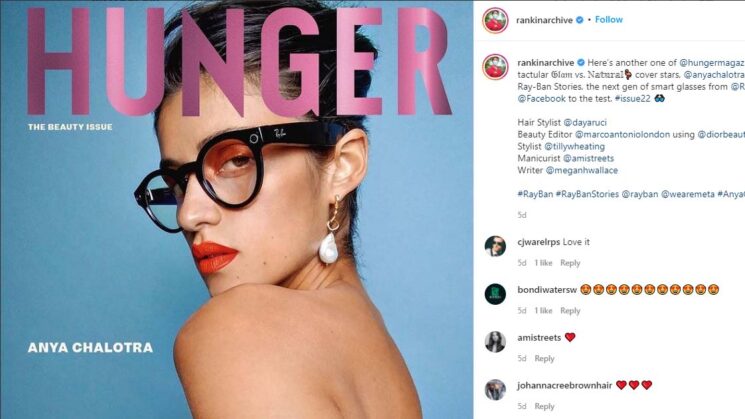 Other than privacy concerns, it looks like Facebook’s and Ray-Ban’s camera glasses have also sparked creative ideas. Famous British photographer Rankin has recently shot the world’s first magazine cover using precisely this little gadget – both as a prop and as a camera.

Rankin used Ray-Ban Stories to photograph actress Anya Chalotra for the latest edition of Hunger Magazine. The young actress, best known for her role of Yennefer of Vengerberg in The Witcher, was posing for the cover while also wearing a pair of these smart glasses. This is one of several alternative covers for Hunger’s Beauty Issue, and you can see them all and order them here.

I’m not surprised by the choice of “gear” for this shoot. Smartphone magazine covers are already “old news:” Sports Illustrated did it back in 2016, followed by Billboard, Elle, Time, COSAS, and more. It was time to try a new gadget for this purpose and see how much one can achieve with a modest 5MP camera. Apparently, if you know what you’re doing you can get quite a decent photo. Something to keep in mind for the next time you think buying fancier gear will make your photos better.