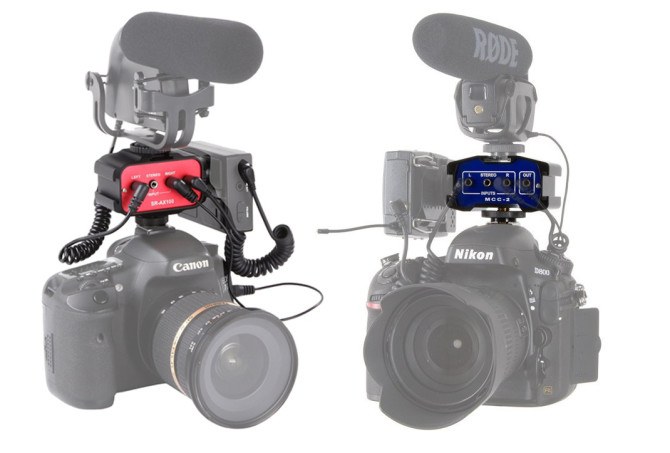 If you are doing a lot of run and gun, you may be recording sound directly to your camera. Now, without going into the question if this is a good practice or not, most DSLRs will limit you to one stereo channel with a 3.5mm mic plug.

But, there is a way around it, and it will not break your wallet (though some will say that it will double your in-camera-audio-recording penalty). But if you are absolutely in a pinch and need an extra channel on your DSLR, you can use a mini-mixer to separate the left and the right into 2 different devices. This one, your right channel will be used by one device and the left channel by another.

Why would you want that? Getting the feed from a wireless mic on one channel and a room mic on the other.

There are several mini-mixers in the market starting from about $50 for a Saramonic SR-AX100 or a $85 for a Beachtek Mcc-2 which sit on the hotshoe and also double as tripling the hot shoe for lights, mics and others. I am not sure I will put a lot of weight on that small connector though.

The plus on those devices, vs making your own DIY channel splitter (which would be quite easy) is the fact that you can control each channel separately.

Is this the best option? Maybe if you are frugal. If you can afford it, I would probably invest a bit more and buy a Zoom H4N or a TASCAM DR-60D which provide many many more features, as well as recording. But this is where we started, no :) ?

Quick Tip – Attaching A Vagabond Mini To A Light Stand