Adobe Premiere Pro is one of the most widespread video editing applications out there. It’s always been a hugely popular application since its initial release. But editing can be a tedious process, especially if you edit for multiple platforms. You need a 16:9 for YouTube and Facebook, a square video for your regular Instagram feed, and a vertical video for Stories and IGTV.

Well, Adobe has been paying attention to the needs of social media video creators and is introducing a new AI-powered Auto Reframe feature to Premiere Pro to help speed up that workflow. We spoke with Adobe Product Manager Victoria Nece at IBC 2019 to find out more about it.

The goal of Auto Reframe is to allow you to create multiple aspect ratios of the same video without having to manually go in and reposition your footage to get the best view. Powered by Adobe Sensei, it uses machine learning to figure out what’s interesting in your scene, and then automatically tracks and reframes the footage for the new aspect ratio you want to output.

Auto Reframe will work on individual clips, sequences and even already rendered videos, and it will also rescale graphics from Premiere’s titler, too. And they say it takes only seconds per minute of video to do it all.

As to when the new Auto Reframe feature is coming to Premiere Pro, the official word is “Coming Soon”, but it should be out by the end of the year. 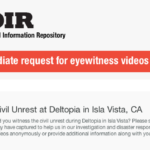