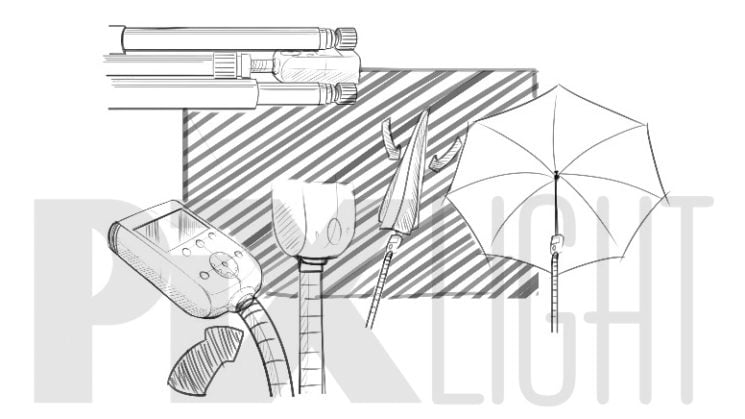 When you’re doing photography projects with speedlights, it can be a hassle sometimes with all the extra accessories you have to carry. Big clunky light stands, flash brackets, the flashes themselves, umbrellas, etc. After a while, you just get used to it and accept it, even if you end up taking out more gear than you’d really like to, especially when your needs are quite small.

Photographer Arash Hamidi decided he wanted to minimise the amount of kit (and weight) he wanted to take out with him on a shoot. So, he decided to do something about it by developing the PiXLiGHT, an all-in-one unit which includes the stand, flash and modifier all in one. 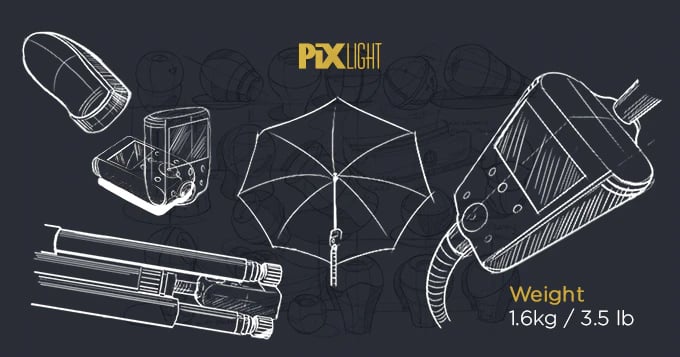 It has a guide number of 58 at ISO100, which doesn’t sound that terrible for the size of the unit. Sure there are more powerful speedlights out there, but you don’t always need them, especially if you’re often shooting indoors or outdoor conditions where you’re not trying to battle the sun. It gives up to 400 shots on a full battery charge, and it’s built with a high-density magnesium-alloy body for ruggedness. The flash is mounted to a gooseneck with a 360° swivel allowing you to quickly and easily set it in the direction you want. 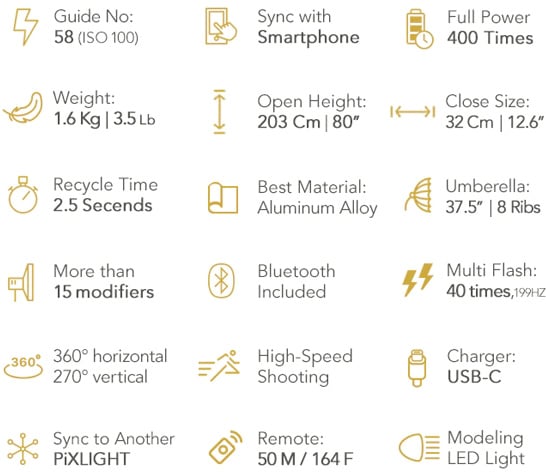 As well as your “real camera”, PiXLIGHT can also sync up with your smartphone’s camera, too, using their app over Bluetooth. It doesn’t explicitly mention it, but presumably, you can adjust the power of your apps using the light when firing from your camera. There is an on-camera transmitter available, too, with a range of 50 metres (164′) which looks like it will also allow you to adjust the power of the lights, too, and they say it’s available for Nikon, Canon, Sony, Fuji, Pentax, Olympus and Panasonic.

As well as featuring a built-in umbrella mount (and you can actually fold the umbrella into it for travel), various other modifiers area available for PiXLIGHT, including spheres, snoots, barndoors, grids, diffusers, gels, softboxes and various others.

Is it going to work for every photographer or every scenario where you might want to use a flash? Well, no, obviously not. But it does look quite handy for, say, event photographers who just want a quick and easy portable light stand that weighs as little as possible and doesn’t need to be hugely powerful. Or for macro, product or food photography, even architectural interiors or portraits. If you need more power, a wider range of Bowens or other mount modifiers, or you’re doing more complex lighting setups, then you’ll probably want to look elsewhere, though.

I do like the concept, although the price seems quite steep for what it is, even with the Kickstarter early bird discounts. The basic package which includes the PiXLIGHT, an umbrella, the remote trigger and a bag to keep it all in is $450. And that’s the early bird price. Regular price is $750, which seems pretty expensive when you consider that for the about same money, you can get a couple of Godox AD200s, 2 light stands, Bowens brackets and softboxes, which although heavier, offers a lot more power and versatility.

For the two-light PiXLIGHT kit, you’re paying $800 at early bird prices, which comes with double everything and a “special bag” instead of the “simple bag”. Again, early-bird price. The regular retail will be $1,550.

For some, though, the cost of this light will be worth the lighter load and more efficient workflow it offers for their needs.

If you want to back the project and get your own you can do so over on Kickstarter, where pledges start at $450 for the one light kit.