One of these days I’m going to get back into shape. Then I’m going to fly to Nepal. Then I’m going to hire a Sherpa to guide me on an arduous journey up into the highest reaches of the Himalayas. Along the way he’ll teach me his language, as well as the customs of his people. By the time we arrive at the summit, we will have saved each others’ lives several times, binding our fates together for all eternity. Sitting atop the apex of the world (beneath a sign that says, “No Flash Photography Allowed”) will be a shriveled old man with a long beard who will explain to me the sorcery and wonder behind the algorithm that determines what’s going to show up as a “suggested post” on my Facebook news feed.

Seems like a long way to go for an answer, but you go where the truth takes you.

Anyway, earlier today I stumbled across this suggested post from a place called the Farmington Historic Plantation. I initially stopped because I grew up near a place called Farmington, but we didn’t exactly have plantations in Detroit. As it turns out, the Farmington Historic Plantation is a small museum and art gallery in Louisville, Kentucky, and is one of three properties that make up Louisville’s Historic Homes Foundation— all three of which are very popular locations for local photographers. It seems, though, that a lot of these photographers can’t follow directions very well, and have– at least temporarily– really messed things up for those who can. 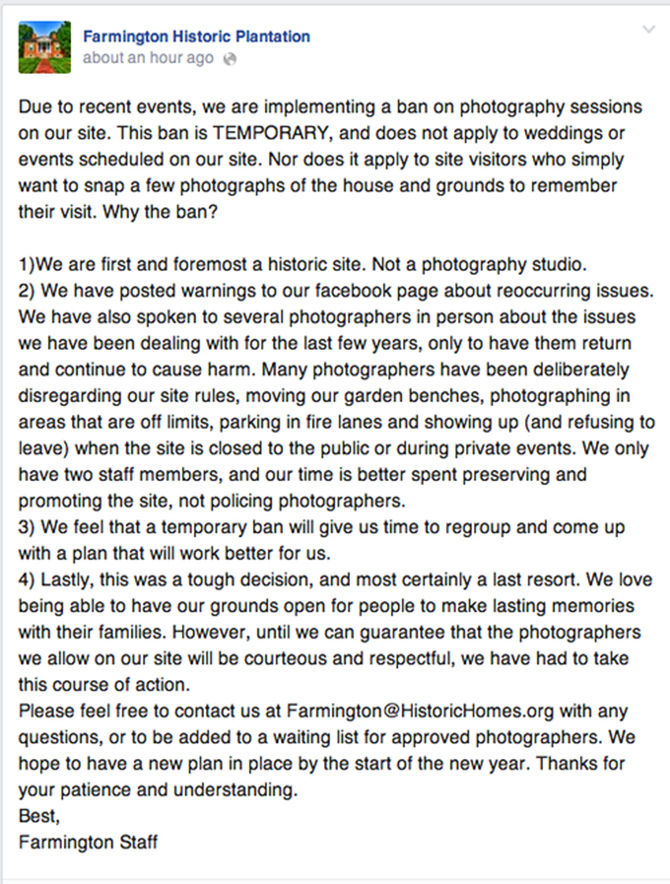 So, apparently photographers tend to do what they want, where and when they want to do it, despite warnings and instructions to the contrary. Does this sound like you or anyone you know? I’ll be the first to admit that I occasionally interpret “No Trespassing” signs as suggestions, rather than directions, but when I do so the only person to face any repercussions is me. When I ignored all the signs so I could sneak into an abandoned prison here in Atlanta, the police officers who showed up would have been well within their rights to arrest me. They didn’t, thankfully, but if they had I would have been the only one affected. Louisville, on the other hand, appears to be running rampant with packs of out-of-control photographers– on the grounds of historic homes, of all places!

I get that we’re all on an eternal quest for “The Shot.” I get that finding or creating something truly meaningful and original gets increasingly difficult. I even get that trying to explain the golden hour, shooting angles, and composition to the two-person staff at the Farmington Historic Plantation is an exercise in futility. But we still need to respect the rules of the places where we like to shoot. Ignoring warnings, moving the furniture, ignoring “off limits” signs, and being an all-around pain in the ass do not forge a path for creative cooperation. Unlike urban exploration and street photography, where you are pretty much the only person who will suffer for your actions, ignoring the rules at popular photography locations screws every photographer looking to create something within that setting.

It would be awesome if our cameras came with laminated cards that granted us magical access to…well…everything. Off the top of my head, I can think of LOTS of places I’d love to shoot. A camera, though, isn’t a license to treat the world like it’s your own personal photographic playground. As truly sad as this realization might be, it’s reality. What it all boils down to is respect. Respect for the location. Respect for the rules. Respect for other photographers. We all know those photographers who refuse to share their super-top-secret locations. For what it’s worth, I find attitudes like that to be narrow-minded, and totally lacking in self-confidence. If you’re that worried about the images I’ll be able to create in your super-top-secret location, you might be in the wrong business.

But I digress. Where was I?

Oh yeah– your camera isn’t your golden ticket into Willy Wonka’s chocolate factory. Like I said– it’s all about respect. I’m sure we’ve all done some crazy stuff along the way for a great shot.  We sneak into places we don’t belong. We ignore warning signs. We taunt the gods of photography, safety, and common sense, daring them to mess with us. And that’s okay, to a certain degree. But when our actions have a negative impact on other photographers and their ability to work, we need to step back and take a professional, objective view of what we’re doing. Local photography communities tend to be rather tight-knit, at least in the sense that word travels fast. The very last person in the world you want to be is the pompous ass who shut down a location for the entire community.

While I’m on the topic of obeying the signs, let me throw in my own two cents about railroad tracks. You know what railroad tracks are for? Railroads! Multi-ton steel behemoths that cannot possibly slow down in time to avoid killing whatever happens to be in their way. Even if they seem abandoned. Even if you don’t see or hear a train. I’m tired of seeing stories in the news about people getting killed on railroad tracks during photo shoots. And yes– it does happen more often than you think. Besides– that pensive, moody railroad track portrait has become a cliche, and you’re better than that.

Read the signs. Respect the location and your colleagues. And stay safe.

Why Light Trumps Location in Photography