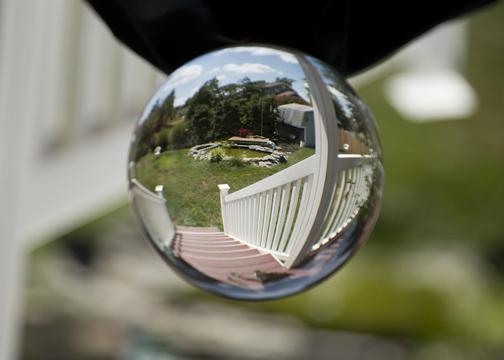 Have you ever seen an interesting photo of a clear globe and wondered how to create such an image? This article will give you a few tips on how to take crystal ball photos.

You can use a crystal ball to get a fisheye effect without the expense of buying a fisheye lens.

One of the ideas I picked up from another blog on photography suggested that you’ll get interesting results if you include a fence in your photo.

In the photo above, I set up an old tripod with a black cloth on top and carefully balanced the ball upon it. I took the shot from a deck with a roof, close to steps that lead down into my backyard. I rotated the image 180 degrees to have the steps appear upright in the final image.

Next I carefully carried the ball and its padded stand (it weighs over 10 lbs.) downstairs to my billiards table to do a still life photo. It took a bit of adjusting the position of the rack of balls, as well as the crystal ball, to get just the right kind of effect.

My goal was to try a variety of shots to get a few visually interesting images, and most of all, just to have fun trying something new. 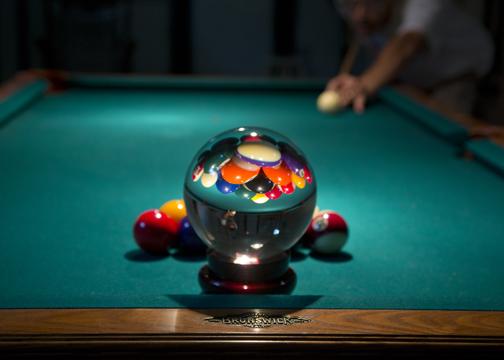 My second photo shoot of my crystal ball started early the next morning before sunrise. I parked in the parking lot of a nearby bank and set the globe on top of its stand on my car’s roof. I shot upward so that the morning sky and pink clouds would become the background. 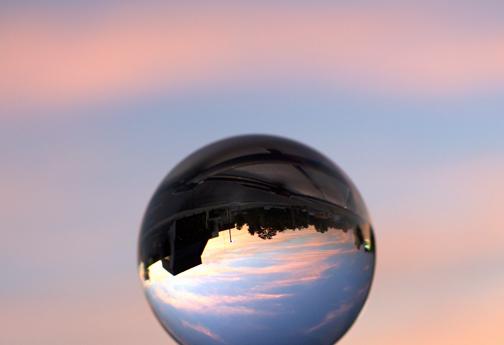 From the bank, I traveled about a mile to a small lake. I set the ball on its stand on a picnic table near the shoreline and got this interesting lake and its reflection of the morning sky.

This is another example where just a small movement in the position of my camera had a big impact on how the background was situated behind my main subject. I settled on this camera height as the most interesting play between the background and the sphere. 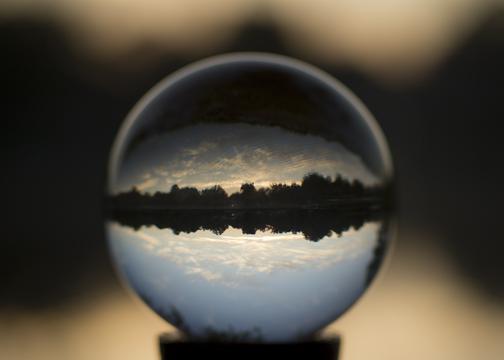 I then drove to a large parking lot as the sun was rising and photographed the crystal ball on my car’s roof again. This photo included the direct sun rising over my globe as well as rising above the treeline. 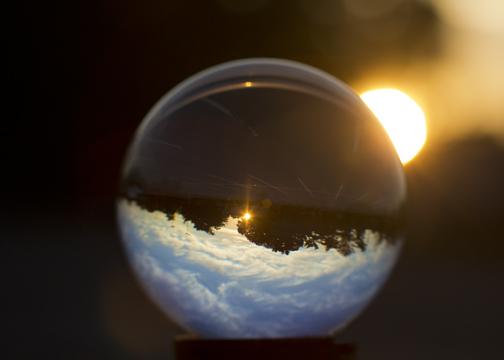 Once the sun was up higher in the sky, I abandoned parking lots and headed for a hike in the woods. The canopy of the trees greatly reduces reflections of the sky on the surface of the globe and makes the fisheye distorted subject more prominent in your image.

The first image I took was in a spot that I knew would be interesting even before I entered the wooded park. I’ve run and hiked the trail dozens of times, and I knew where this fallen log was close to a golf course. I used a convenient knot in the trunk to hold the ball in place. 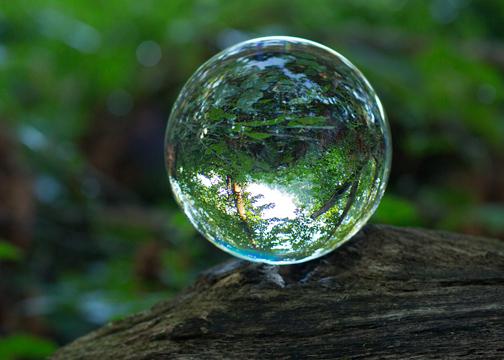 The second image I created was near a section of fern plants deeply nested within the park. I confess on this photo that I had to rotate a decaying log into position to create a soft and secure spot for my precious quartz sphere to rest on.

I then positioned this fern branch in place to add a little visual interest and depth into the image. These two nature images turned out to be my favorite photographs from the whole crystal ball shoot. 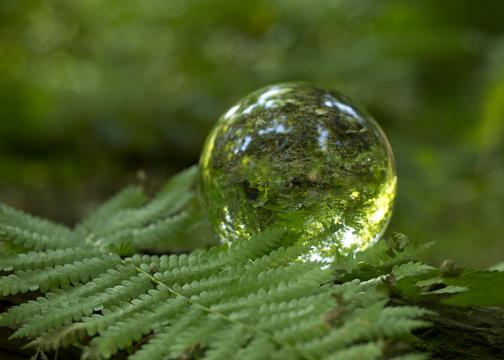 Where to get a crystal ball for photography

I’m a member of Amazon prime so I read several reviews and decided on a 6 inch quartz sphere that had very positive feedback from buyers. I buy a lot of merchandise from Amazon, but you can also find a big selection of crystal balls on eBay.

I used two cotton cloths whenever I moved my crystal to prevent scratches and fingerprints. When I went on the hike with the crystal ball, I stowed it in its own compartment within my camera backpack.

I ended the crystal ball shoot with a Crystal Ball Selfie Photo in my home studio. I started with a white background but ended up choosing the photo using a black background as the stronger image. I liked the contrast of my bright red t-shirt against the darkness. 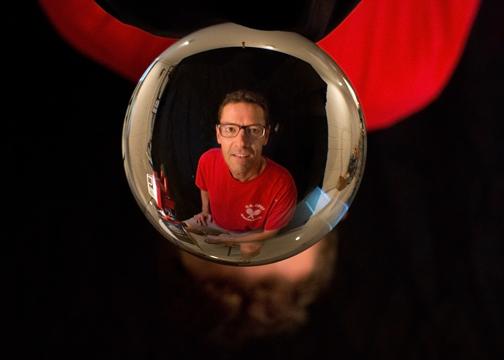 All of these photos were taken using a Canon 70D and Canon 85mm f/1.8 prime lens.

It was a lot of fun playing around with a new concept in photography. I had purchased the quartz sphere 5 months previously, and it was about time that I did something with it.

Bruce Lovelace is a Family Portrait Photographer based in the US. He also runs the digital photo tips and canon camera geek blogs. You can connect with Bruce on his G+ profile

Quick Tip: How To Protect A Cyclorama With A Tennis Ball
« Sigma Art Lenses – Great glass, shitty bokeh.
Is putting a darkroom in a bar a good idea? Guess we are going to find out »