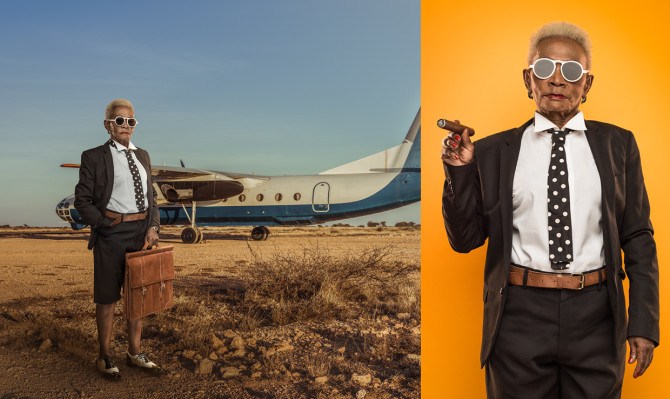 This is the story of Kenya’s League Of Extravagant Grannies, who were once corporate and government leaders in the 1970s. They now live the retired high life travelling to exotic and remote areas within Africa to explore, party and enjoy in exclusivity.

We managed to catch up with 3 of them in Somalia soon after they landed. Little is known about them till now…

This backstory is, of course completely false, but it’s a compelling idea to explore, which is exactly what Kenyan photographer Osborne Macharia did.

DIYP caught up with Osborne to find out more about him, and the project.

I’m a self taught commercial and advertising photographer born and based in Nairobi, Kenya.  I have a bachelors degree in Architecture but cannot design a house to save my life.  Halfway through Arch school I failed a unit and had to stay out for one academic year redoing that unit so I had lot of free time.  I was always into art and graphic design being fascinated by images but never thought of photography as a means to an end.

One time I stumbled upon the work of Joey Lawrence and that’s what changed everything.  This was after he published images from Ethiopia.  I had never seen photography done like that with such dynamic lighting that evoked emotions.  This then began months and months of research and looking for YouTube videos and online tutorials.

I was good at making Architectural paper models which I make for Architectural firms and channel the money to buying photography equipment.  This went on for almost 3yrs before photography could sustain itself.

This is my 6th year as a photographer.  I have come to specialise in Advertising and Commercial work, a bit of product photography and now my personal art projects which are portraiture based.

And Osborne’s come a long way in only six years.  When asked about the inspiration which brought about the conception of this idea, he told DIYP…

This was supposed to be a sequel to an earlier project I did in 2014 called Nywele Za Kale (Hair of Long Ago) that was predominantly old men.  As we were on assignment in Somaliland with my friend and stylist Kevin Abraham, we can across this retro old-school plane and I knew for sure the shoot I was planning with the grannies would tie in with the backgrounds.  On our flight back to Nairobi we planned and strategised the entire trip.

This was back in December.  We resumed the conversation in January and began sourcing for models, wardrobe and accessories.  Getting the grannies to understand what we wanted to do took quite a while but luckily they agreed. 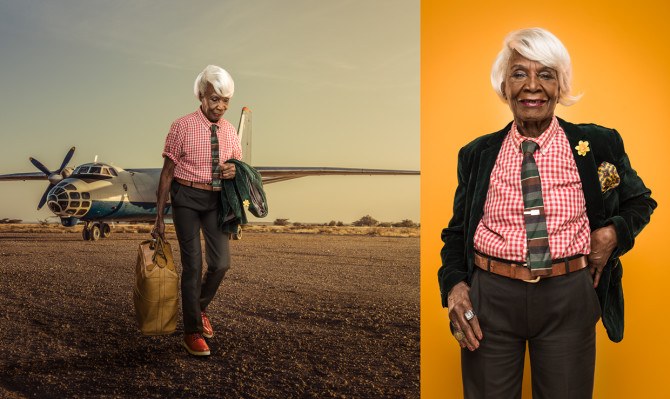 The models aren’t typical of those most photographers would shoot.  DIYP asked Osborne how he went about finding models for this kind of a shoot.

I tasked Kevin Abraham with that job.  He’s been my go-to guy when it comes to finding models for most of my ‘unconventional projects’.  I dont know how he does it but he always delivers.

While we were shooting, one of the grannies felt uncomfortable after seeing the first two being done for make up and she pulled out.  Luckily one of the guys (George) who was doing sound for the BTS video called his granny who was not far from our studio and within 2hrs she was on set.

I have to say she really pulled it off considering she had long hair which we transformed into a mohawk. You have to be patient with grannies and explain to them slowly on what you are doing. Direction is key. 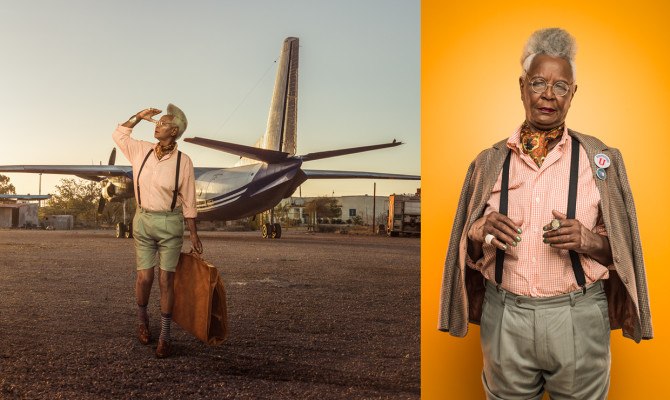 Obviously, for a shoot like this, working with several models, you need a good crew, for many reasons; hair, makeup, stylists, assistants, etc.

Very true.  You also need to be a good leader and visually direct your team on what you want to achieve.  Mood boards are key before every shoot so that you are on the same page.

I have worked with Kevin Abraham for the past 3 years on most of my personal projects as my stylist, model scout and costume designer.

I have also worked with Richard Kinyua for the last 2 years whenever I feel hair is key in a shoot.  He’s brilliant at what he does and does it with such little effort.

This was our second shoot with Valary Mdeizi, who I was introduced to by Kevin.  She specialises in special effects make up.  When I saw her work last year I knew for sure we had to work together.  She’s amazing.

Inspired by Joey L., it makes sense that Osborne would follow the path of medium format.  He told DIYP about some of the equipment he used for this project.

I used a Hasselblad H5D-40 + 80mm lens for this.  This has been my go-to combination for most of my personal projects for the last 3 years.  You immediately fall in love with its colour tones especially on dark skin, dynamic range and level of detail you get on a single frame.

In terms of lighting I use Profoto B3 which is a powerful unit for both studo and location for the work I do.  As for modifiers I have a range of Elinchrom Rotalux’s which I got Profoto adapters for.I love how easy they are to set up and very light.

We also briefly discussed his post processing workflow, and things to keep in mind when compositing subjects shot in the studio with real world environmental backgrounds.

Most times I’ll shoot tethered using Lightroom which has a plugin for Hasselblad.  I’ll do light colour correction, lens correction and colour toning before exporting them over to Photoshop for the more intense retouching which include Dodge and Burn.  I hardly use curves.  I think I have somehow carved my own workflow over the years and its worked for me.

If its composites I am working on then Photoshop is where it happens.  Yes, the shots of the planes were composites.

One important thing to consider when shooting for composites is to always align your studio lighting with what’s on your background images.  Sometimes they never align perfectly but getting close works perfect.

For this particular project, the light changed with the different angles of the plane and so we had to adjust the lighting with every model we shot.  I used 1/2 CTO gels to give that sunset feel to the images.

DIYP would like to extend a massive thank you to Osborne for taking the time to talk with us and tell us more about this project, and well done to all the crew involved for creating a great set of images.

« Adobe announces Adobe Camera Raw 9.5 and Lightroom CC 2015.5
Turn a Peli case into a tether station with the help of a $2 bicycle quick release bolt »